“One can understand the railroad in engineering terms, as the history of trains and tracks, or in architectural terms, as stations and freight yards, or in urban planning terms, as the right and the wrong side of the tracks, without fully capturing its social history as the production of space.”  — from The Power of Place by Dolores Hayden Among the railway cuts examined throughout my research, International Gardens came to be an example of how these types of environments could exist and be somewhat functional when community residents of the surrounding neighbourhood come fourth to maintain, clean up, use and care about them. International Gardens also shows the limits of community engagement without a proper long-term plan, multidisciplinary approaches, or youth integration, as well as the importance of city backing and complications due to lack thereof on initiative such as this.

Between Riverside Drive and Elliott Street adjacent to Cameron Avenue is the space commonly known as the CN/CP railway cut, Gateway Community Park, Fujisawa Public Garden or International Gardens. The property is still owned by CN/CP Partnership, who agreed in principal to allow local realtor Jack Renner the right to enter in 1999. The idea was to convert sections of the abandoned railway cut into individual international gardens, honouring Windsor’s twin cities around the globe. 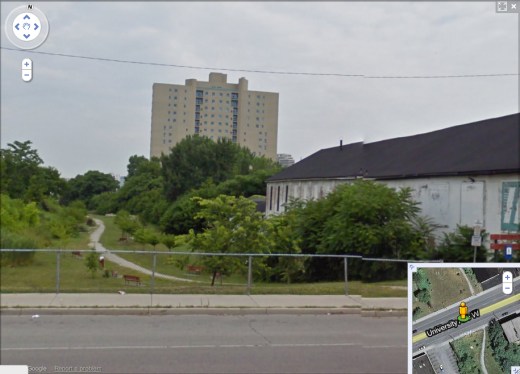 The transformation of this abandoned rail line is still in the ‘developmental stage,’ and updates have not been made to it since 2007. Currently, only one garden has emerged along the railway cut between Riverside Drive and University Avenue. There are vague plans to redesign the cut between University Avenue to Wyandotte Street which have yet to materialize. (A History of Windsor’s Parks, Gateway Park Website) This space in particular will be discussed next week.

Plans to transform the overgrown area between Riverside Drive and University Avenue into a park were initiated by Jack Renner, a homeowner within the immediate vicinity of the railway cut and local realtor whose aspirations were to revitalize and beautify the neighbourhood. (Windsor Star)

The Fujisawa Public Garden was built to pay tribute to Windsor’s twin city, Fujisawa, Japan. In recognition of the tenth anniversary of the twinning of the cities and in celebration of the approval of the garden, many Japanese dignitaries and members of The Canada-Japan Society, with which Jack Renner is afiliated, visited Windsor in 1997 for the ground breaking ceremony. In 2001, with the help of a grant from Human Resources Development Canada and the loan of some equipment from the City of Windsor’s parks and recreation department, the Multi-Cultural Council cleaned up the area, cut the brush and installed some park benches. In 2002, with a donation from the Consul General of Japan, several Japanese flowering cherry trees were planted in the area designated for the Fujisawa Gardens. (Gateway Park Website, Windsor Star) Renner decided to tackle the entranceway, the land on the corner of Cameron and Riverside, which at this time was a barren, unattractive, empty lot. Calling it the  Gateway Park project, it was meant as a gateway to the International Gardens. A considerable cash contribution from Renner, the financial generosity of area businesses, cooperation from the City of Windsor, the help of a local nursery and sweat equity of the neighbourhood made the project possible. According to the Windsor Star, Renner’s inspiration for transforming the space comes from the late Bert Weeks, an avid gardener and former mayor of Windsor, who had spearheaded the development of nine city parks during his long political career.

“Public space now exists along a continuum of coercion and exclusion mediated by legal restrictions, which include bubble zones around…the complex public/private ownership of parks.” — from Speaking for a Long Time: Public Space & Social Memory in Vancouver by Adrienne Burk

Gateway Public Park’s status is both Community Park, since it is not owned by the city, and nonprofit registered corporation. No tax payer’s money goes in to this project. This could be seen as a good thing, but really the lack of City of Windsor support for this project is an issue, complicated by the fact that this space is privately owned yet is being used as public. The city has not provided any funding or physical labour to the initiative. The extent of their involvement has been the donation of some tools to clean up the area prior to construction. The city also does not maintain the park in any way. All of the maintenance is left to the residents of the neighbourhood. When I went to visit International Gardens/Fujisawa Gardens/Gateway Park, the physical condition of it was rough. The garbages were overflowing and dumped onto the soil, it seemed as though someone had been setting them on fire.

“For the community member or local resident, it means being willing to engage in a lengthy process of developing priorities for a place, and working through their meanings with a group.” –– from The Power of Place by Dolores Hayden

Renner’s priorities of beautification for the cut, as a realtor and homeowner in the neighbourhood, are a cause of some of the issues surrounding International Gardens after completion. Although beautification is a starting point for changing unsafe environments, it shouldn’t end there. I suggest that a relational approach should have been taken with this project. Beautification should be paired with a good design plan. Preliminary surveys and studies on the social, environmental, geographical and historical aspects of the surrounding area should have been completed by multidisciplinary experts (or non-experts) and integrated into the plan prior to any groundbreaking. “..environmental incivilities such as litter, graffiti, abandoned or burnt-out cars, drug needles, broken fences and vandalized buildings which signify a lack of social control and ‘ownership’ of public space.” — from ‘But is it Worth Taking the Risk? How Women Negotiate Access to Urban Woodland: A Case Study’ by Jacqueline Burgess out of New Frontiers of Space, Bodies and Gender. Students are great for this sort of thing. Networking with pre-established organizations and institutions such as The University of Windsor to get students in disciplines such as environmental studies, geography, local history or visual arts to contribute to the design and even construction of the park would have been beneficial in the creation of a park that is both useful, sensible, practical. If the people who would be using the park were considered alongside the already established architecture of the location, the park could have been made safe for everyone who might use it. Visibility from road-level and proper lighting probably should have been an important factor to deter illegal or shifty activity from happening. Although the idea of a highly pruned Japanese garden makes sense for a space that has constant maintenance and upkeep, those resources just aren’t available in this location. Preserving the natural vegetation would help create a sustainable design for the park that would not need strenuous amounts of upkeep over the long-term. Neighbourhood youth have re-designed this hill upon which the cherry trees donated from the Canada-Japan Society have been planted into a bike ramp. A staircase leading to riverside drive, the only exit if one were to be cornered in this section of the cut, had been chained off, deemed as unsafe for use. Along the entrances to the park, signs designate this space for pedestrians and cyclists only Signs on rocks are exemplary of design features prescribing use that highlights aesthetic beatification rather than function.

One man can do great things, as demonstrated by many sources pertaining to transformation of this abandoned railway cut into International Gardens/Gateway Public Park over the past ten years. However, collaboration and networking with a wide range of relational disciplines would have made this park so, so, so much better. It probably would have been slow-going at first, but instead of a quick fix aesthetic solution, a sustainable and useful place could have been created over a long-term plan. Community outreach and youth engagement are important factors when trying to do great things. Atkinson Park is the result of an ongoing community grassroots initiative with active youth involvement. Although this space is very much gendered in use (rarely any women using the skate park or  the soccer fields), it is also functional. Atkinson Park could serve as a model for other park initiatives in the city. With a public initiative such as this, it is important to get kids involved early. Having a connection to the development of the project will encourage them to not only care about their surroundings but also grow to be successors, increasing the sustainability of the park. Teenagers and youth involved in the process of planning the park are more likely to continue the legacy in maintaining it. Establishing incentives or goals to helpers and collaborators such as shared meals will build pride amongst them. Food brings everyone together.

2 Replies to “The Creation of Place in Abandoned Railway Cuts in Windsor: 2/4 International Gardens”