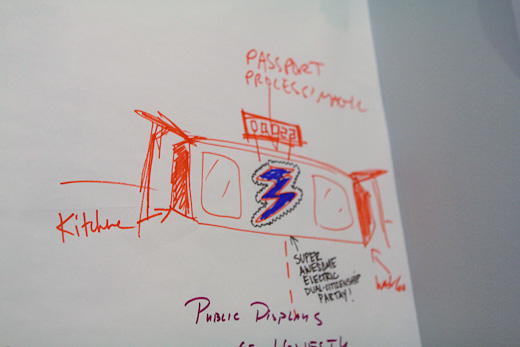 We’ve noted before that we’re working on a proposal for CAFKA, as we’re interested in the border between Kitchener and Waterloo. Though certainly every place is bordered with another, it’s the kind of K-W relationship that intrigues us, as we’re wondering about the potential possibilities in thinking about Windsor and Detroit as D-W.

We’re wondering about examining the process of  instigating a formality that addresses one’s existence in a bordered-region that (at least from the outside) imagines itself as one coherent region to attempt to, in the first instance, create an analogy to the way that the border-complex exists here with the increasingly arduous reality of crossing the border between Windsor and Detroit, and in the second instance, imagine that changing this was as simple as creating a one-stop office to attain a regional dual-citizenship card / document / visa of some sort.

This also extends into our increasing focus in unfolding what shapes locality, and perhaps, by overlaying local concerns over other places, we might find new ways of thinking about the way locality is created here in Windsor.

Plus, we’re really interested in building some thing soon.