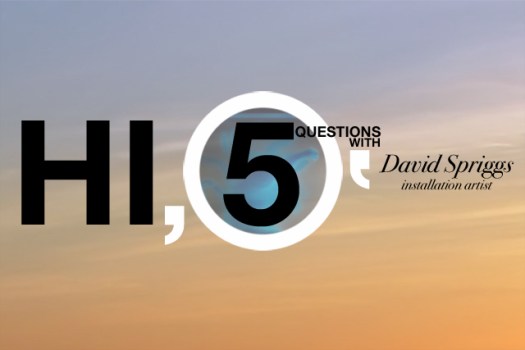 Hi, 5 (5 Questions) is a web-only interview series which presents five questions to artists, activists, and creative thinkers alike. The project acts as an educational device which allows us to gain insight into the narratives that define successful individuals. We are interested in the motivations behind ambitious ideas and how these individuals chart personal change in relation to their surroundings.

David Spriggs explores the representation and strategies of power, the symbolic meanings of colour, and the thresholds of form and perception. His installation based work lies in a space between the 2 and 3 dimensions. In many installations he uses a technique he developed in 1999 using multiple painted layered images in space to create unique ephemeral like forms. The subjects depicted in his work relate to the breakdown and recreation of form and volume – as seen through his interest in cyclones, explosions, and forces.

I am a contemporary artist working primarily on installation based work.

I have been through many different styles in my life as an artist.  I tried everything to find out what works and what doesn’t.  My thinking has lead from concept to another.  12 years ago I started thinking about transparency, then about 8 years ago concepts around the immaterial and perception, and more recently on concepts of power and the symbolic notions of colour.

The theories of the Futurists and Cubists have been interesting to me.  I have been perhaps most inspired by writers such as Baudrillard, Virilio, and Foucault.

I would say that it is not so much political beliefs as much as being informed about the world, the general news, and advancements in science and theory.

A city is a changing organism that keeps it’s community alive.  I would like to think culturally that a city provides its citizens a network in which the arts can flourish.