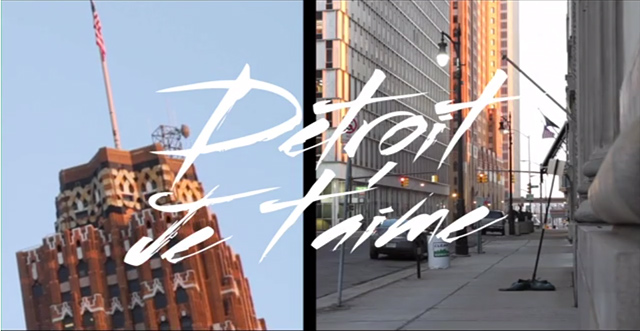 Nora Mandray (director/producer) and Hélène Bienvenu (co-producer) are part of a growing group of people who believe that Detroit, MI, is a laboratory for the city of tomorrow. They’re a duo of French filmmakers/journalists, and they’ve been working for over a year on an interactive documentary project supported by the French Film Institute. DETROIT JE T’AIME tells the story of the DIY spirit that’s leading the Motor City’s transition from the assembly line into a new collaborative economy.

DETROIT JE T’AIME is an interactive documentary that weaves together three stories of com- munity-building in the post-industrial era. It follows a group of female mechanics, an urban farmer and an activist hacker who are each working to transform Detroit into a sustainable city through small-scale DIY projects.

* DETROIT JE T’AIME will be broadcasted on a website made up of a series of web pages or “screens.” Each screen will feature a video.

* When you decide you’re finished with a page, you’ll click on the next one. You’ll be taken through the documentary at your own pace.

* At anytime, a “DIY toolbox” will be available in the corner of the screen. The “DIY Toolbox” will adapt itself to the story: guidelines and tools will suggest you to start similar projects depending on what’s happening on the screen (be it a community garden, basic bike repairs, or an LED light project.)

* You’ll be able to share ideas from the film with your friends across social networks.

* Through each screen/video, you’ll have access to a different Detroit neighborhood — historic background will be provided through datavisualization, interviews and/or archival footage.

There’s also a Kickstarter page (they’re looking for funding until the end of July 2012).

And, on the short video above:

Detroit and Lafayette Coney Island has the best coney hot dogs in the world (so say Detroiters). The chili, mustard and onion topped super fast treat is a Detroit staple that simply can’t be argued with. Whether occasional delights on the way to a Red Wings, Tigers’, Lions’ game or daily food, the experience is pure Detroit. The classic style of the small Downtown space recants the Motor City glory days, the customers joke with the Yemeni cooks and the waiters do magic tricks… Mind you it’s hot!