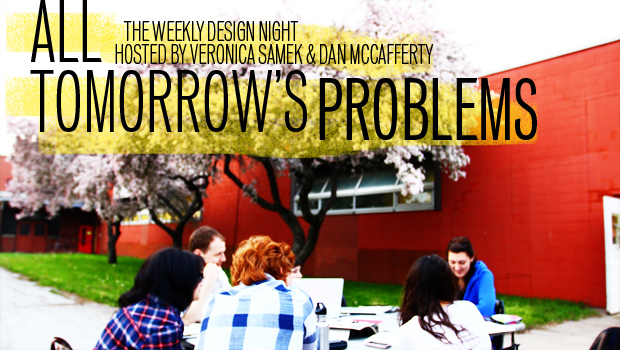 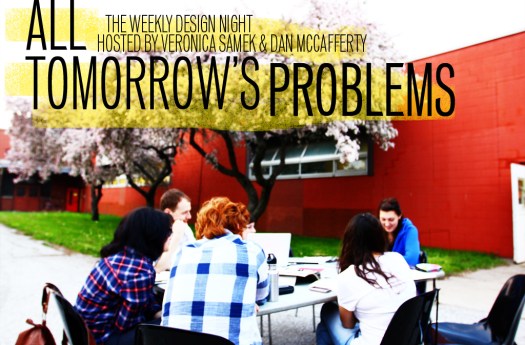 All Tomorrow’s Problems: the Weekly Design Night for Future-Focused People

We’re hosting another round of All Tomorrow’s Problems (ATP), a weekly Design Night focused on creative and speculative problem solving.We’re going to kick things off by picking up where we left off in 2012, working through the future of local transit and mobility issues, and then moving onto other expansive and localized future-focused issues.ATP focuses on collaborative, Windsor-focused problem solving and project making, informed by weekly discussion and design nights. We’re looking for collaborative critical thinkers, problem solvers, and action-takers with an eye on the future of this city.

BCL’s Visiting Researchers/Designers Dan McCafferty and Veronica Samek will guide a 1–1.5-hour open studio every Monday, which will involve discussions, walks, field trips, rapid prototyping and wrap up with an exhibition, installation or beautiful intervention in the summer of 2013.

Plan to bring the following:

The dates to mark in your calendars:

Didn’t this already happen?
Yes, it did. We had a great response and many inspiring ideas were developed during the first iteration of ATP, from September 2012–December 2012. The Second / Spring installment (February–April 2013) will be focused on turning all that thinking and inspiration into action and tangible projects. We will focus on making things happen and projects that address our concerns.

You know that the name of this is really similar to All Tomorrow’s Parties, right?
Yes, absolutely. We appreciate the tone of that event and thought it was a nice way to reference doing things at a different scale.

Do I have to be prepared to make art or design anything?
Think of this as a very loosely organized place to discuss and exercise your ideas on a specific topic. We may not actually make something every night, but we will aim to creatively respond to the issue at hand. Ultimately, our thinking and discussions will materialize into something.

Do I have to commit to attending every design night?
We understand schedules change, so you are free to participate as your schedule allows. But YES… plan to attend as much as possible. Let’s make stuff happen. We need you at the table!

Who are these people anyways?
Long-time Windsor-Essex resident, Veronica Samek, first began her career journey unknowingly overseas. After graduating from the University of Windsor, she worked in England where she uncovered a passion for telling the Windsor-Essex story.  Shortly thereafter, she returned to studying Journalism Print & New Media at St. Clair College and began helping others find their career paths as the Director of Communications for Workforce WindsorEssex. Through her work with this organization, Veronica is committed to a holistic approach to workforce development, emphasizing the importance of living, working and playing in a region with deep roots and a transformative pallet.  Veronica is a member of the United Way GenNext Committee and a founding member of the Awesome Windsor-Essex Foundation.

New to the Windsor area, Dan McCafferty identifies as a Winnipeger, though he has also called Ottawa, Halifax, Toronto, Chicago and Raleigh, “home.” Dan is a multi-disciplinary designer, artist and researcher who teaches Design in the Art and Art History Department at Wayne State University, in Detroit. He co-founded the critical design collective Public Design Unit in 2011 and their first project, Parkdale Versions, was installed at Toronto’s Nuit Blanche. His interests include relational, critical and speculative art and design practices which are participatory, socially engaged and community oriented.