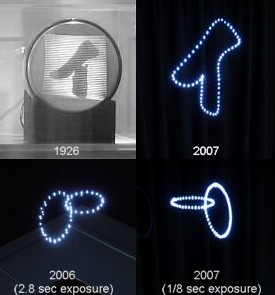 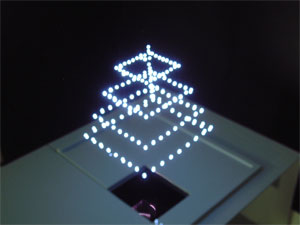 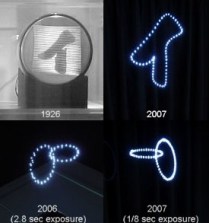 In 2006, AIST (Japan’s National Institute of Advanced Industrial Science and Technology) developed the first 3D image projector. “How does it work?” you say? From Pink Tentacle:

The newly developed device … creates “real” 3D images by using laser light, which is focused through a lens at points in space above the device, to create plasma emissions from the nitrogen and oxygen in the air at the point of focus. Because plasma emissions continue for a short time, the device is able to create 3D images by moving the point of focus.

Essentially, the laser IGNITES AIR to create a pixel. So, I wouldn’t suggest touching it. lawlz.

Here‘s one more article about the update of the projector. 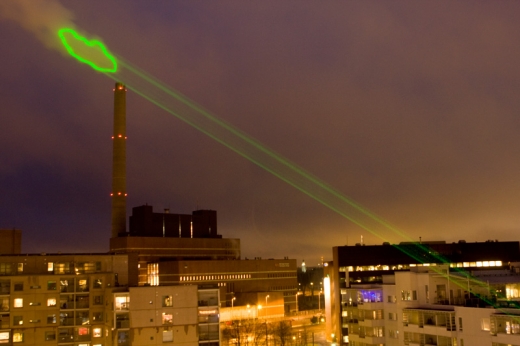 Nuage Vert was a multi-year project that was first conceived in 2003 and eventually realized on Friday 29th February, 2008, between 7-8pm in Helsinki, Finland by the artist duo,HeHe (Helen Evans and Heiko Hansen). During this time 4,000 local residents reduced their energy consumption by 800 kVA, the equivalent of the power generated by one windmill running for one hour. Using a laser animation, data describing the power consumption of the coal power plant, was projected as an outline of the cloud onto the exhaust from the coal power plant, which grew as power consumption went down. The project was massive in scale, not only physical logistics, but also in creating partnerships between the artists, government, and business.

“Nuage Vert is based on the idea that public forms can embody an ecological project, materialising environmental issues so that they become a subject within our collective daily lives … Nuage Vert is ambiguous, as it doesn’t offer a simple moralistic message, but rather tries to confront the city dweller with an evocative and aesthetic spectacle, which is open to interpretation and challenges ordinary perception .. [it] alerts the public, generates discussion and can persuade people to change patterns of consumption. ”

The scope of the project is incredible in that they were able to secure the permission necessary to do the projection, as well as having access to the data of energy consumption, and the chance to make this a public event. Not that any of those things should be incredible to achieve…

Visualizations have the potential to be incredibly powerful, helping us to understand issues and see potentially hidden connections between things. Bruce Sterling wrote as part of his Viridian Design Principles, that one should try to “make the invisible visible.”

Amateur Human is a group and/or single individual artist/designer who is making a variety of accessories to help to visualize and understand our energy consumption and effects thereof. The project pictured above is called Puff, and attempts to give the driver feedback on the amount of pollution coming from their tailpipe. Other projects include a fuel tracker and energy bank. Apparently these projects may also be made available as instructions to re-create them.

The person behind this is Karolina Sobecka, and I came across her site through another link to this other project she did, called Wildlife. From her website: “At night projections from moving cars are shone on the buildings downtown. Each car projects a video of a wild animal. The animal’s movements are programmed to correspond to the speed of the car: as the car moves, the animal runs along it speeding up and slowing down with the car, as the car stops, the animal stops also.”