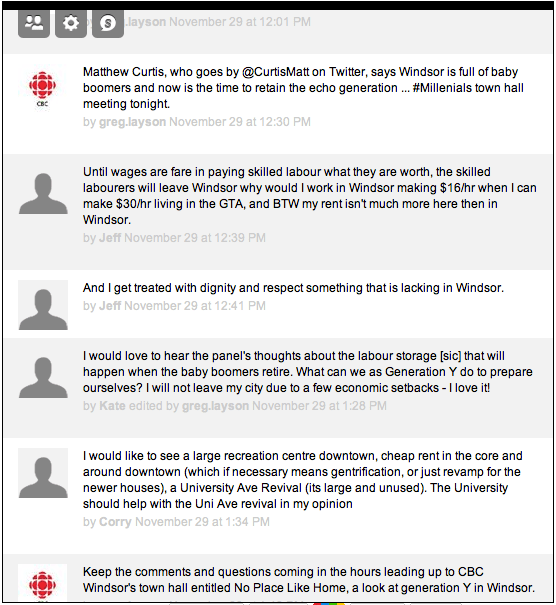 Last Tuesday I had the pleasure of attending the first CBC Town Hall Meeting at the Capitol.

The meeting was really interesting. The event was about an hour long and included a panel and video interviews. The panel itself was quite impressive, consisting of Mayor Eddie Francis, Coun. Al Maghnieh, marketing professor Vincent Georgie, Michael Lomonaco of Grand Rapids, and University of Windsor Assistant Provost David Bussiere.

During the discussion, you had the option of tweeting or Facebook messaging @CBCWindsor questions or comments and some of them got displayed on the big screen. You can check out what went up here.

I think if this meeting had a theme song, it would be called “This is a Great Place for Young Entrepreneurs” as that’s what I kept hearing again and again throughout the night. The meeting’s focus was mostly about jobs; there were videos from “millenials” (aka those from Generation Y, born from the 70s to the early 2000s) who had started up their own businesses, particularly the Priced Green stores and a massage clinic on Ottawa street. There was a lot of talk about how Windsor is a safe haven for young entrepreneurs as cost of living is low and therefore risk in investments are also low. The presenter from Grand Rapids, Michael Lomonaco echoed this sentiment when he talked about how successful his business, a technology firm, has become and how Windsor can emulate this success. Another theme of the night was white collar jobs. Windsor apparently doesn’t have enough of them, especially in the downtown core, and steps are being taken to fix that.

There was some talk about the public transportation system. Someone asked via Twitter why exactly the streetcar system had been abandoned in Windsor, and there was no good answer. Someone mentioned that if we did bring the streetcar system back, it would be mostly for tourists. I disagree. I believe it was either Greg Layson (who was responsible for tweeting the event) or Al Maghnieh who said that there are talks in the works between Transit Windsor and the city for transit reform. I really hope this happens as it would be amazing to see transit reform, especially with all these talks of revitalizing the downtown core. However, discussion of transit was sort of out of context for this meeting. Transit in Windsor really deserves a meeting itself, and it wasn’t fair to try to address the issue on Tuesday.

The amalgamation of the library and art gallery was discussed, mostly by Mayor Eddie Francis. He mentioned that bringing the arena downtown was a strategic move and was responsible for the expansion of the casino and Windsor Water World. The aquatic centre was hailed as a new way to bring tourism downtown.

And finally, discussion of arts. In short, there wasn’t much. A few people pointed out that there wasn’t much to do in Windsor in way of concerts. It was mentioned that there weren’t a lot of arts driven events happening in Windsor. Another point was made that there isn’t communication about city reform happening in the city. Tom Lucier tweeted ” there already ARE dialogue driven events…this is the plague of our city…cluelessness about what already happens!” He’s right. But besides that, all I heard was that “Windsor is a great place for artists because it’s cheap to live here.” Sure, it’s cheap to live here, but it’s really difficult to live as an artist because there are no studios and there is no funding. It’s great that it’s cheap here but if there is not access to a vibrant artist community with materials and funds and means to sell, artists are not going to come here.

I have to say I was disappointed with how the night ended. There was no discussion of any of the presentation. The panellists presented and that was it; there was no question period for any of the presenters. Although there were video cameras that interviewed some of the audience at the end of the night, it wasn’t enough.

Here’s the thing: about 200 people attended this town hall event. People like Shane Potvin (Spotvin), Tom Lucier, Rino Bortolin, a bunch of university students, and many more people who are making a difference in Windsor that I didn’t see or don’t know the names of. And a majority of the people attending the event were young. I know what the city is doing for Windsor, but does the city know what we’re doing for Windsor? The tweets weren’t enough. The town hall meeting had 200 voices that weren’t heard, who surely had great ideas or were at least interested in getting involved because they came to the Capitol on a dreary night with half the streets in Windsor flooded. I’m sure the audience at least had interesting questions, but there was no dialogue. That’s a complete shame.

In addition to this, the dialogue seemed to be all about people who are just graduating university. I don’t think that’s where we should be convincing people to stay in Windsor. Half of my friends in high school hated Windsor because “there was nothing to do” (whether or not this is the case, however, is another essay). Selling Windsor as a haven for young entrepreneurs is not going to fix that.

However, I certainly had an idea in my head of what the meeting would be. There was nothing that told me that there would be critical discussion, or and discussion at all during the meeting. So in part, my disappointment is my fault and not the meeting’s.

All in all I think the event was great. I think we need to have more, but I think if the audience is just told what is happening, nothing is going to get done. I could have gone online and seen what the city of Windsor is doing with the aquatic centre or the library. We need input from a variety of community members to make this city a better place.