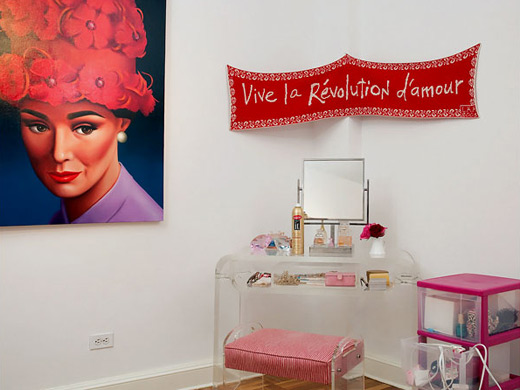 It seems as though this discussion crops up every now and again on our site here. We’ve written about alternative spaces before and we’re currently working out of a house on the edge of the University campus. I think that these spaces that can be multi-use, imagined to facilitate multiple activities, and multiple people provide the opportunity to do things that would be exciting and challenging in new ways.

It seems to me from this article in the NY Times, that these apartment galleries (one of them featuring work by Lisa Ann Auerbach is featured above) are possible because of the density of people willing to attend in a place like New York. So, how would this translate to a place like Windsor, with a painfully obvious lesser density? Well, thinking back to Steven’s post back in June, it makes me believe that indeed, spaces/venues like this would be exciting and workable, even with the somewhat limited density we face in the city.

The excitement around these spaces would surely be due to the way in which they could act differently than a normal gallery space does. It also helps to imagine ways of presenting artwork and creative research that isn’t faced with the same kinds of burdens that showing in a gallery space requires. And in some ways, I’m not even sure that it’s really a matter of space, but a matter of personnel, someone willing to commit a limited amount of time to organizing things.

Why aren’t there art crawls down the student rental-filled streets surrounding the University? Even curating work on a series of porches or front lawns? What if the idea of the Open Corridor festival was translated to a much smaller scale, focused on a single block at a time? Would it work?