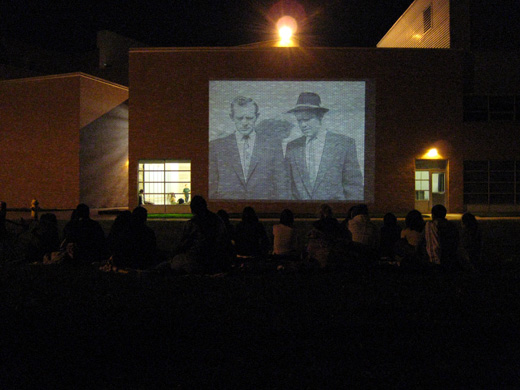 Night of the Living Broken City was awesome. It was cold, but there was a good group of people that came out and enjoyed the glory that is Teenagers From Outer Space. We collectively decided it was too cold to stay out for the second movie, NIght of the Living Dead (sorry if anyone came out later and missed us!!!).

We showed up around 6:30, knowing we had to get inside the Drama building, plug in our extension cord and prop the side door open. Michelle and Danielle ventured inside.

Our gear. The speakers we used were from a Dell computer I got back when I started university. The sound was a bit quiet, but I think it worked.

Setting up the projector, speakers, computer, trying to balance when to turn on the projector. There was a drama class going throughout the entire screening, we were a little concerned someone might pull the plug on us.

The moment of truth, turning on the projector and doing some tests.

It was still a little too light at 7pm. We tried to wait for it to get a little darker and for some more folks to show up.

Making some final adjustments to the projector. I think it was still a bit overblown by the time it got darker.

We shared some blankets as more people showed up… I was really happy with the turnout… but I think we’re going to have to wait until next spring or summer to try a long-duration outdoor screening. However, I am interested in getting a more mobile setup happening.