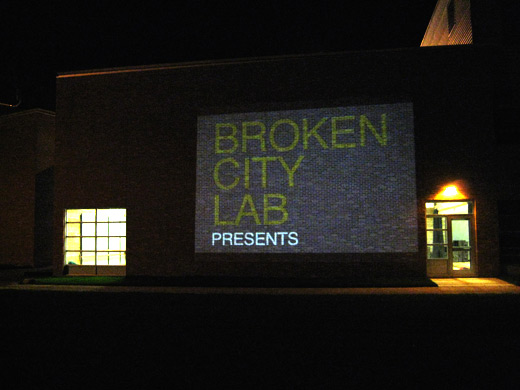 On Thursday night, on what was supposed to be a test run for projecting on the side of the Jackman Building (the new drama building at the University of Windsor), Broken City Lab ended up exploring a number of locations on campus armed with a projector, a laptop, and a really long extension cord. Originally, we just wanted make sure we could secure power from the building, that the image could look reasonable projected onto brick and that there wasn’t any undue alarm. In planning for our upcoming “Night of the Living Broken City” (more details coming soon here), we had moved the location of the screening to campus, but had no idea if the logistics would work.

Michelle and I went into the drama building with our two extension cords, while Josh and Immony started setting up the projector and laptop. We’ve decided on a better way to get power from the building, as there is apparently someone at the building to sign people in. The extension cords were just the right length to get a good sized image on the side of the building. The first thing we projected was our Stencil Demo video.

The second thing we watched was an episode from the original Transformers cartoon. I think we found a good balance in colour and contrast to combat the brick effects.

Projecting onto the side of Essex Hall looked really good, I think this might be a site we revisit later.

Connecting everything on the balcony of the CAW Centre.

We didn’t want to just project video from the balcony, so we opted for a TextEdit document. We shot onto this large pad of cement that connects a bunch of other sidewalks throughout the University in front of the CAW Centre.

We also typed out the lyrics to the Perfect Strangers theme song.

Then we moved down to that concrete passway that cuts through the middle of the library’s two buildings. It’s a good place, but tough to get the distance to get a large image. Some people from inside the library started watching.

My library of videos on my computer is limited, but the South Park episode, “Over Logging,” is always worth scanning through.

Packing up after a night’s work. I think next Thursday will be awesome, and I also think we found a lot of new research sites right on campus.