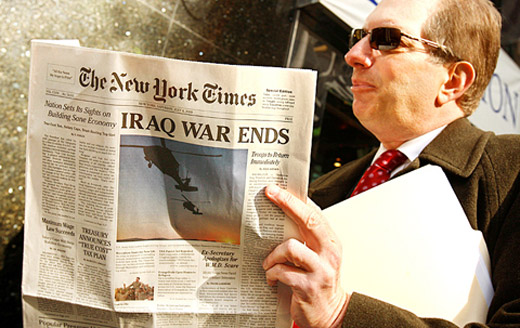 When I first saw this pop up on the interweb a couple days ago, I kind of dismissed it. I clearly hadn’t realized the scope of this project, and how exciting it really was. The fake New York Timespaper is dated July 4, 2009, and consists of numerous articles on a brighter future where big box stores are evicted, the focus is on building a sane economy, and a maximum wage law is passed in congress.

There were 1.2 million copies of the paper printed at 6 different printing presses then shipped out to thousands of volunteers who handed out the papers for free on the streets of New York and other cities across the US. Incredibly, the printing was financed through micro-donations from the web, not unlike those collected by Obama.

The spoof NY Times Website is well worth exploring, and the videos of the distribution are great. There’s also a blog post on the real NY Times that fill in some blanks on the background. The people behind the work include The Yes Men, Steve Lambert, and some NY Times employees.