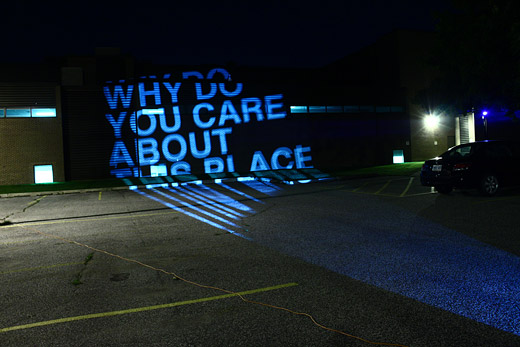 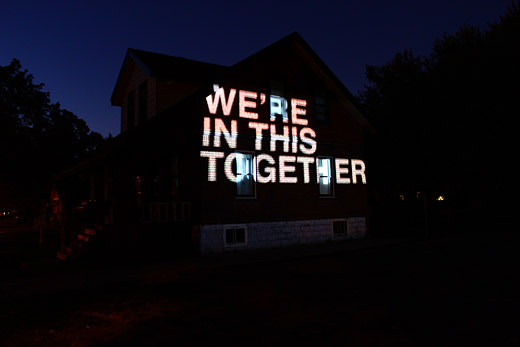 We met to do another round of projection tests, this time outside. While we still only had two projectors to work with for the test, we definitely verified an increase in brightness on outdoor surfaces (both with ambient light and without), though this increase is not equal to the amount of light we’re throwing at it—that is, shining two projectors with the same images at the same point does not double the brightness. 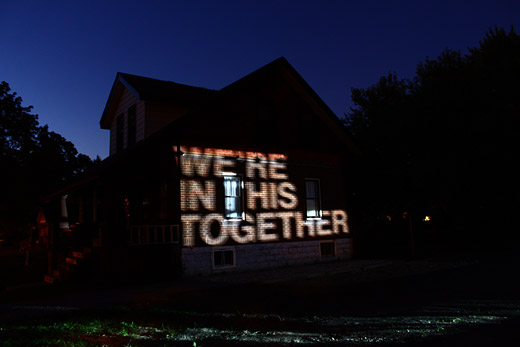 These photographs have an approximately one second exposure, but the difference between one and two projectors will be helpful. For all of these tests we were working the projectors by holding them up by hand and attempting to cooperate to line them up. 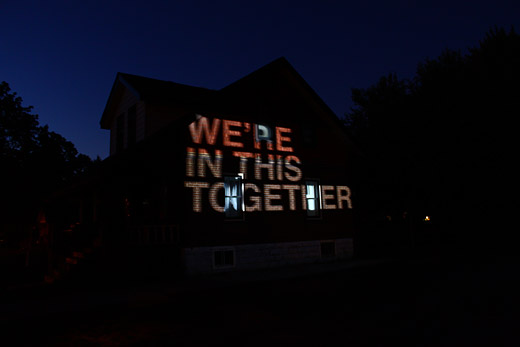 This photograph is with just one projector. 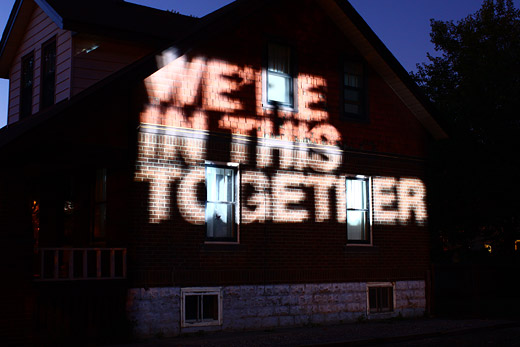 With two projectors (and a longer exposure time), the problem with using two projectors becomes very evident—lining up the images. So, while we agreed that we need to test three projectors, we also need to figure out a kind of rig that we could easily build to allow us to line up multiple projectors, while having them all tethered together to decrease the movement. 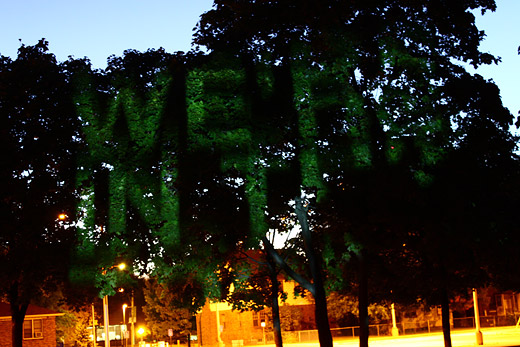 Projecting onto trees looks great from the right angle, but due to the depth changes of the branches and leaves, it’s really only visible from the same angle as the projection. 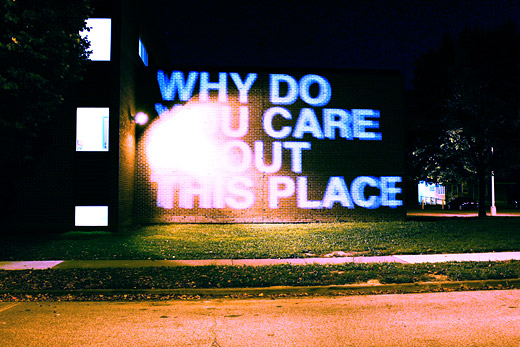 After testing on a side of a dark house, we moved across the street to test on a wall with a lot of ambient light. 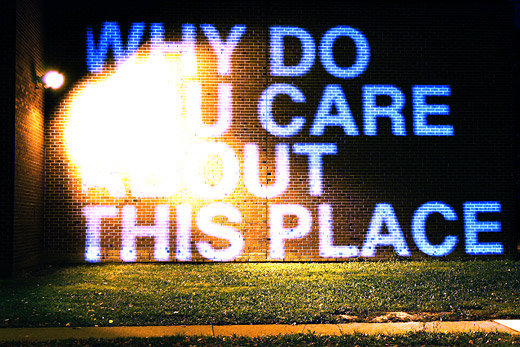 We would never be able to work with a wall that has a light shining right onto it, but testing this way does help us to understand the tolerance of the image’s legibility next to ambient light. 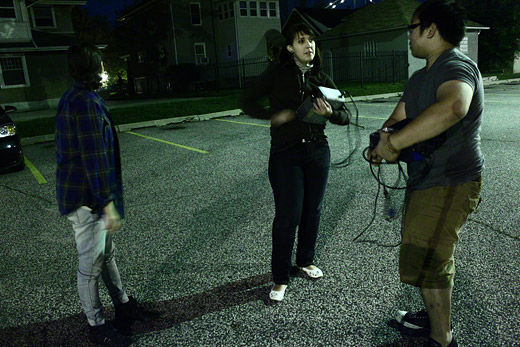 We moved further into the parking lot to allow us some more distance from the wall and to project onto a dark wall. Danielle, Michelle, and Mike sorted out the cables between projectors and the computer along with our 100′ extension cord. 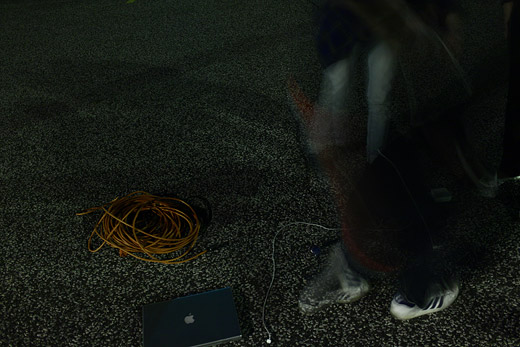 Setup is always a bit of tough when trying to get power from an unknown source. 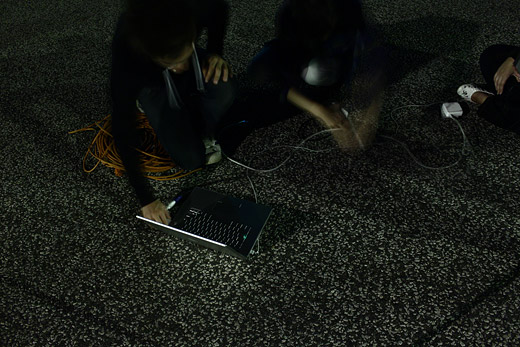 In this case, we grabbed power from an outdoor outlet, but we had to test a number of them before finding a working one. 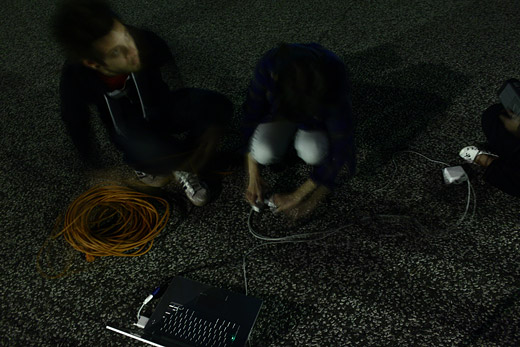 We also started discussing the best way to continue with tests on a dark brick wall with less ambient light. 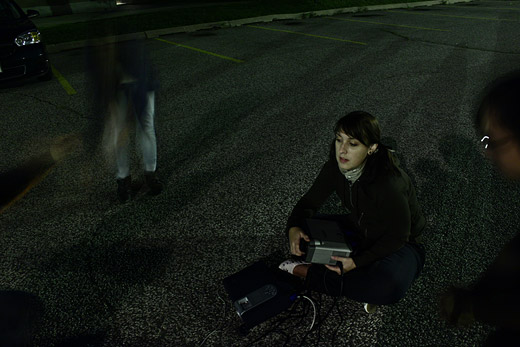 We again started to discuss some kind of rig we could build to make the projections line up much easier.

One projection onto the wall turned out pretty well, but this wall is likely darker than the one we’re actually looking at using. 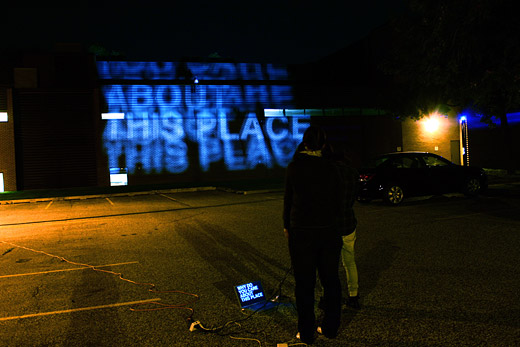 Michelle and Danielle work with two projectors; a one second exposures really highlight the need for a rig. 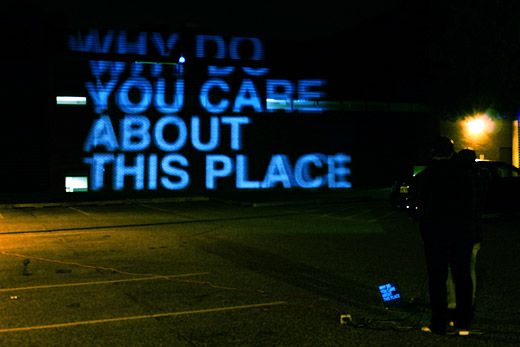 With two projections, I went back at least 400 meters and the image was still easily visible (and at that distance, the movement between images is less noticeable). 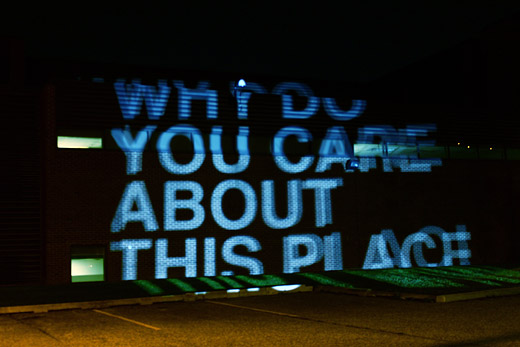 Our next tests will have to be with a third projector and a rough mockup of a rig to hold them all in place. 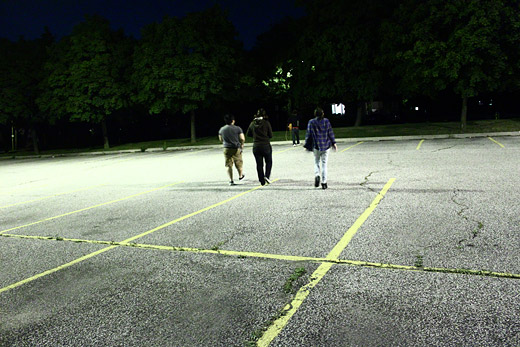 We headed back to HQ to finish preparing for Monday’s algorithmic walk. 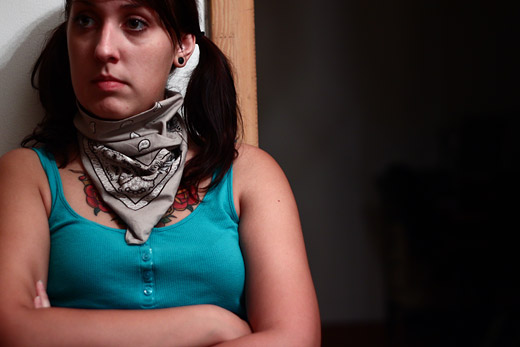 Back inside, we started to talk about some of the logistics of the walk, along with making a to-do list that we need to get through by Monday afternoon. 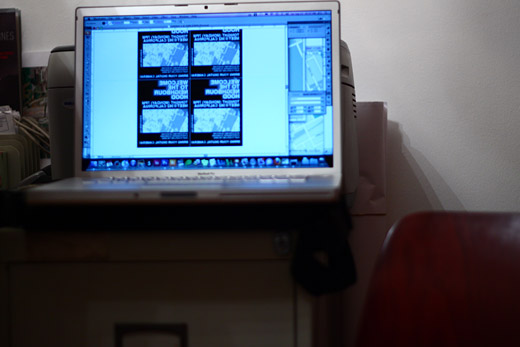 Cristina, Michelle, and I worked on the flyers that we’ll be handing out first thing Monday. We were going to print on paper, but then remembered the huge piles of mylar we have (thanks to Mike). Given the abuse that the paper that the algorithms were printed on went through the last time we tried an activity like this, we figured printing out the algorithms and the flyers on something a bit more durable (and interesting) would be a good choice. 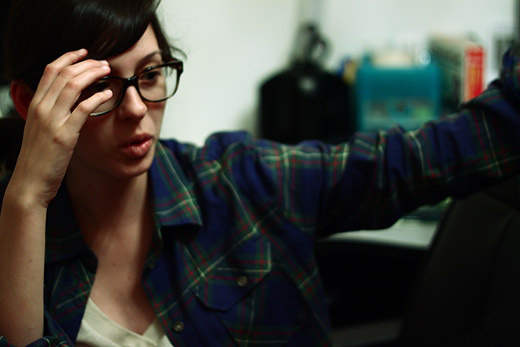 Meanwhile, Danielle and Mike work on getting a set of steps for our algorithm ready. 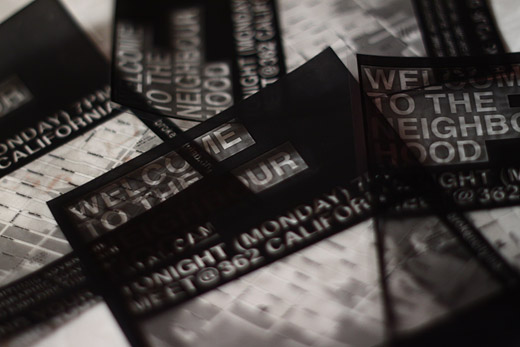 Here are some of the flyers on clear mylar. 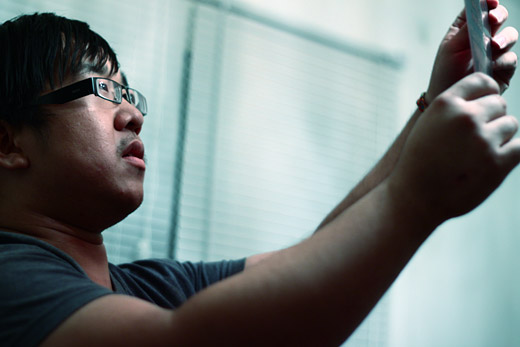 We eventually decided on printing on the matte side of the mylar, but in reverse so that it’s legible from the glossy side. It took some experimentation to get the flyers legible. 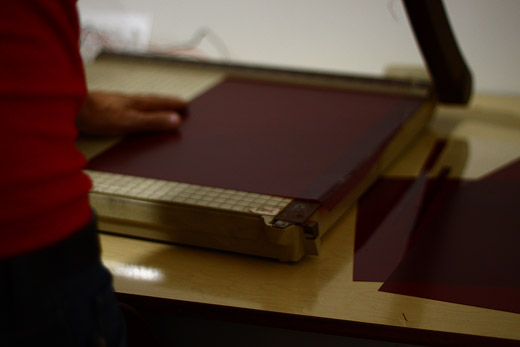 The mylar we had was quite large, so we had to cut it down. 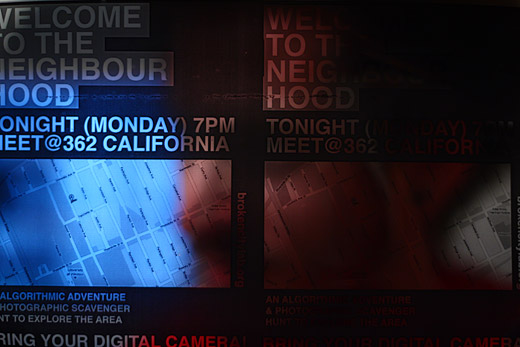 The flyers are most legible when held up to a light source. 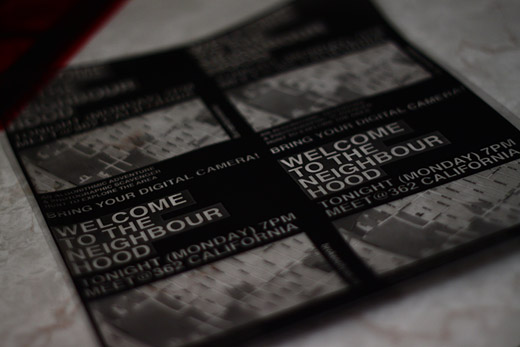 We ended up printing most of the flyers on red mylar, but we’ll print the algorithms on clear mylar to make it easier to read. 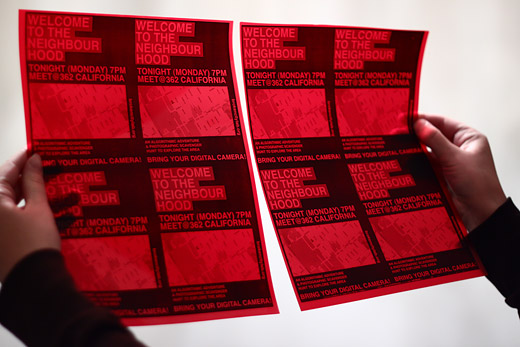 Here’s the final flyers that we’ll cut down and pass out on Monday morning to remind folks to come out.