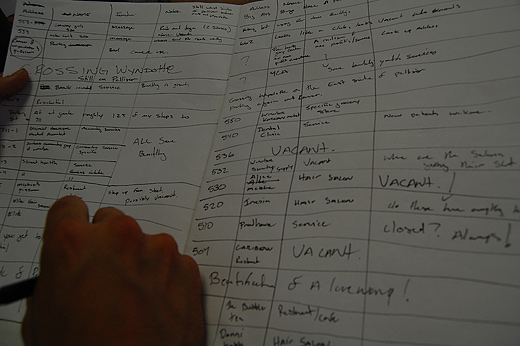 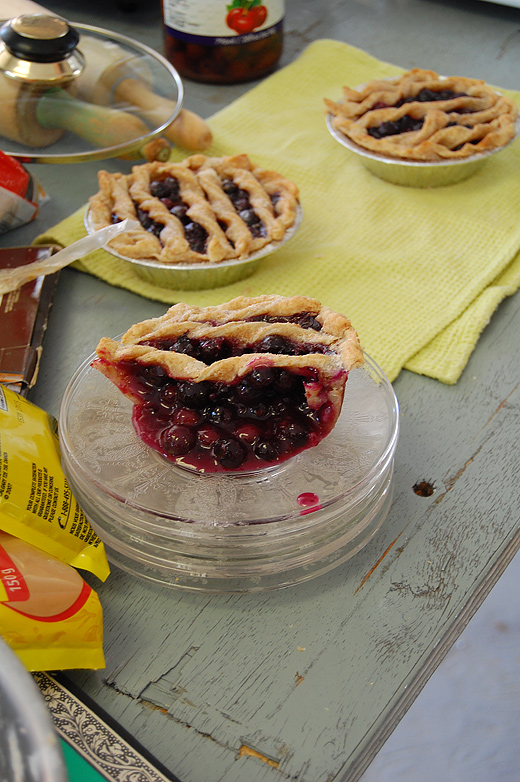 We had a lot of changes happen this weekend down on Pelissier Street. Eric Cheung’s Interior sod was uninstalled Saturday, Leesa Bringas’ Indian Road Postcard project launched, and Merry Ellen Scully Mosna’s pie-making was a big hit on Sunday. 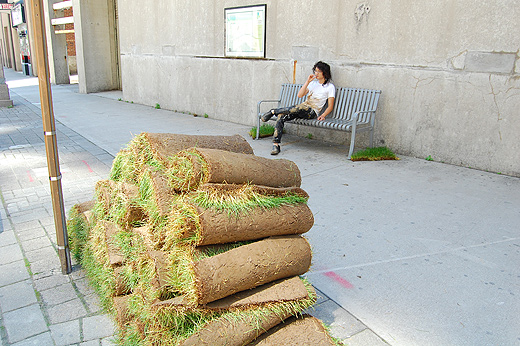 Eric’s sod was picked up Saturday afternoon. He placed an ad on Kijiji for free sod, and an excited and eager couple picked it up for their backyard. We are glad to see that the sod went to a good home, and that it will be used and enjoyed. 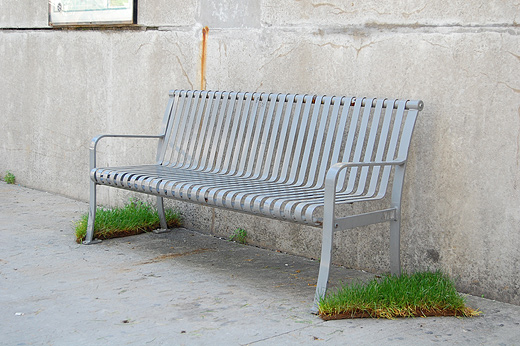 Only two pieces of sod remain at Park and Pelissier. Eric cut triangle shapes to place on either side of this bench. 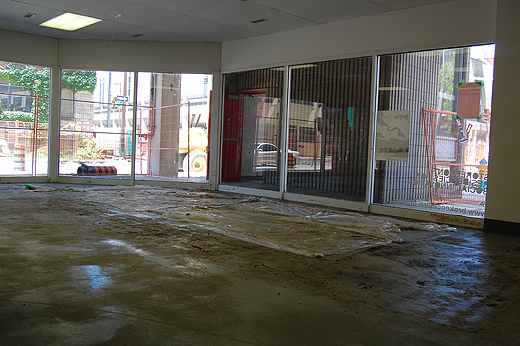 The concrete floor took a while to clean up, having to be mopped a few times and then swept up the next morning. 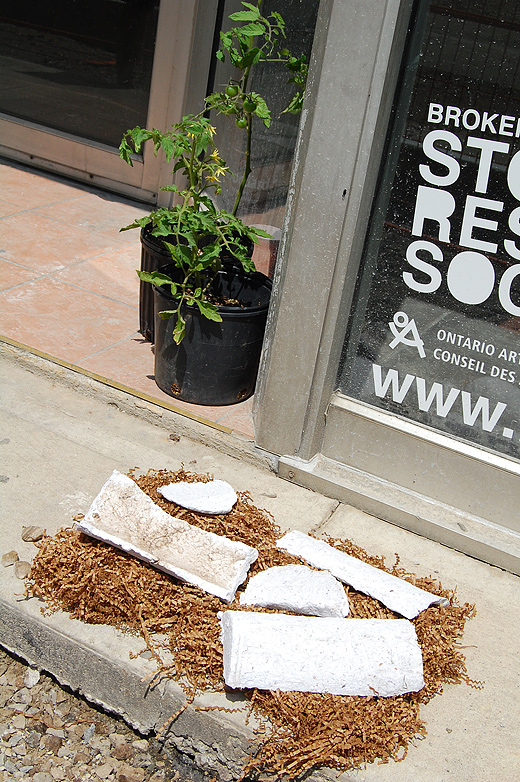 As part of Julie Rene de Cotret’s Fabulations de Windsor in 424 Pelissier, she made firewood out of paper by using a plaster mould. Saturday’s sunshine was put to good use in drying the homemade paper outside of the store. 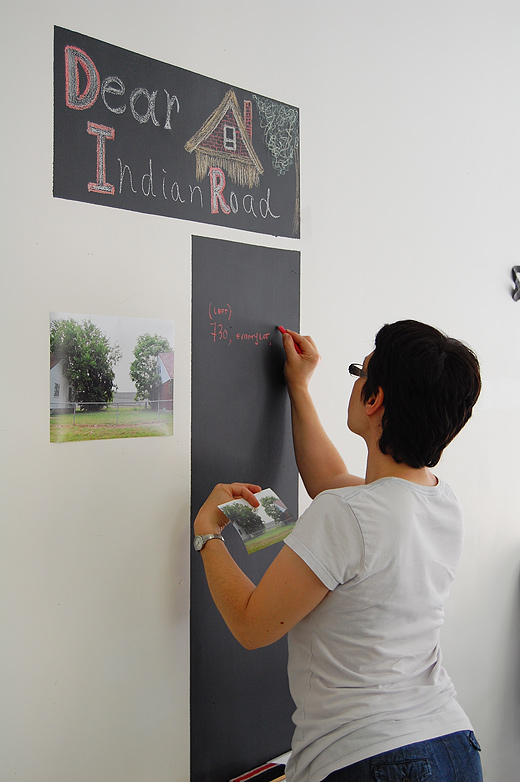 Leesa spend Saturday setting up her postcard stations in 406 and 410. 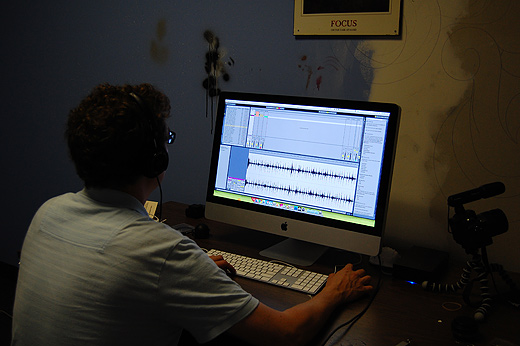 Daragh edited away in his office all day, also catching up on his logging of footage since he will be away during the week, returning this Saturday. 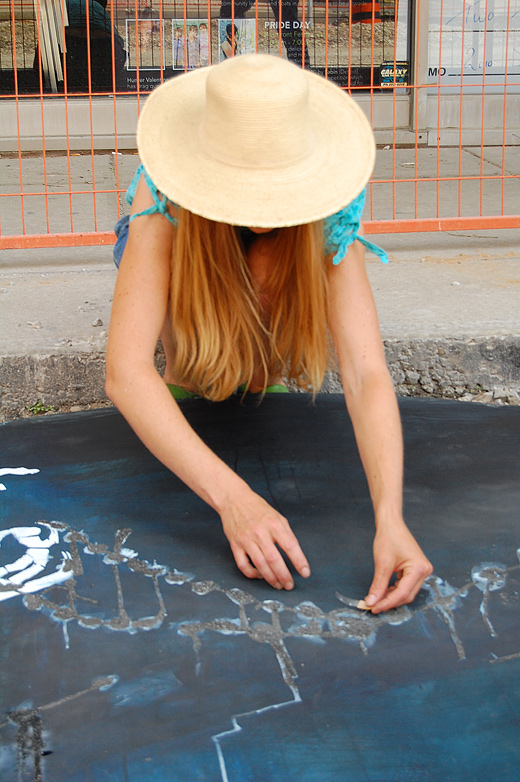 On Sunday morning, Julie set off a fireworks drawing out on the street, as there was no construction. 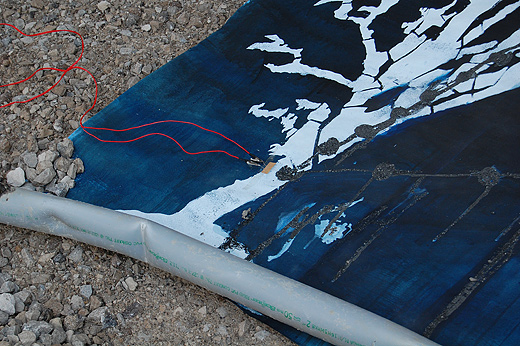 She used a battery powered detonator to set off a small explosion to the gunpowder, creating a burned effect on the paper. 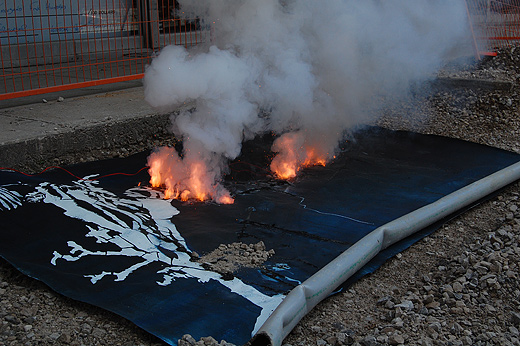 Because of the wind, the explosion caused more flames than we had assumed. Julie used the rocks left from the construction to stop the flames and prevent the burnt holes from growing too large. 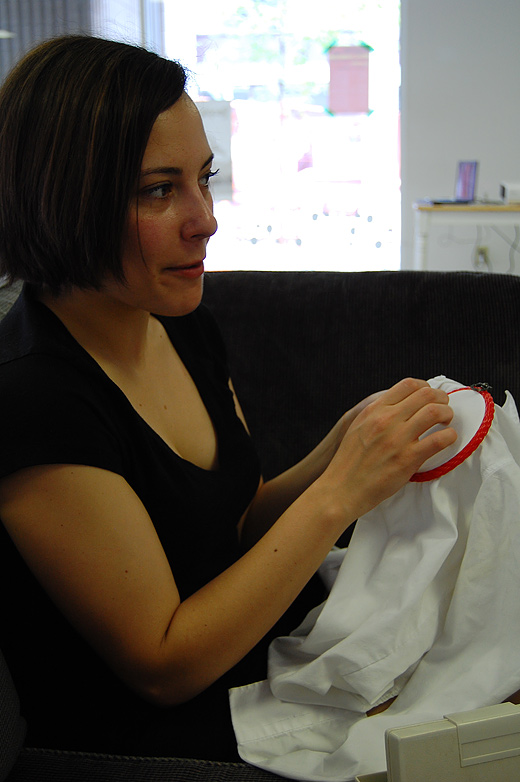 We didn’t see Norman on Saturday, but Sara joined us to do some embroidery on Norman’s Lapel. 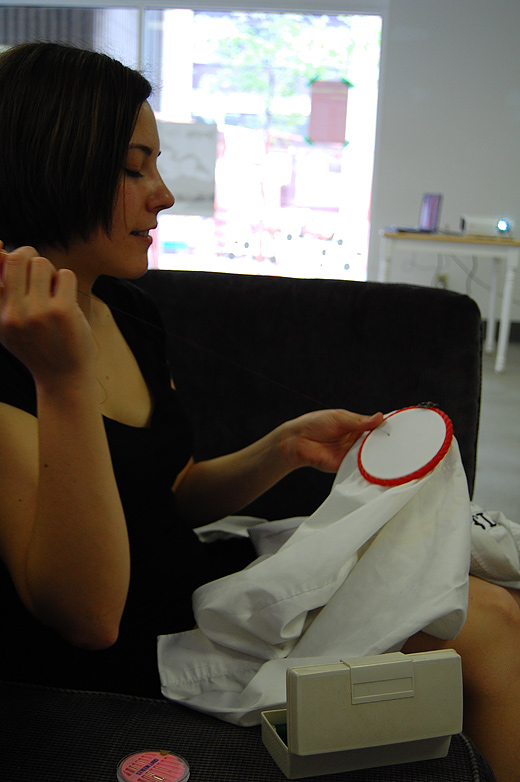 The precision in detail in the embroidery is amazing. I don’t think I have enough patience for this type of thing. 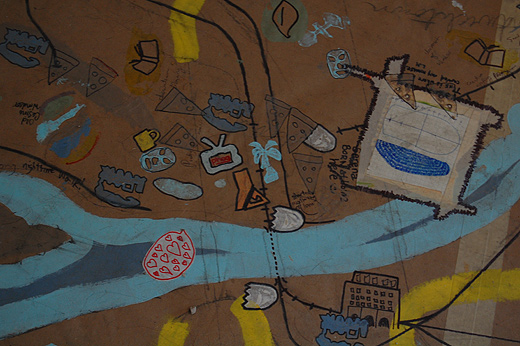 The People’s Museum’s map, in particular the downtown core, is looking AWESOME! 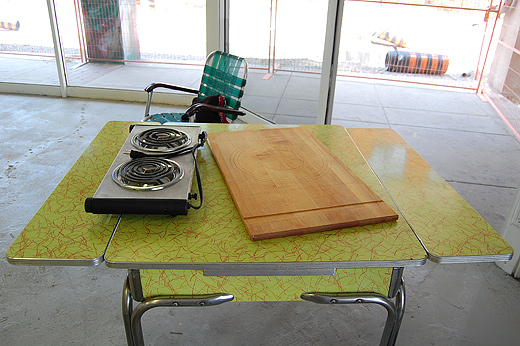 Merry Ellen started her Portraits and Pies Sundays, bringing all the equipment to make pies in 406 Pelissier. This table is so great. Beautiful for photos, not to mention rolling dough! 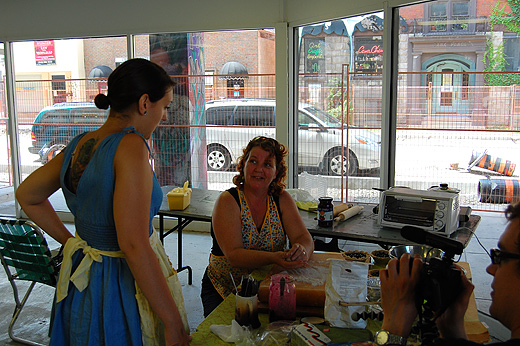 I got right in there with my apron and helped with the blueberry pies. I was so excited to get my hands all full of flour! 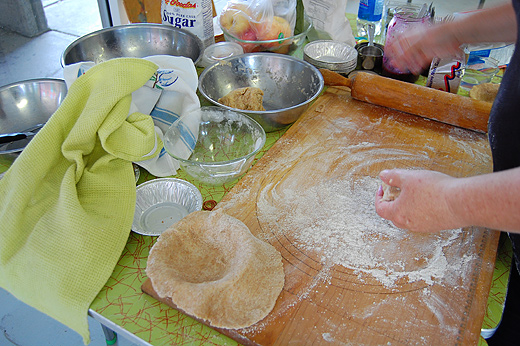 We made 4″ personal pies instead of full-size ones to cut down on baking time and to make it easier to transport. 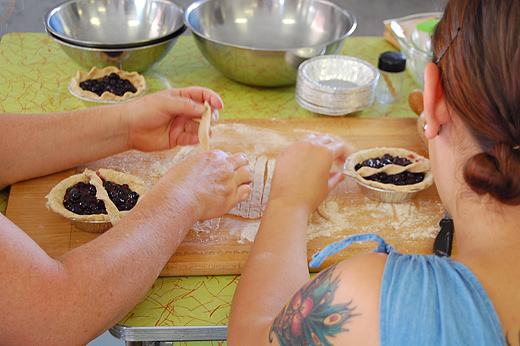 Merry Ellen showed me her unique crust technique, which consisted of cutting vertical strips of pie crust, twisting them then squishing the corners down. 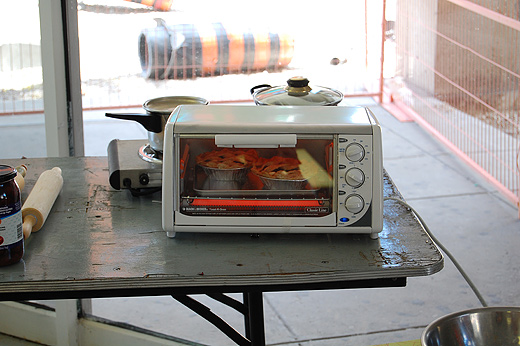 The pies were baked in a small toasted oven, only two pies could fit at a time. When Merry Ellen first plugged in the oven, it started to smoke a little bit and smell funny. We were scared that it would burst into flames, but we gave it a few minutes to let whatever it was burn off before we put the pies in to bake. 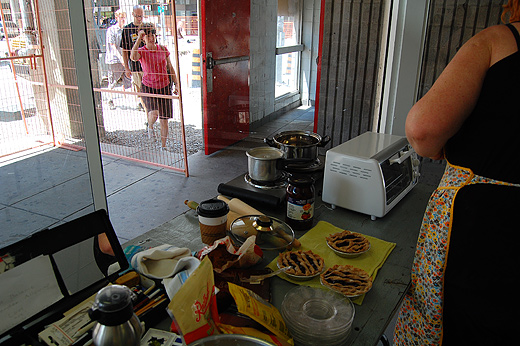 Lee Rodney, whose Border Bookmobile will be part of SRSI later on, came by with a few friends to check out the spaces. On Friday June 25, she will be conducting a field trip of Windsor’s lost and forgotten suburbs, ruins left from overzealous property developers from the 1920s to the present. Contact correspondence@borderbookmobile.net to book your seat on the tour. 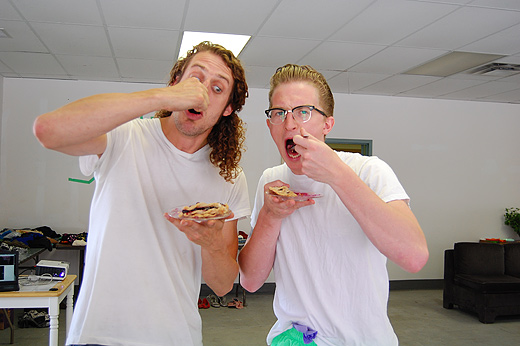 The blueberry pies were the first to come out of the oven and were thoroughly enjoyed by everyone. It was the best blueberry pie ever, so tasty! 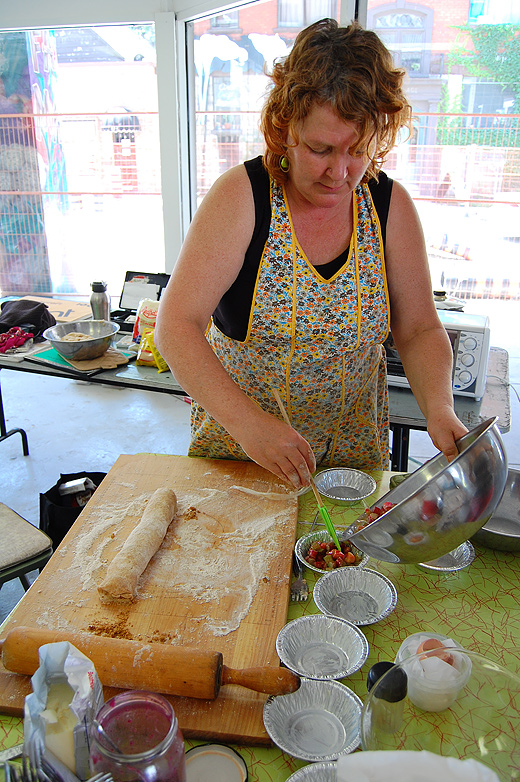 Next was rhubarb flips. The crust for these is somewhat unconventional. It’s rolled with spices and brown sugar and then sliced on top of the rhubarb in the pie dishes. These are what the French Canadians would call “petes de soeurs”. 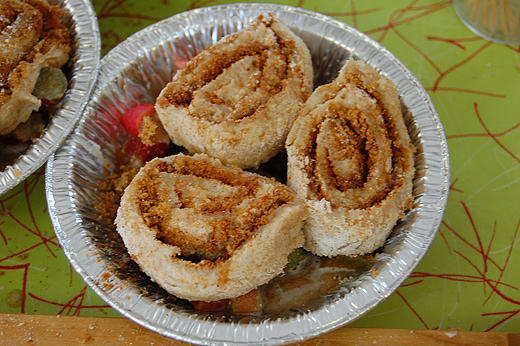 These were equally as tasty as the blueberry pies! I enjoyed the bitter rhubarb with the spicy crust pinwheels on top. Merry Ellen also made apple pies for people to take home with them. She will be back next Sunday with more tasty treats. She will also be drawing portraits in-studio during this time as well. 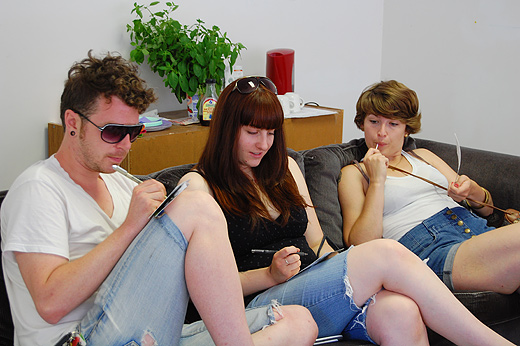 Chris Lamb, Erin Rhea and Tokio Webster stopped in to contribute to Leesa’s project by writing postcards to vacant houses on Indian Road. 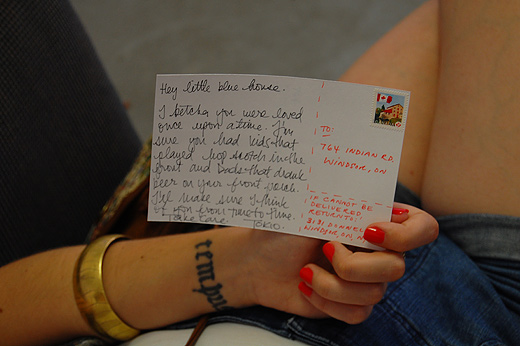 The idea of personifying the houses through text reminds me a lot of how BCL views the city of Windsor, especially the billboards that conclude our Save The City project. 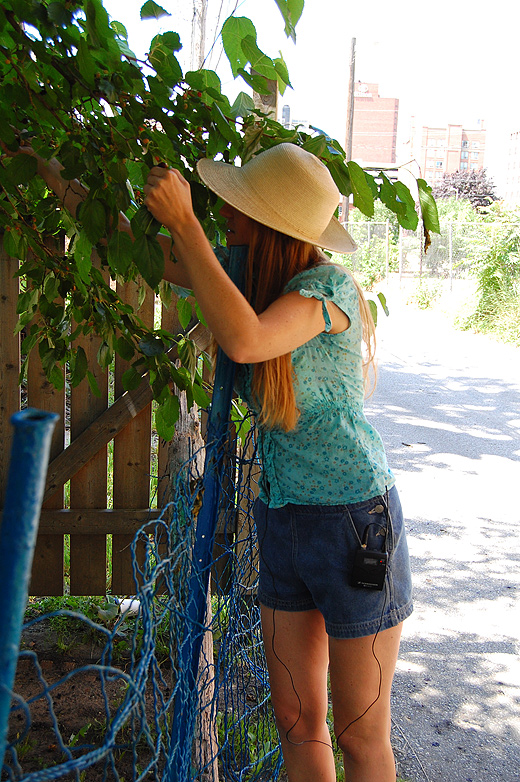 Daragh filmed a conversation between Julie and I in the alley one block over, where we found two mulberry trees and picked a few to bring back to the stores. We talked about her perception of Windsor and the art she is making for the residency. 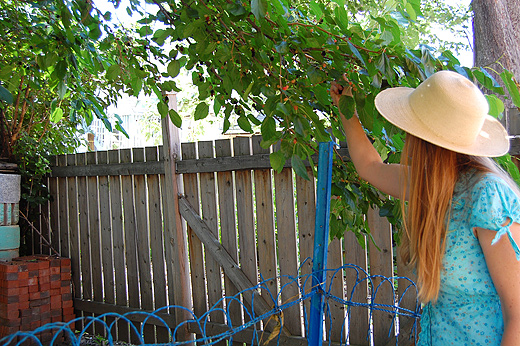 Mulberry trees are quite common in the alleys of both downtown and west Windsor. They are ripe right now and will be more all of July too! Perfect for harvest! 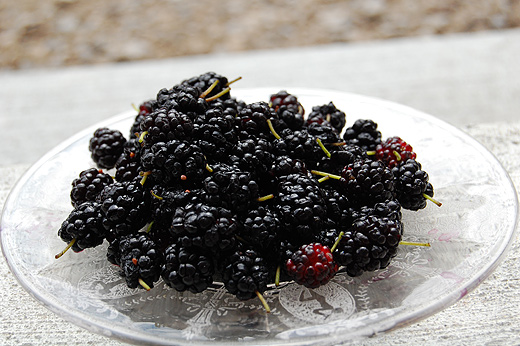 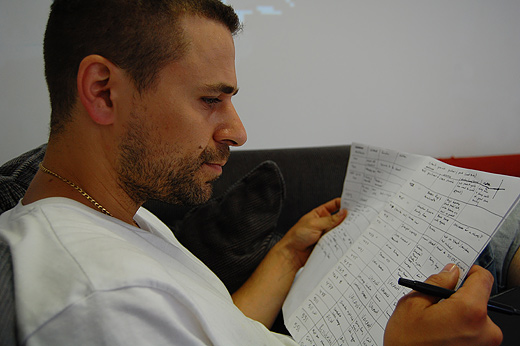 Eagerly awaiting his partner Simon’s return, Chris did some field research, walking up and down Pelissier Street, taking note of all the businesses and placing them in a chart.

We sat down together at the end of the day and went through some questions he had about certain addresses he wasn’t sure about. Chris and Simon, The Department of Unusual Certainties, are cooking up some good stuff over in 410, and I finally figured out how to take photos in their space due to lighting issues and lack of camera experience on my part. More to come on them in the next post!