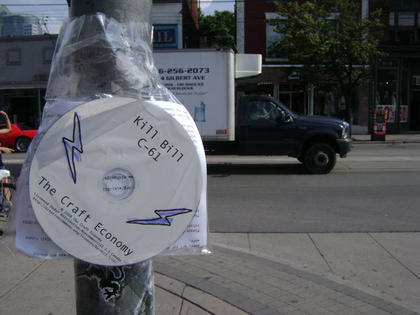 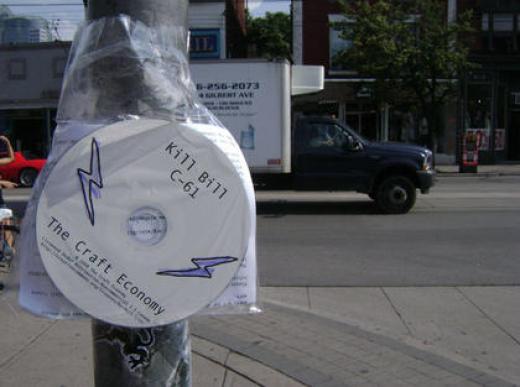 You’re probably wondering what’s going on in this picture. The band The Craft Economy has hit the streets with their own protest agaisnt bill C-61. From Boing Boing:

The disc, containing a demo of “Menergy,” a track off of the band’s upcoming record (due late August) isn’t simply Creative Commons licensed music like their previous hydro pole-only release, this time it’s a Bill C-61 protest too (see that little piece of paper sticking out of the back of the disc? Yeah, that’s the protest part). It reads, in part: This is far and beyond and more bizarre than the heavily criticized DMCA in the USA. Copyright should protect the rights of artists and producers of creative content, but it should not suppress creative and artistic expression. The Craft Economy has licensed our music, including this CD, using the Creative Commons Attribution-Noncommercial 2.5 license. This license gives you the freedom to share our music with your friends and enemies, and remix and use it in new and creative ways, provided you attribute the work back to us, and you don’t make money off our work. It’s fair for you and us. This is the way art should work.)

Totally intense. For more information on what Bill C- 61 click here. No seriously, C-61 is super ridiculous and way harder than the American version. Another reason to silence corporate lobbyists FROM ANOTHER COUNTRY WTF.

Actually, I was talking to a friend who was reading the article in depth and said that the majority government was looking at it with shifty eyes. I hope they see what we see.