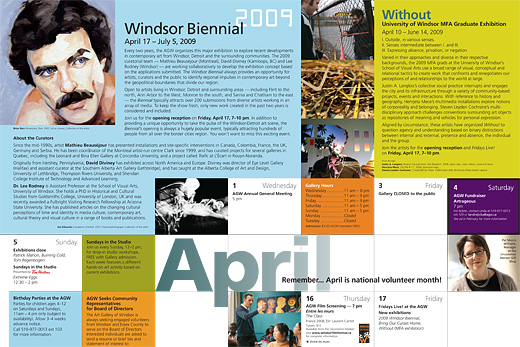 There’s an opening for two shows in which I’m participating on Friday, April 17, 2009, 7pm at the Art Gallery of Windsor.

On the first floor is the University of Windsor MFA Graduate Exhibition, Without, featuring documentation from various Broken City Lab projects alongside work by Steven Leyden Cochrane, and Henrjeta Mece, and on the second floor is the 2009 Windsor Biennial, with a large-scale graph outlining ideas and activities for re-imagining cross-border relations alongside too many other great area artists to name. As part of the Biennial, Broken City Lab will be working in Windsor and Detroit towards the realization of some of these activities throughout May and June (more details to follow).