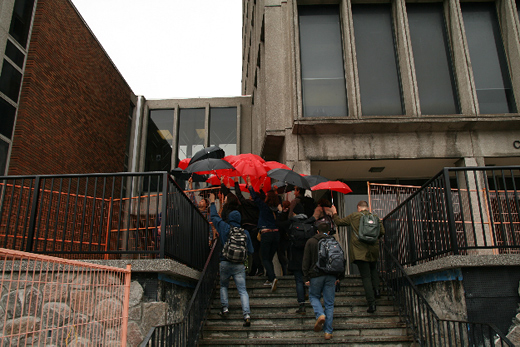 The report for Day 4 of our Homework Residency has arrived with photos and notes from the residents themselves. Be sure to check out more on our Artists-in-Residence.

This post marks the final instalment of documentation from our residency — at least in this form. There’s more ahead that you can anticipate from the Homework publication, videos of the conference presentations, and somehow, more. We’d like to again sincerely thank everyone who made Homework possible and for all the artists in residence for participating. Now without further adieu, here’s some reflections on the final day of the residency, which would be followed by Day 1 of our conference.

Rodrigo and Laura prepared some notes about the fourth day of the Homework Residency. Here they are in a slightly expanded form with some photos. This account does not capture each person’s contribution. I think this is a shame because with out a doubt each person’s presence, actions, expressed, and unexpressed thoughts tangibly shaped the character of the experience. Maybe the first attempt at documenting an experience only has to provide a loose chronology that others can debate and refine…

The group coalesced at Lebel gallery around 9am for a breakfast of toast and hard boiled eggs provided by the beautiful Boot. Rod Strickland and three of his sculpture students sat in our debrief with Justin. The group gave a sleepy recap of the last few days while we ate. Our decision making process on day four was chance. We talked about it for fucking ever. We were stuck on the nuts and bolts of how we would use it. The first question we put to chance was whether we would continue with the umbrellas project- we flipped a coin and the and the ‘no’ side landed up. There seemed to be some disappointment in the room. Someone said “starting to think 19 people just can’t work together”. Another threw back – “that’s hurtful”. It was a weird exchange that maybe related to the earlier conversation about whether we were using our chosen decision making models with integrity – a concern that was expressed earlier in the conversation. We still didn’t really know how to work with chance but we knew we need to move forward. We all wrote an action, idea, or a place on a piece of paper and put it in a hat. Rodrigo drew three options… he pulled something out but people weren’t happy, so he pulled another thing out, and then another. 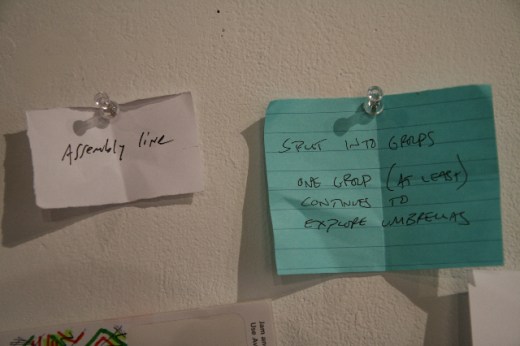 (Two of the three options selected from the hat- ‘assembly line’ refers to a suggestion Jack had brought up earlier about exploring what 19 people could create through a kind of serial or mass production) Rodrigo and Laura’s note use the term ‘Things got weird’… I don’t disagree, I would suggest that our first two experiences of chance maybe changed the role of conversation in the group- I don’t know if others would describe it in this way but I felt a kind of loss of agency. We didn’t know what to do with the options we pulled from the hat- in the end we left them and continued with the umbrellas. 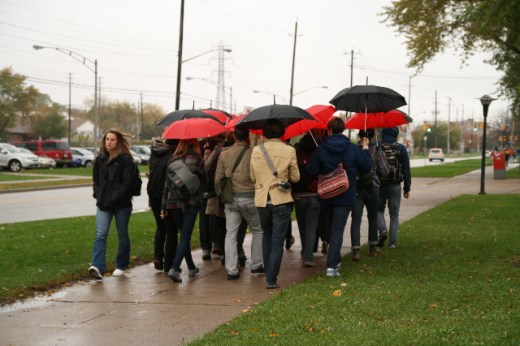 Leaving Lebel we crossed Huron Church and walked along College. We met a women named Patricia in front of the sports centre. She needed to go to the library so it was suggested she take the lead position in the canopy and the group would escort her. Others were offered ‘rides’ too- There were no takers. We occupied the whole sidewalk. At first we just blocked oncoming traffic. 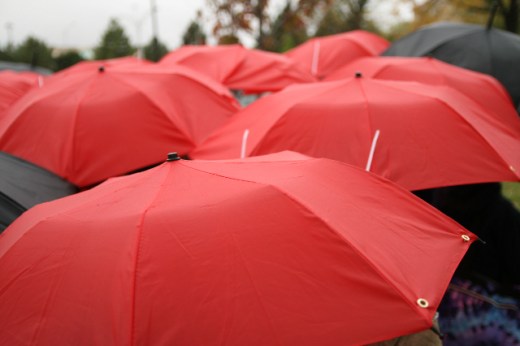 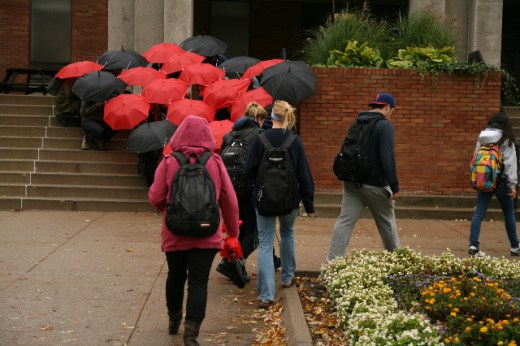 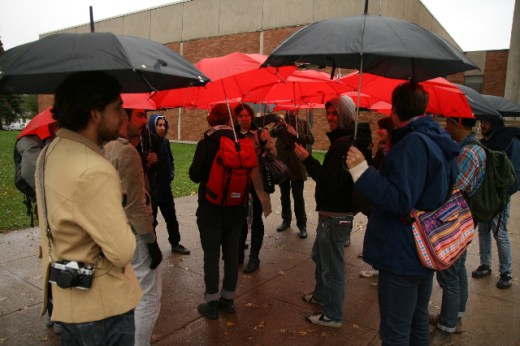 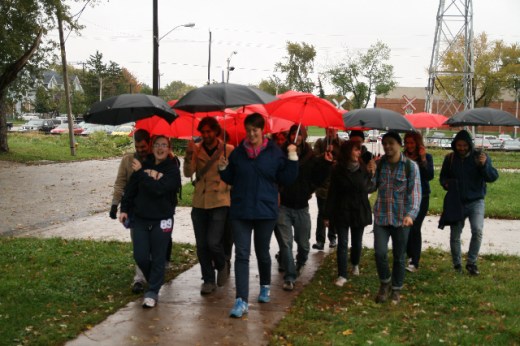 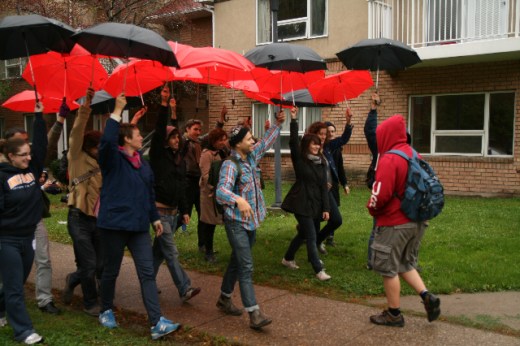 Eventually a more sympathetic response emerged and the group started transforming the canopy into an arcade for oncoming pedestrians. 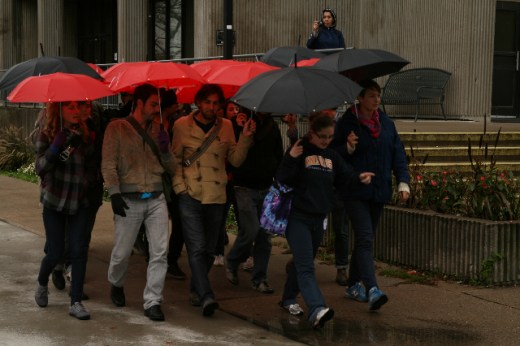 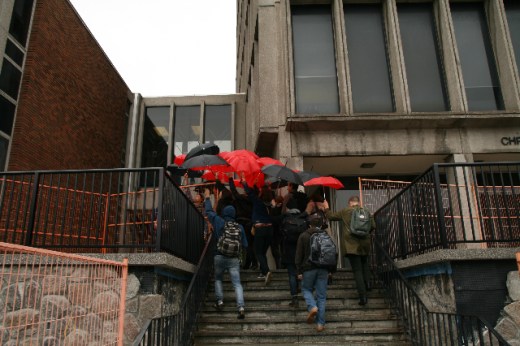 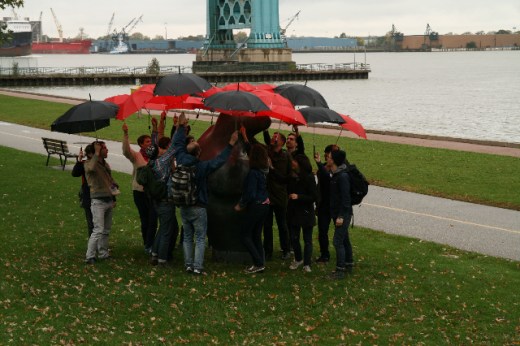 After delivering Patricia to her destination we went on to the Odette Sculpture park. Our umbrellas, a sculpture in their own right, offered an interesting contrast to the heaviness and permanence of the works in the park. The group approached one work gave it temporary relief from the elements. We kept walking, eventually deciding to fold the umbrellas and take lunch. 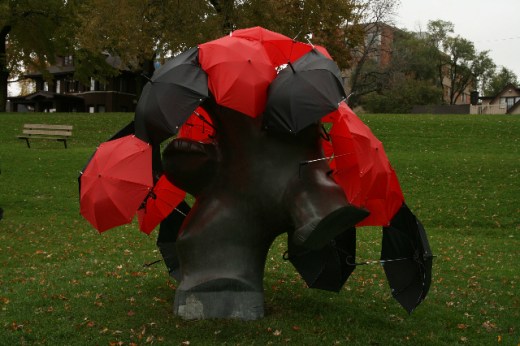 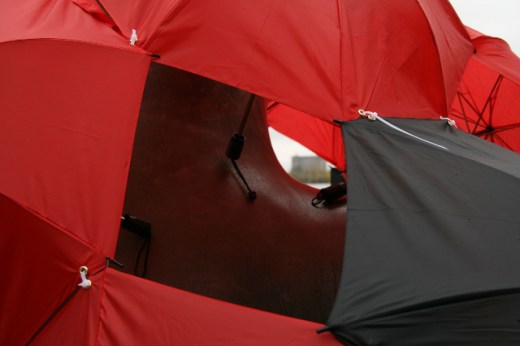 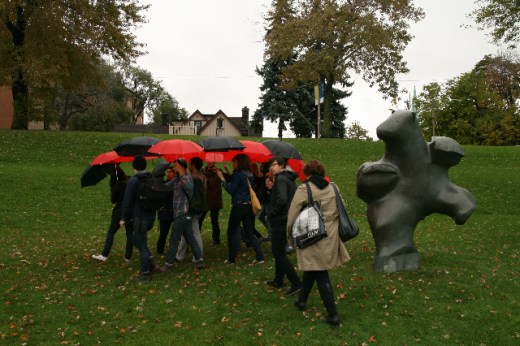 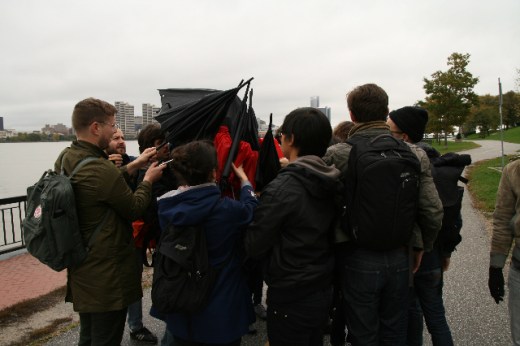 After lunch we met at the bus shelter, then moved to parking lot beside the parkade we used on our second day. Tried different configurations including the canopy moving and fitting into different spaces within the parking lot, breaking into small units of 3 or 4 umbrellas, reconfiguring into single group again, the simple goal of documenting the umbrellas from the roof of the garage was met the groups energy transformed into just trying other things i.e. forming a barricade, fitting into a phone booth, and taking to the roofs again.

It had the a certain character of revisiting either earlier experiments or individuals own work. The moment had been worked through. 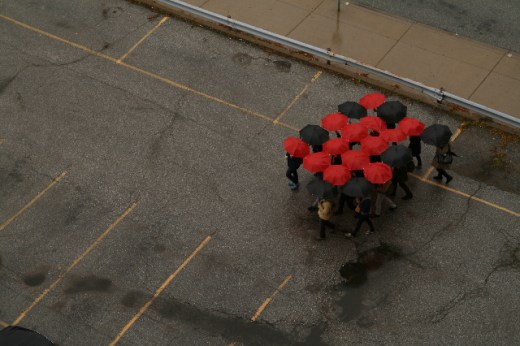 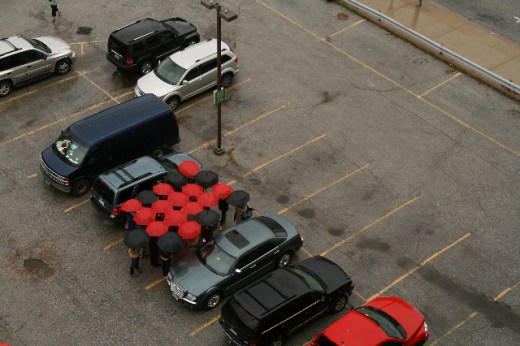 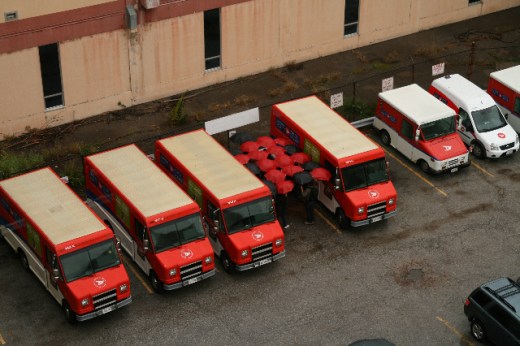 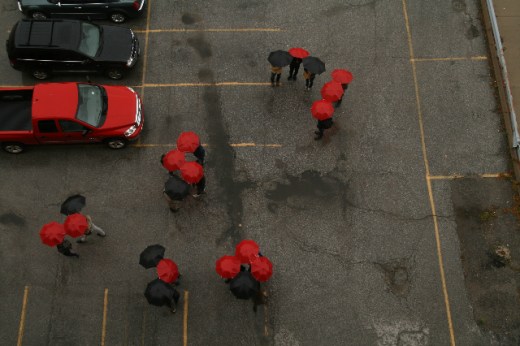 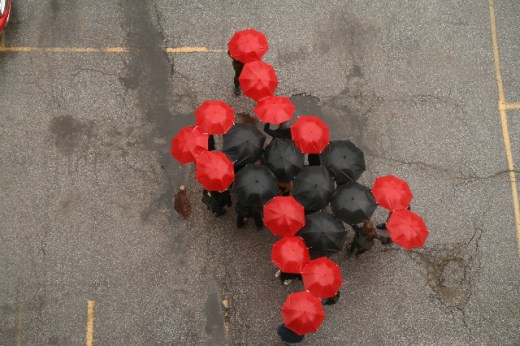 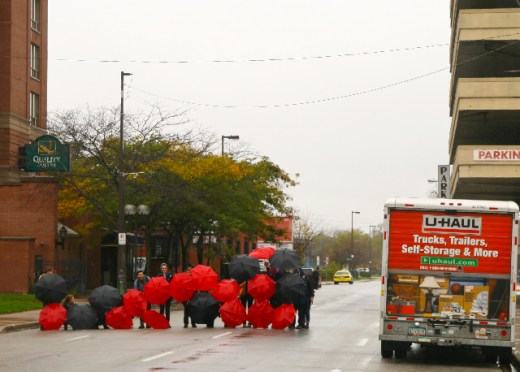 The group splintered, each making their own way back to Lebel, a few smaller drawing, writing, and construction projects were undertaken. Then we talked about the publication, led by Chloe and Brennan and took a moment to try to reflect on the experience and produce drawings and notes. Jack started circulating question sheets that later offered the logic of our final presentation. The day ended with whiskey and karaoke – it was a good ‘group building’ moment where we obviously felt comfortable with each other.