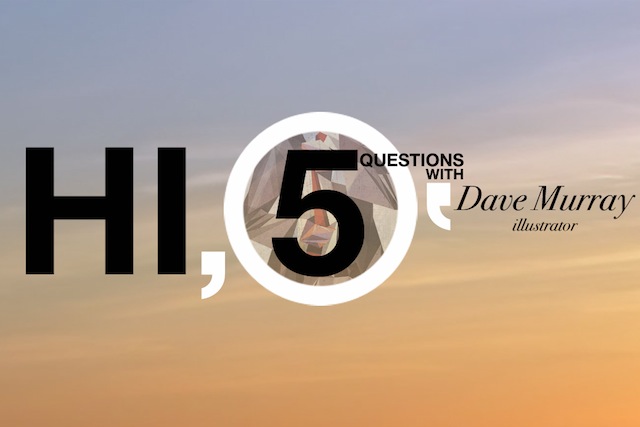 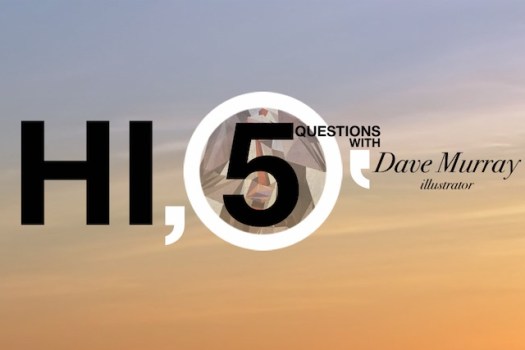 Sara Howie and I are excited to begin a new web-only interview project called Hi, 5 (5 Questions). The project will act as an educational device which will allow us to gain insight into the narratives that define successful individuals. We are interested in the motivations behind ambitious ideas and how change has been affected by those with the passion for progress. I decided to interview Dave because, once I heard about him, I was interested in how he worked the imagery and culture of Toronto, Ontario into his work.

Dave Murray is an illustrator and designer, currently based in Toronto, Canada.

Graduating in 2009 with a BAA Illustration from Sheridan College, Dave has continued to push himself to explore new visual frontiers to express both his own and client’s visions. Dave’s work has evolved to reflect his myriad interests; be it the strict design of his Toronto neighbourhood mapping series, or his futuristic cubist takes on portraits and pop culture.

Dave’s work has been featured in The Toronto Star, The Globe and Mail, The National Post, Canadian House and Home, Benjamin Moore, and 3 x 3 Magazine, as well as countless blogs.

Ha ha, the first thing would probably be that I no longer have shoulder length hair.  I’d probably describe myself as a pretty logical evolution of where I was – everything is mostly the same, just more refined.

My work is constantly evolving – but I think the biggest step in the past few years has been the result of really exploring new ways of working that I otherwise wouldn’t usually do.  I’ve really re-kindled my love of drawing, and am more into the history of art and image making.  All of this expansion not only provides me with ways to creatively blow off some steam, but it also informs my more focused pieces.

This one’s actually tricky for me to answer.  I like to think of myself as a passive observer – I don’t always immediately act on things, nor do I always respond to advice or new ways of thinking.  Maybe I’m missing out on a lot, I don’t know.

Again, this is one of those things that I try not to let creep into my art.  My politics are probably best defined by the some of the projects I take on – Dandyhorse Magazine is a great example.  I’ve done a few pieces for them, and I love that I’ve had the chance to work with them because I love bicycles, and I love cycling in Toronto.  This isn’t my favourite thing to admit, but trying to live as a freelance illustrator means that I’ll be more likely to take jobs from places that I might not necessarily support because it’ll pay the bills – the best part of those jobs, though, is making them fun for myself.

I feel like a city should, more than anything else, be an accessible home for everyone who wants to live there.  Mass transit, good infrastructure, reliable services and culture are all things that a city should prioritize and constantly strive to improve.  Toronto, right now, is an example of how not to prioritize these things, and it’s sad.  Our mayor and his cronies are doing a sub-par job (putting it lightly).  What I fear most though, is not that something bad will happen – but that NOTHING will happen.  I’m pretty sure that at the end of Ford’s run, we’re going to be exactly where we were 4 years previous.