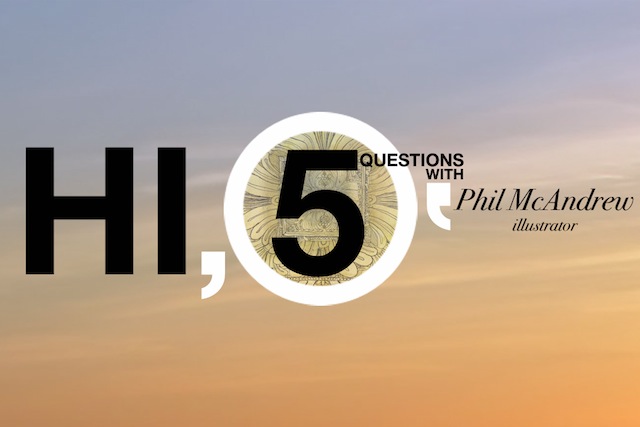 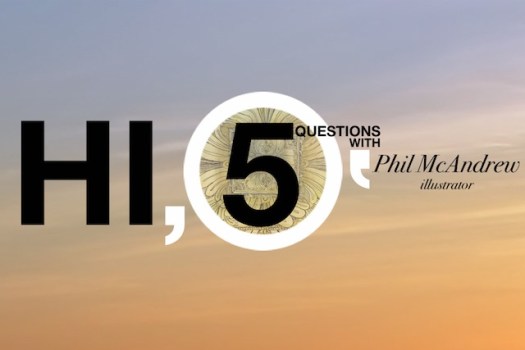 Today we interview Phil McAndrew. Phil creates intriguing and original content, and has worked for a large and diverse client base. He also has the benefit of being extremely hilarious and we were quite pleased when he emailed us back with some great answers.

I’d describe myself to 16-year-old Phil as someone who gets to sit at home and draw pictures and eat candy all day. That was pretty much my goal as a 16 year old if I remember correctly, though at the time I don’t think I was actually convinced that it was really possible (or at least that I’d personally ever be able to get to that point).

My work and way of thinking has definitely shifted more and more towards “just have fun, be a nice guy and be honest with yourself” and away from trying to impress people. I mean, I’ve always tried to keep those things in mind but I’ve definitely learned first hand exactly how important it is to simply have fun and to be awesome, both to yourself and to others (hint: it’s very important). If you’re really allowing yourself to have fun, it’ll show through in the quality of your work and improve your life.

So many people! I don’t think I could list them all if I tried. I think every single person I meet expands my view of the world, bit by bit. My way of thinking has been informed by various teachers all through my life, both the good ones and the bad ones. My parents and grandparents. My brothers and my friends. Jim Henson.

I don’t think my political beliefs really fuel my work very often, at least not the work that I put out into the world. I mean, you can probably get a really vague sense of what end of the spectrum my beliefs are at if you dissect every little aspect of my comics and drawings, but that’s rarely where my head is when I’m creating stuff. For a really brief time in college I tried my hand at political cartooning and sometimes I will still find myself reading about some ridiculous political insanity and in a moment of rage or bewilderment will sit down and start writing little comics lampooning one side or the other, but those comics almost never make it past being scribbles in my sketchbook. At the end of the day that’s just not the sort of work I want to focus on I guess. I’d rather make myself laugh.

I think cities are living, breathing things. And how awesome or terrible they are really sort of depends on, well, a lot of things. But mostly it’s inhabitants. So I guess I feel like inhabitants should be asking themselves what can I be or do for my city.