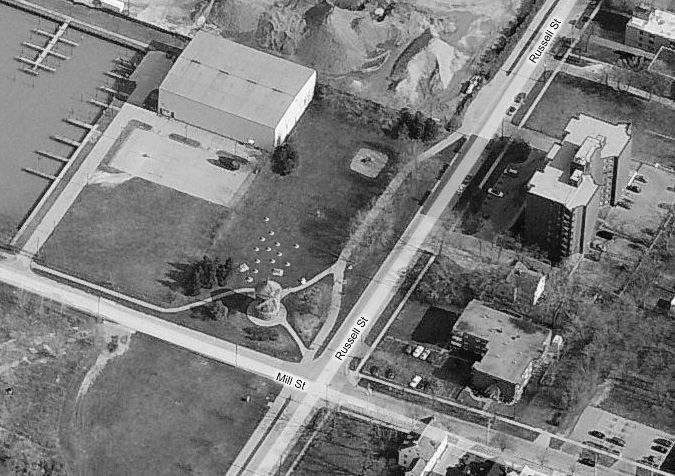 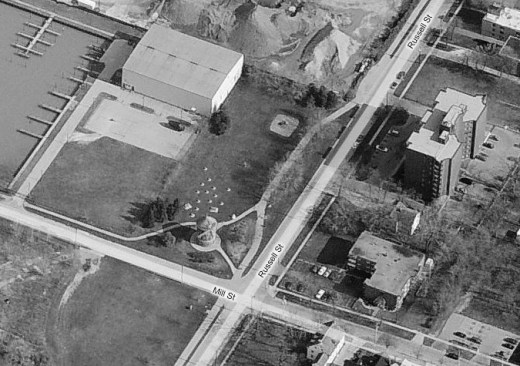 Darren, Josh, and I met with some folks from the Sandwich Community Health Centre and Maya from FedUp to start discussing community gardens. The meeting went well, serving as a good starting point to start figuring out what we might be able to do in Sandwich. The SCHC is working on a site on Prince Road, so trying to get something at the riverfront shouldn’t overlap with their efforts.

After the meeting we did a site visit to start brainstorming, taking some photos and making some notes. Josh and I did some sketches and really rough mockups to try to start imaging some potentials for the garden. We liked the idea of circular planters, similar to the Victory Gardens, I’ve posted on previously, so that’s what you’re seeing in the aerial photo above, with the  planters being those 12 small dots near the windmill. Though, the planters would probably vary in size, and in general would  be larger than what’s mocked-up above.

Ideally, a garden that we initiate can act as a pilot project for the rest of the city. There’s a long way to go with this project, but I wanted to make this first post to mark the start. 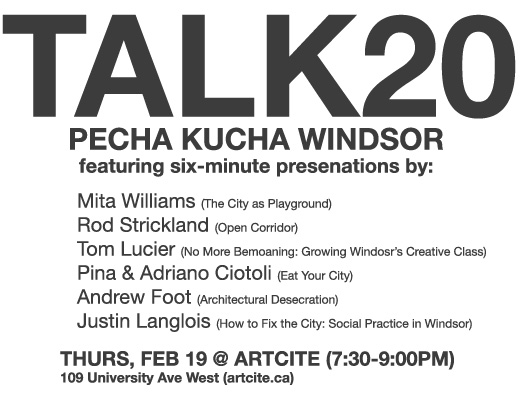 “Talk20 is not a lecture but a gathering, an open forum for the dissemination of ideas in art, architecture and design.  Produced in cities around the world talk20 has emerged as a live catalogue of contemporary creative production that seeks to instigate a conversation within and without the design community.”

The presentations start at 7:30pm at Artcite. See you there! 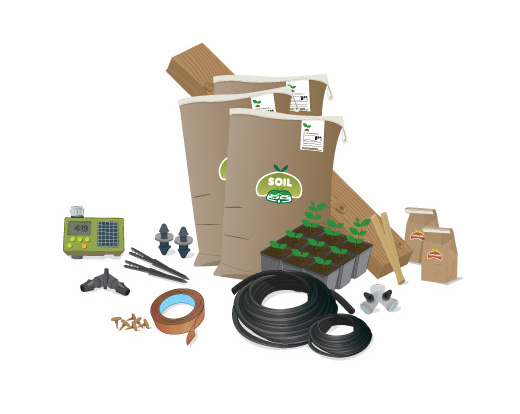 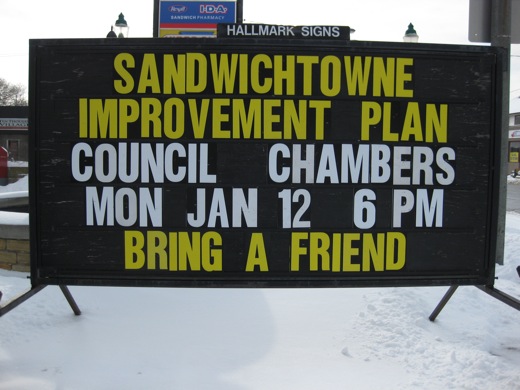 FYI—Sandwich Towne Improvement Plan @ Council Chambers tomorrow night, January 12th 6pm. Not sure if I can make it, but if anyone else does, let us know how it goes. 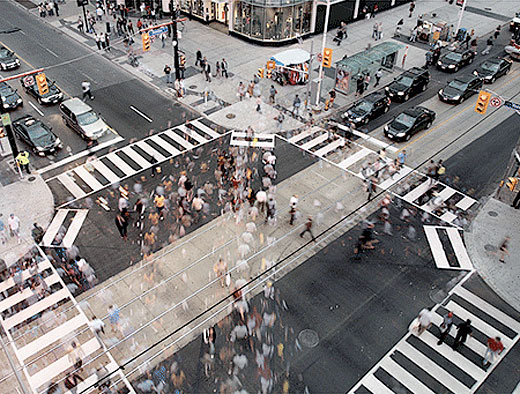 Tomorrow night, December 28th, at 8pm, Spacing Magazine‘s Shawn Micallef  (in conjunction with Scaledown.ca and InternationalMetropolis.com) will be hosting a Psychogeographic Walk through Windsor. The walk will start and end at Phog and will consist of a simple algorithm to get people moving through the city. After everyone comes back, the routes will get mapped, highlighting discovered details and personal landmarks.

For more information and to hear the PSA running on CJAM, check out the post on ScaleDown.

PS. The image above has nothing to do with Windsor or psychogeography, but is a still from a Pedestrian Scramble time-lapse video made by Sam Javanrouh that I saw (and liked) on Spacing Magazine’s website. 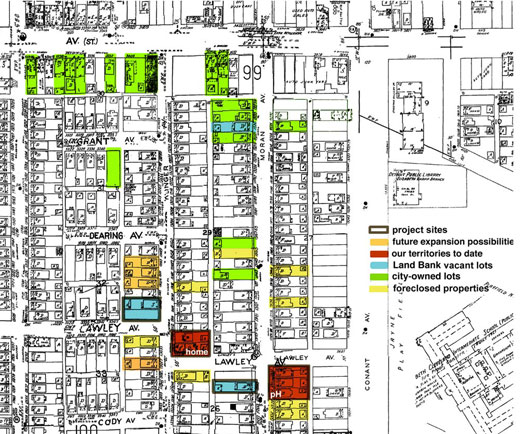 I’m still trying to understand the relationship between Detroit UnReal Estate Agency and Power House (and maybe they’re the same thing and there’s no other relationship to understand), but at any rate, the Power House project is an incredible idea. In short, “The house is to act as cultural catalyst and opportunity for cultural exchanges through workshops and residencies. It will also provide lessons in wind, solar, and sustainable strategies by implementing these systems and introducing them to the community.”

Basically, there’s a neighbourhood in Detroit that has been informally adopted as a site for this cultural catalyst. Many homes in the area have been foreclosed or set on fire, or both. Empty lots are going for $500, while homes are going for $2000. So, the Power House group proposes to purchase these lots and homes and flip the area from a drain on the tax base, bank holdings, and the local economics to a community asset.

I think this could be an excellent group to connect with. 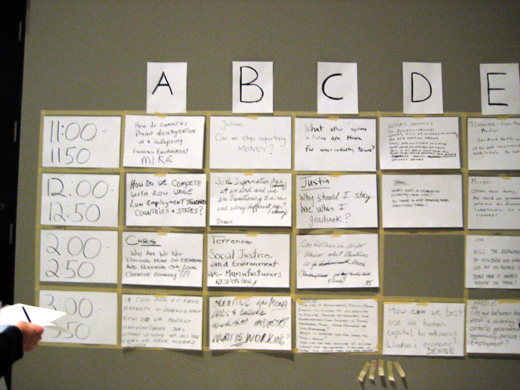 The question I asked in my session was, “Why should I stay in Windsor after I graduate?” I was hoping to provoke not only discussion, but some real things that could happen in this city to encourage me and people like me to stick around after graduation. This is a question I really want to ask the city council and mayor, but that’s another project down the road. A lot of people were receptive to what I briefly described at BCL’s activities and I think we made some new connections with like-minded people in the community.

Tomorrow night there will be a live broadcast of The Agenda in its regular roundtable discussion format, and I’ve been asked to reiterate my question on live television. 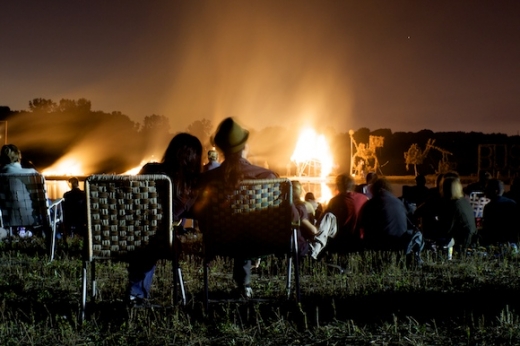 Last night was the 6th Annual Fahrenheit Festival, presented by Artcite Inc. and the town of Lasalle. It was incredible to see such a huge crowd, likely around 1200 people or more, out to see fire sculpture. The location was amazing, with 12 sculptures sitting on a little patch of land cutting through the middle of a very large pond, and a nice slope for the audience to sit with a great view of the entire show.

Along with the big burn itself were a series of talks and workshops on fire art, which really rounded out the festival, and for those that were able to make it, helped to give context to the wider ideas of fire art. The scale of an event like this is somewhat staggering, given that Artcite has just two extremely dedicated employees (but thankfully an amazing bunch of volunteers), though what impressed me most is that there is in fact a sizable audience for public creative activity in this area.

Note that this event happened in Lasalle and that Lasalle along with Artcite were successful in writing a Trillium grant to make this happen. I’m not sure of the history of the event, if it was ever attempted in the city of Windsor or not, but it’s inspiring to know that there are places in this region that view the arts as n opportunity for partnership. 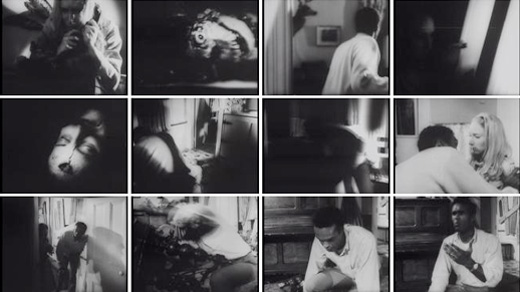 Broken City Lab is going to organize an outdoor screening of one or two public domain horror/sci-fi movies sometime in October. I’ve compiled a short list of possible movies to screen, including the above Night of the Living Dead, though we’re certainly up for suggestions… What’s your preference?… Let us know in the comments…

END_OF_DOCUMENT_TOKEN_TO_BE_REPLACED 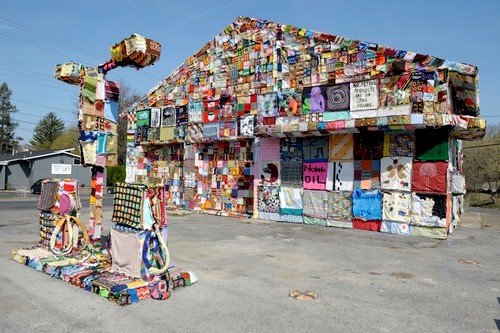 Jennifer Marsh’s International Fiber Collaborative gathered 3,000 fiber panels to cover an abandoned Citgo gas station in central New York state. The panels were collected from students and artists spread across 15 countries. Very exciting potential for a collaborative public art project. On top of organizing the project, Marsh also gave workshops on how to crochet and make the panels to a number of students in New York and Virginia.