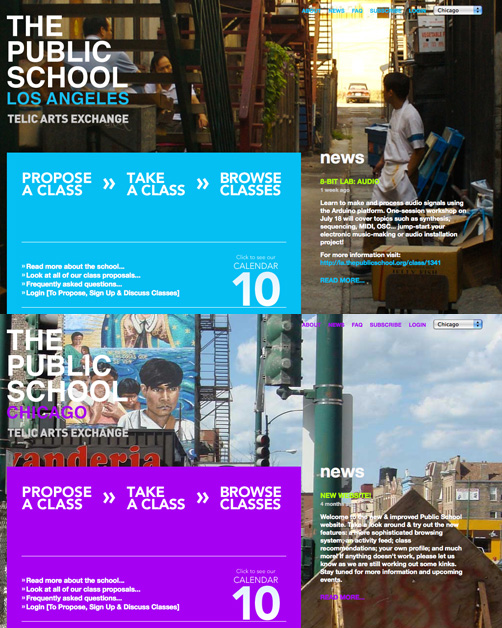 The Public School is an initiative by Los Angeles’ Telic Arts Exchange, and, so far as I can tell, the basic premise is this: people interested in either teaching or taking a short-term class on a given subject propose that class; other people interested in such a class express their interest on the School’s website, and proposals eliciting the greatest public interest are selected to be taught. Nominal fees are collected, an instructor and curriculum are settled upon, and then the class is held at a space provided by the School. Topics already selected range from gold leafing and piñata-making to discussion of Benjamin’s Arcades Project and conceptual choreography. And S&M. And composting.

So far, the School has also launched programs in Chicago and Philadelphia. Now, it’s difficult to imagine the exact same system working in precisely the same way in a city the size of Windsor (put simply, there likely aren’t enough interested parties for the same degree of “crowd-sourcing” to be practicable), but as an organizational model for knowledge- or skill-sharing, I think there’s a lot that could be taken from the School’s format.

I’ve written here before about the potential that comes of having a physical space out of which to work, and something like this is perhaps one of the more compelling possibilities. The “school” here is, in effect, an empty classroom: the curriculum and schedule emerges out of a collective desire to see a given thing happen. And then it happens.

People everywhere have knowledge and experience that, in large part, goes under-utilized. It’s not difficult to imagine finding a couple-dozen people willing to chip in ten bucks for a silk-screening workshop, but, at the same time, there’s potentially something to be gained by bringing together four or five dedicated turbo-nerds willing to spend a night each week talking about—I don’t know—European versus North American histories of site-specificity in artistic practice and how these come to bear in current understandings and implementations of “relational” creative activity (only one example, of course). For the particular terbo-nerd leading the seminar, that outlet and the even-slight reciprocity of interest could mean the difference between sticking around and giving up and moving to Kitchener (“the Ghent of Southern Ontario,” I hear they call it). Or something. I don’t mean people like me specifically, of course; I’m just saying.

I could also teach gold leafing. Or piñata-making, come to that. Just saying. 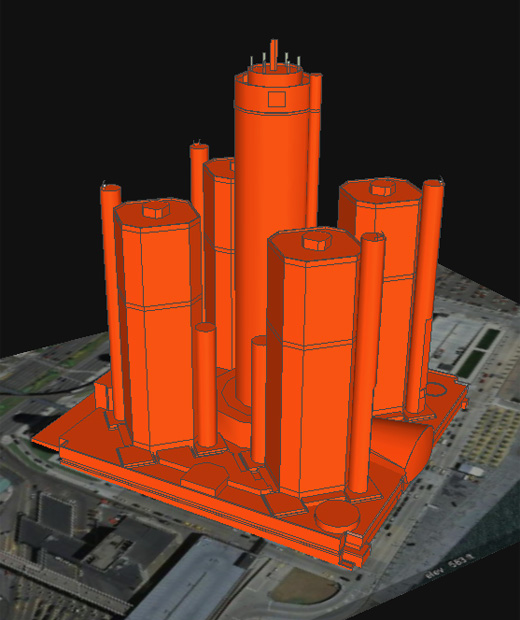 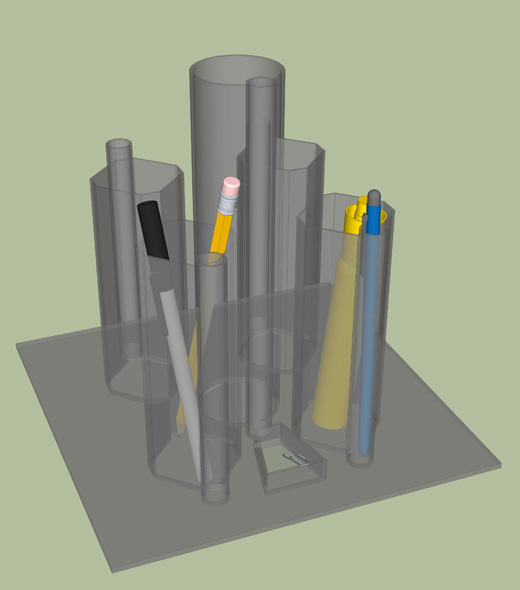 I don’t know how; I don’t know when, and I don’t even really know why, but I’m determined to one day make or have made a GM Renaissance Center desk organizer.

While trying to find good aerial shots of the complex, I found that the reliable band of volunteer turbo-nerds at the Google Sketchup 3D Warehouse have come through with alarmingly detailed models of both the Ren-Cen and the Ambassador Bridge (sadly, nobody’s taken it upon him or herself to mock up the Casino, though this Renaissance Center in Lego almost makes up for that).

I don’t know what anyone would do with either of those, really, but I find it difficult to believe that there isn’t a 3D printer squirreled away somewhere on campus (perhaps someone working as a sessional instructor could look into that and pull some strings—paging Professor Langlois). In the mean time, here’s everyone’s favorite Brutalist monstrosity done up in Tiggerific Orange. 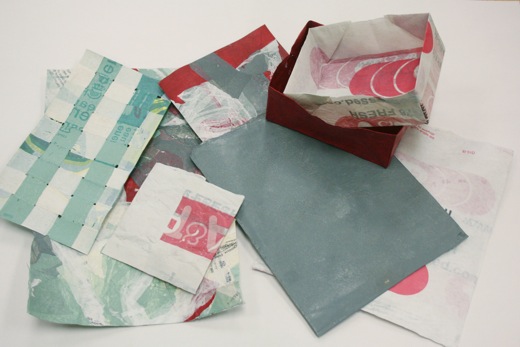 Justin has some process shots, and those will probably be posted at some point, but I figured I’d go ahead and share the product of five or so hours of ironing inside-out plastic grocery bags. So far, I’ve made some envelopes, a box, and some random swatches to see if leftover scaps can be fused into a solid sheet (they can). Eight layers (four bags or one bag folded on itself twice) yields a stupidly strong, Tyvek-like material that can be fused to itself (that is, you can fuse seams to make envelopes or pouches or fuse multiple, smaller sheets together to make a piece of material any size). Uhm. And you can also weave strips together and fuse that (top left), but that doesn’t really have much in the way of practical applications.

And there’s these guys: 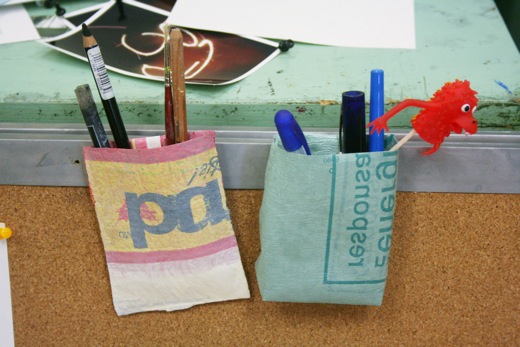 Each pouch is made from a single bag, and the one on the left is actually compostable (if any of you are Bulk Barn shoppers, you should hang onto those). I do ever so wonder what we’ll do with biodegradable plastic (read: mold-proof) pouches with rare earth magnets embedded in the back… 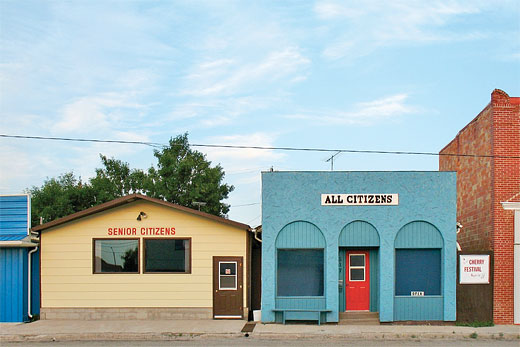 I spent a good part of my afternoon today reading through the blog archives of All Citizens, an artist-owned shop and periodic performance/art venue in Bruno, Saskatchewan (90km east of Saskatoon, population 495, as of the 2006 census). Two Vancouver artists, Serena McCarroll and Tyler Brett, evidently purchased the building for $6500, and they keep it open as a shop one day each week (Saturdays) in addition to maintaining a farily active events calendar. Because one can do that.

This bears repeating: one can do that.

Spaces are exciting. The same empty building or floor can be, depending on the occasion, a gallery, a shop, a cafe, a meeting place, a performance venue, a studio—a lab, if you will. Places like Load of Fun in Baltimore are exciting; Chicago’s apartment galleries are exciting; BCL’s space downtown this month is exciting; the forthcoming storefront exhibitions for Windsor’s Visual Fringe Fest—despite the unfortunate association with fringe theater—will no doubt be exciting (I did one last year, and I may yet do another one before I pack it out west, this summer).

Now, there aren’t quite buildings to be had in Windsor for $6500, but I happen to know—because trawling real estate listings is one of my stranger hobbies—that there are vacant commercial properties available in this city for the same cost one might pay for a new car. In fact, if I was going to be staying in Windsor past July (I am not), I would be sorely tempted to make an offer on this cigar shop downtown (on Ouellette between Park and Wyandotte), which is listing for $25k. To put that into human terms, a mortgage on the place would be comparable to what many people pay each month for cable television. 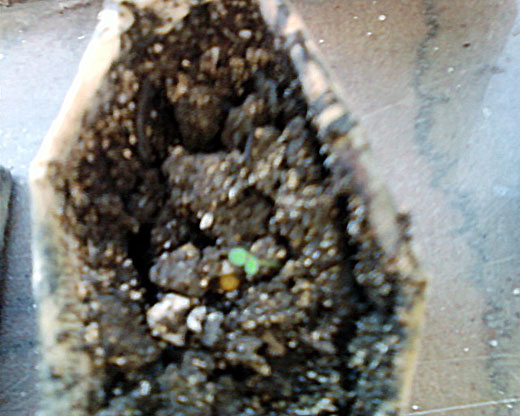 A plant! In the planter! That’s what they’re there for! Hooray, plants! Hooray, exclamation points! Sorry about the blurry cameraphone picture! You’ll be grateful for that in a minute, however! Since the real action over the weekend wasn’t so much in the planters as… ehr… on them. 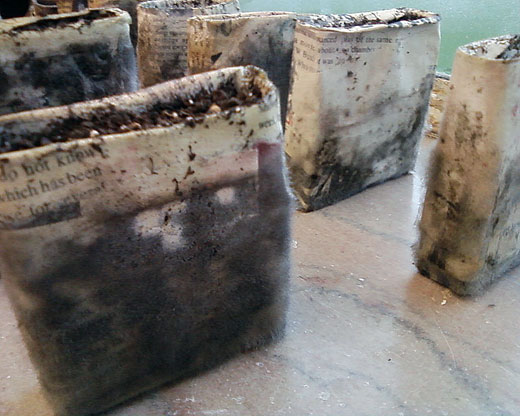 Now, plants are not really my forté, but I’m fairly certain that this is… not the desired effect.

Everything was fine when I checked in on things, Saturday. Nothing had dried out terribly, and I hardly added any new water. That nothing had dried out, with hindsight, should have been troubling in and of itself. I didn’t make it in yesterday, but this is what I encountered, today.

Mold isn’t really my forté, either (despite this apparent photographic evidence to the contrary), but I would guess the factors contributing to its… particular success, in this instance would have been these: (1) the planters were packed into a plastic tray quite tightly—this was clearly not the way to do things; (2) my studio has been a veritable sauna for some time, this weekend in particular; (3?) I wasn’t there for this round of planter construction, so I’m not sure if wheat-paste was involved, as it seemed to be in some iterations, but, if it was, I can see how that might have been a virtual signed invitation for any errant spores (and LeBel is teeming with them) to take up residence.

So there’s that. I’ve left them standing apart to dry out, but I’m not sure if that’s going to help much. I’m thinking perhaps it won’t? 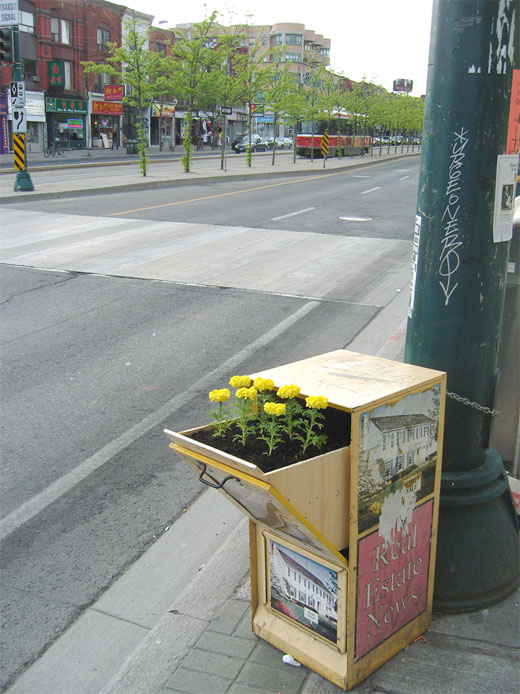 I don’t generally have much use for CRAFT: magazine (now relegated strictly to blog-format). Allow me to summarize: “I made a(nother) cake stand! My T-shirt blinks! Who likes cupcakes?! Aprons rule!” But, for all its disingenuous crypto-consumerism and further-watering-down of the Third Wave, they do occasionally link to something interesting.

The flyer-box planter is nice-enough, in and of itself, though it might be even nicer to see retired newspaper veding boxes repurposed in this way. I mean, in the print-to-digital shift, I don’t think anyone much misses the real estate listings (the free weeklies are another matter), but something like this could conceivably work to draw attention to, say, the problematic bloggification of print journalism, in addition to your standard-issue urban blight. 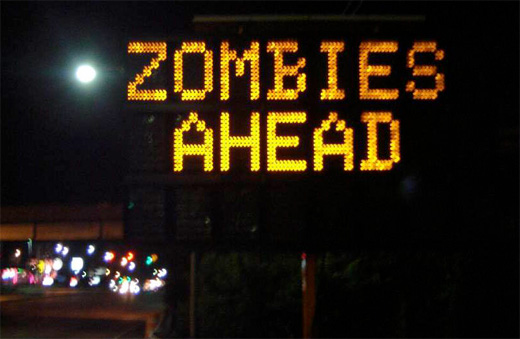 While it would be highly illegal, potentially unethical, and generally a very bad idea to hijack one of those blinking road signs, either as part of a thoughtful and considered public intervention or simply in the name of free-spirited high jinks (pictured), illustrated instructions for doing precisely that are available for perusal by the curious. [via the heretofore useless-to-me car blog, Jalopnik] 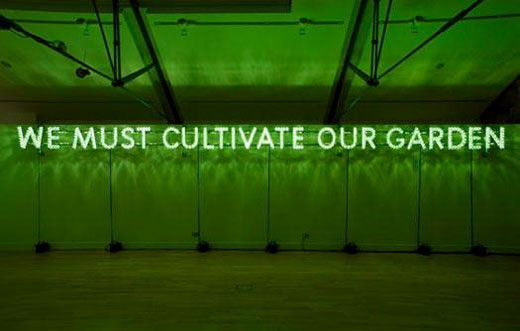 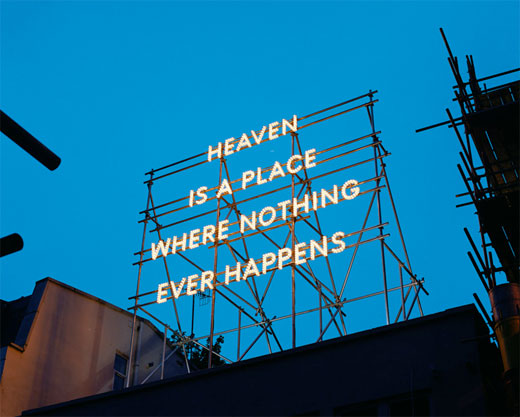 Nathan Coley – Heaven Is a Place Where Nothing Ever Happens (2008)

Since one of the recurring project ideas for BCL has been to “send a message to Detroit” (though this particular wording sounds decidedly menacing, which is hilarious and probably unintentional), and since one of the ideas for accomplishing this was to build a lighted sign that would be visible across the Detroit River, I thought it might be appropriate to bring Glaswegian artist Nathan Coley into the discussion. 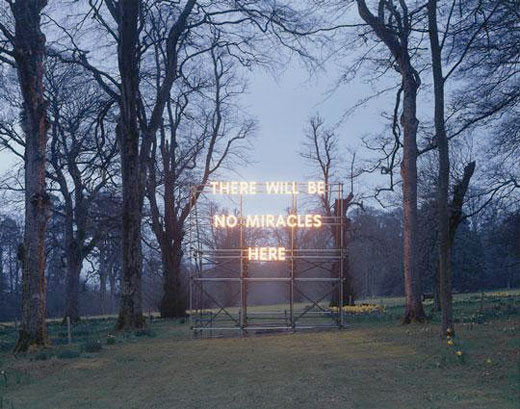 Coley is perhaps best known for his incandescent light signs, such as these, and, while the tenor of his work is decidedly more dour than much of what the Lab sets out to do, his work does bring to bear certain issues that might be of interest. In particular, his work explores the ways in which modes of public address—particularly architecture—constitute articulations of collective desire and belief, the “values” of a place. Coley himself has a particular chip on his shoulder re: organized religion (which I, for one, appreciate), but some of the issues he works through might be more broadly-applicable, just the same.

If Broken City means to “disrupt and engage the city,” it’s important first to have a sense of what values are embodied in the existing structures and infrastructure of that city. I’m quite sure I’ve spent a good deal less time thinking about this than many of the other people here, but, so far as I can tell, Windsor’s public front would seem to suggest a firm conviction in the redemptive potential of (1) the automobile, (2) the Casino, (3) trans-border truck traffic, and (4) massage parlors. It’s not quite the historical God and country business that Coley contends with, but I don’t see any reason why the tactics he employs couldn’t be as well-suited to the interrogation of a strip mall as they are to places of worship, etc.

Anyway, this interview, given on the occasion of his nomination for the 2007 Turner Prize, is definitely worth a look, as are pieces like this one from 2006 where he makes use of dazzle camouflage (a geometric camouflage pattern developed in Britain by artist Norman Wilkinson and used extensively during World War I).

Nathan Coley – We Must Cultivate Our Garden (2007) 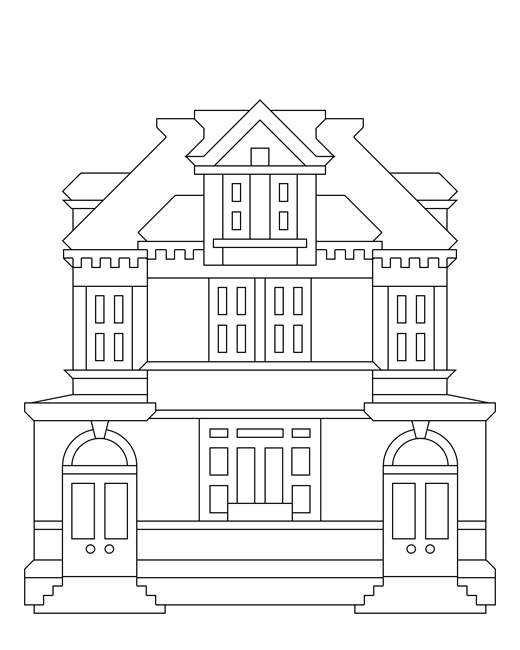 I’ll write a full post when it isn’t nearly three in the morning, but I just wanted to toss out this thing that I started working on tonight.

A couple of us are trying to come up with any number of actions that might serve the dual purpose of helping to stave off (or at least forestall) the proposed closure of one of Windsor’s only two independent urban post offices, while at the same time gathering primary sources concerning the makeup, operation and needs of the Sandwich neighborhood.

I think a coloring contest may be somehow involved.

Possibly. Or not. We’ll see.