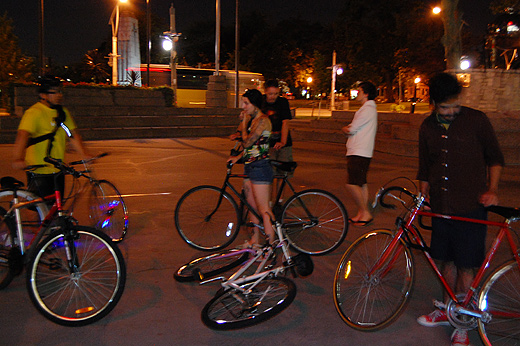 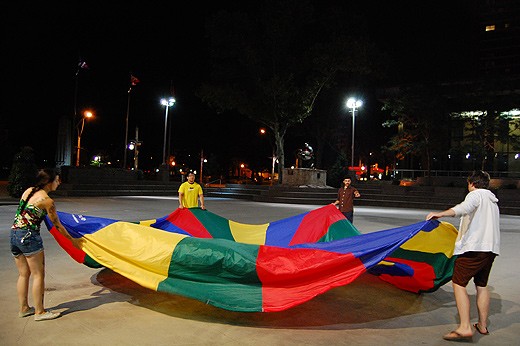 This summer, some friends and I have been looking for cheap or free ways to have fun. We recently got a hold of a giant parachute like the ones from elementary school gym class. We took it out to Charles Clark Square to have some fun on Tuesday night. Earlier on this month, we filled a spare bedroom in my house with balloons to play in. 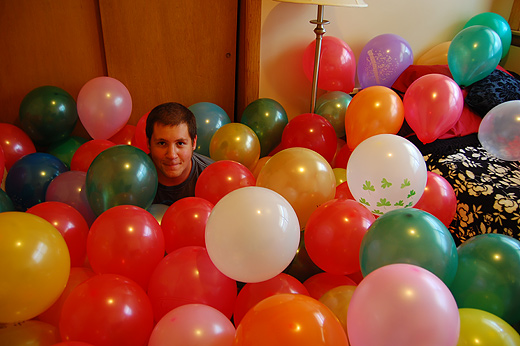 The balloons started out as a surprise for a friend, then lead to a temporary playroom that lasted about a week. We used around two hundred balloons to fill the space, which took around five of us all day to blow up in shifts. 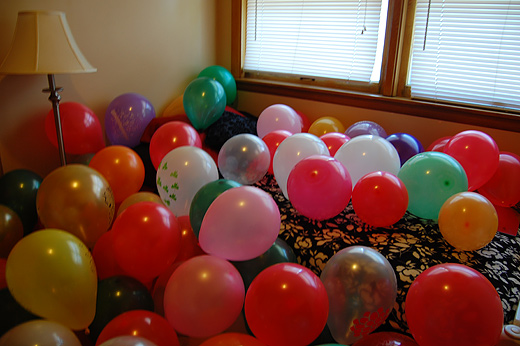 Three people could fit comfortably in the balloon room to play. The room had no breakables or serious obstructions other than this lamp and the bed. 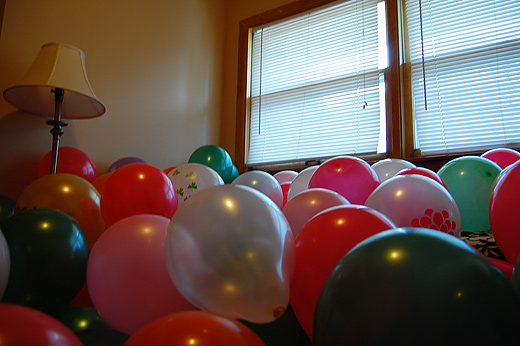 The balloons went up to the waist while stagnant, but really filled the whole space when people started moving around, kicking and lifting them up. 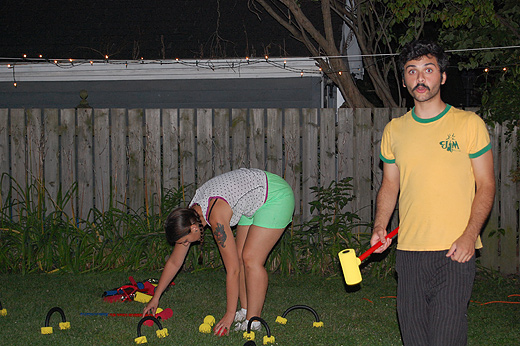 On Tuesday, my roommate Kiril Lazarevski took home some outside toys from the YMCA where we works as a day camp councillor. We set up lawn croquet in our backyard and played until the mosquitos took over. 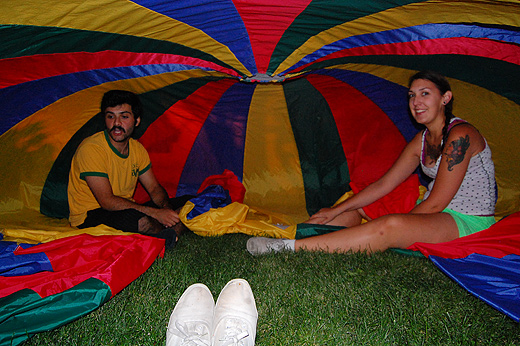 We also took out a giant parachute and played with it for a bit, quickly realizing that we needed a few more people to really get the most out of it. 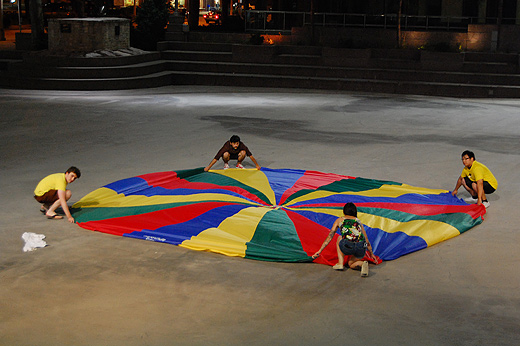 We called up some friends and biked down to Charles Clark Square, an outdoor skating rink in the downtown core that could serve many other purposes during the off-season. 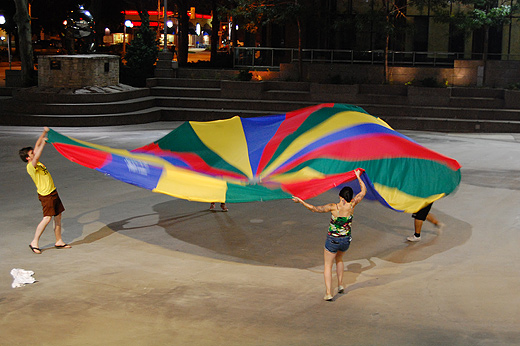 This location was ideal to play in due to the overhead lighting (which turned off at the stroke of midnight) and the large open space. 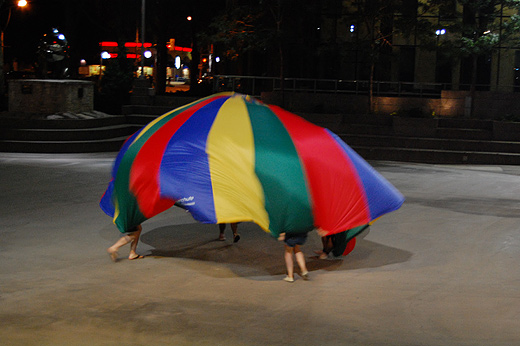 The preferred game to play was ‘parachute tent’, where everyone lifts the parachute up over their head, and then tucks it underneath them as they sit on it. 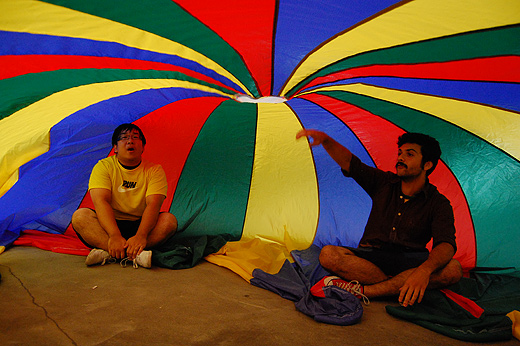 Lifting up the parachute takes a surprising amount of energy and is actually a pretty good cardio workout. Looks like our gym teachers knew what was up after all. 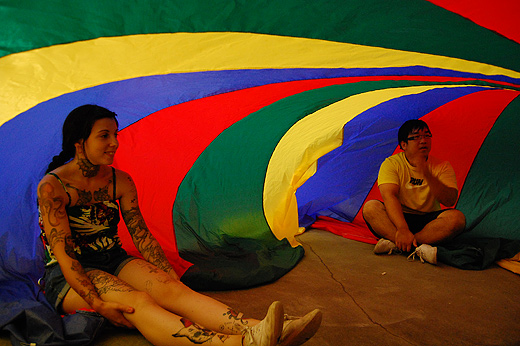 The parachute tent lasts a good 3 minutes before the air escapes completely. Assuring that there are no gaps between the parachute and the ground is essential. 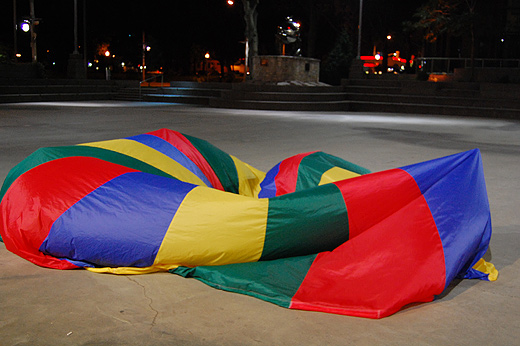 The escaping air makes for some interesting shapes seen from both the exterior and the interior of the makeshift structure. 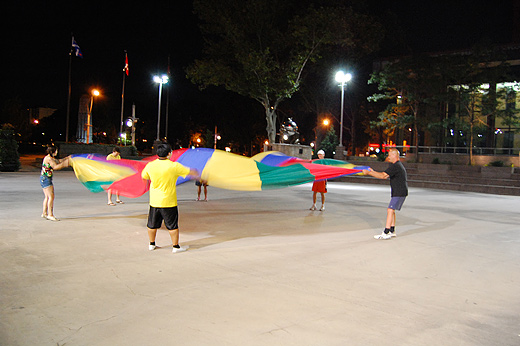 Some casino-goers crossing through Charles Clark Square stopped by and asked if we needed and help. They were keen on playing with us as long as it was classified as ‘help’ rather than ‘play’. They seemed to enjoy themselves nonetheless.

Shortly after the lights went out at midnight, we packed up and biked home. I wonder how much it would cost to purchase one of these parachutes? I was nice to have the ability to use one through Kiril’s employment connection at the YMCA. I am also wondering if it might be possible to make one?

3 Replies to “Balloons and Parachutes”