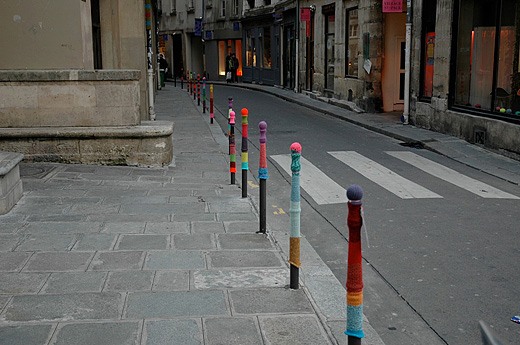 Knitta formed in 2005 out of frustration of unfinished knitting projects sitting around the house. Instead of trying to finish sweaters and mittens, they decided to go out and bomb the city’s infrastructure (and sometimes garbage) with yarn, starting with their hometown of Houston, Texas and eventually tagging the Great Wall of China. Above you can see a project they did in France. They’ve gotten a lot of mileage out of this project, though things seem to have slowed over the last year.

Anyways, it reminded me of that idea Michelle brought up about dressing up infrastructure in the city for Halloween.