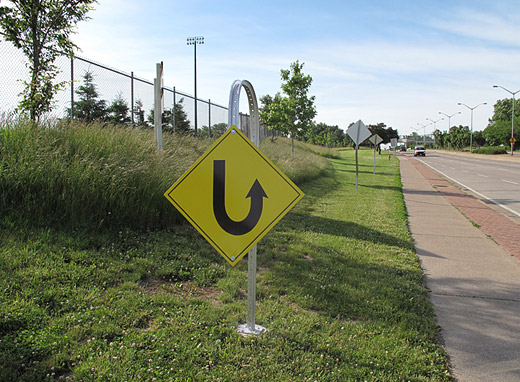 As part of the Green Corridor‘s Open Corridor festival, Windsor’s Lucy Howe installed a series of wilted road signs, entitled Wilt. The signs themselves reiterate the bend, or wilt, in its respective sign pole and simultaneously comments on some of the many issues surrounding this stretch of road, and the kilometer or so to its north. The signs were originally installed as pictured above, but shortly after their installation, a City of Windsor truck came by to take them down.

Thankfully, the signs were recovered before being carted away and are now installed on the Northeast corner of Huron Church and College.

Howe’s work has an incredibly fun way of intervening with infrastructure and the everyday. All of the work is amazingly labour intensive, but so expertly pulled off that it can make you continually guess at its sincerity in the best way possible. If you’ve been to the AGW lately, you would have seen her work—a drooping chair and melting wall on the second floor as part of the Biennial.

Howe has another work in her archives that I’m hoping she’ll work on again, if the right place can be found. The work involves reshaping a chain link fence’s form and function, how could I not be in love?