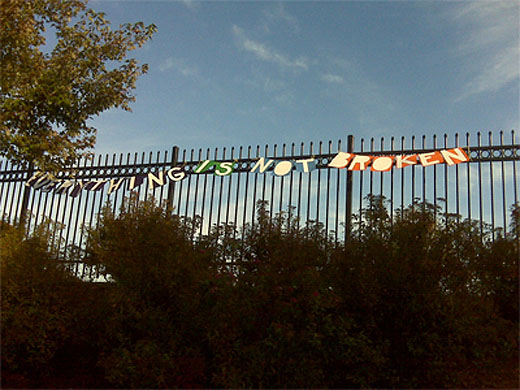 I’ve been pointed to Learning To Love You More on a number of occasions, though it’s only recently that I’ve dug into the site a little bit more. The project was initiated by Miranda July and Harrell Fletcher in 2002 and works around the assignments that participants are supposed to complete and document and send back to be posted on the website (and sometimes included in a book, an exhibition, a screening, or a radio broadcast). The image above is from Assignment #63 – Make an Encouraging Banner. I think if I were to have made a banner, it might have been something like that one.

That the project does get a fair amount of participants is inspiring, but the thing I like the most are the ideas of the assignments themselves and the fact that they exist, that they were written down, thought about, and attempted. Making a list is, at the very least, a starting point of fixing something.

3 Replies to “Make an Encouraging Banner”