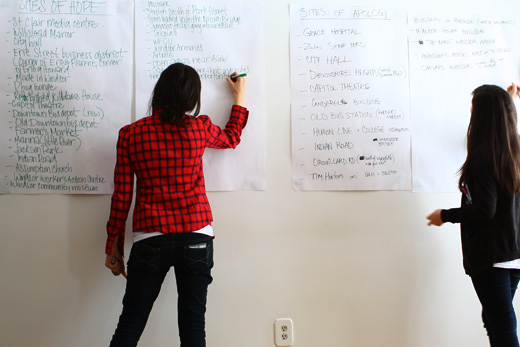 Just a quick update from Sunday’s Save the City event: Sites of Apology / Sites of Hope … Thanks to the amazing group of people who turned out, we have nearly 50 sites between the two lists (which you can see in progress, above).

A part of this project involves us going around to each and every site on these lists and officially recognizing it as either a site of apology or a site of hope. Since we have 50 sites on our lists, we were beginning to run out of daylight on Sunday afternoon. That means that we only managed to visit about half of those sites, so we’re trying to find a second day to continue with our adventure.

We’ll post all of the photos from the event and a photo of every site we visit as soon as we finish!

The next Save the City event happens on March 20th, 2010 — more details soon.