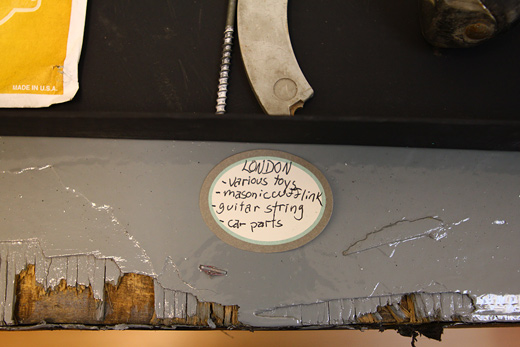 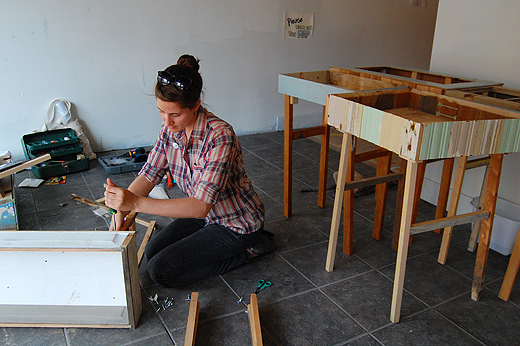 Lea Bucknell arrived from British Columbia to take over the window display of 424 Pelissier, Andrea Carvalho sent pictures of her last tactics in Windsor from Montreal, and SRSI participants get a surprise gift from a local fan. 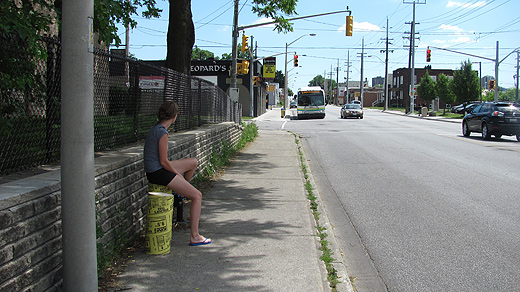 During the last few days of Andrea’s residency, she performed public interventions at bus stops and inside of the Transit Windsor downtown terminal. 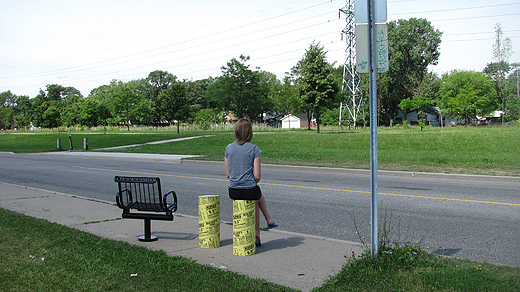 With the intention of creating seating for people waiting for the bus, the insertion of these benches at the stop makes the space inviting and social rather than lonely. This is a perfect intervention for Windsor due to the recent removal of the concrete benches that could provide seating for numerous people , replaced by one single chair. The new seating seems to inhibit the use of the transit system, something that should be encouraged. 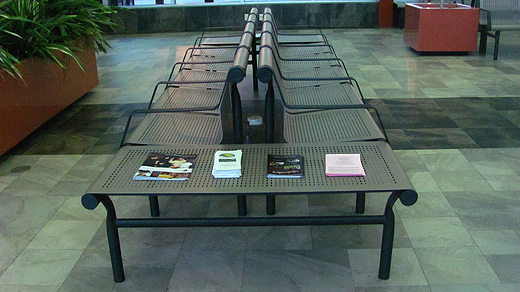 Andrea’s small and powerful actions reach the city residents on an individual level, both engaging and connecting the artist directly to her surroundings and the transit system patrons who can relate 100% to her interventions. 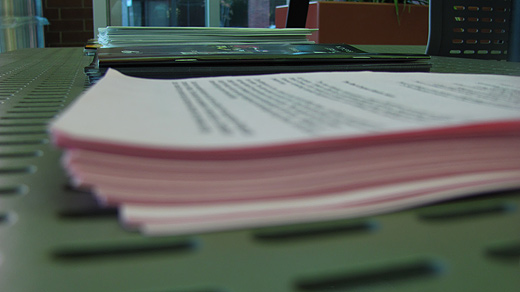 Andrea also left some reading material inside of the terminal downtown to insert something other than corporate signage and pamphlets that people could relate to on a personal level. 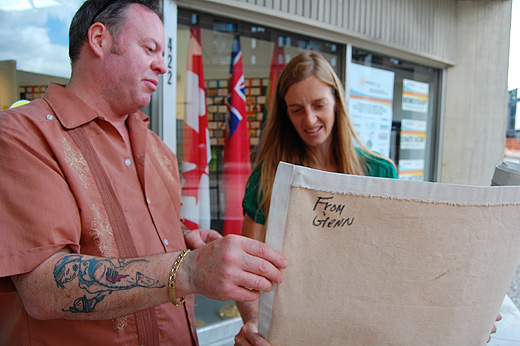 Glenn from Biscuits and Gravy down at Pelissier and University sent over some gifts for Julie and Norman. He gave Julie a thoughtful painting purchased from the Annual Artcite Xmas Sale. 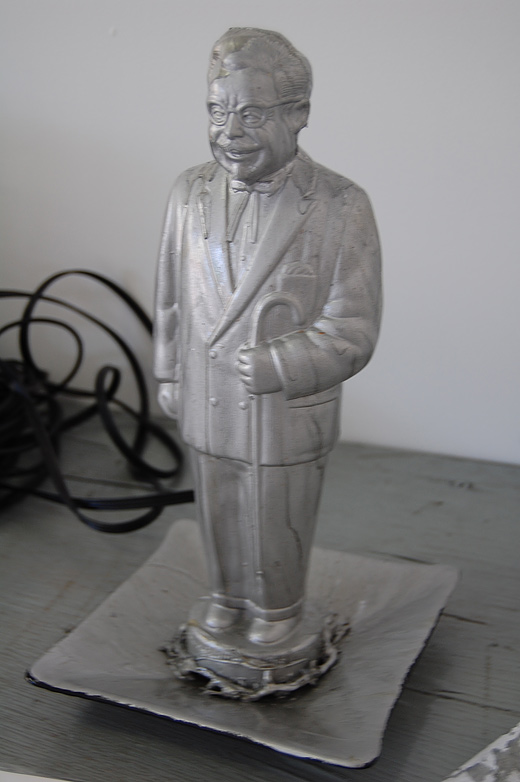 This is the award Glenn gave to Norman, smelling a fresh spray paint and hot glue, the award for best security guard was accompanied by a note. 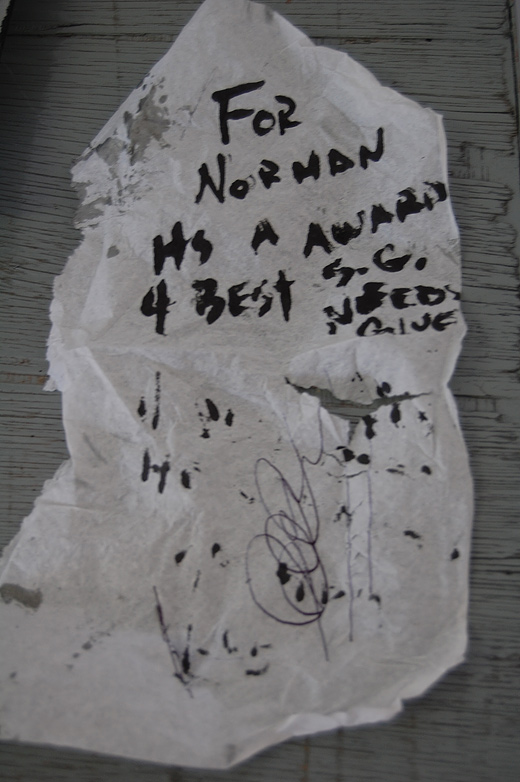 This note was the only clue as to who had left the treasures first thing in the morning until Glenn stopped by a couple hours later, solving the mystery. 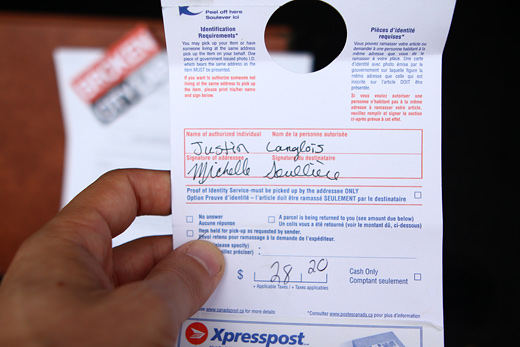 On Thursday morning Justin and I went down to the post office to pick up a package shipping by Laura Paolini for her Bell Payphone Labs project starting July 1. 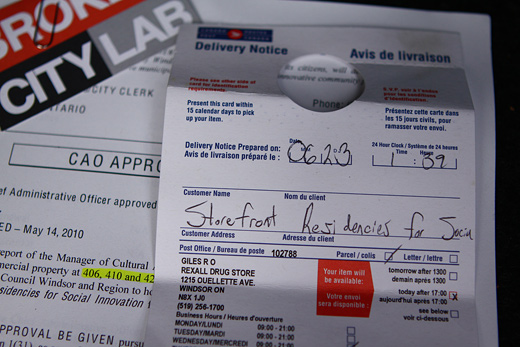 Over the phone, the post office worker advised me to bring proof that we were legit, so Justin put together this nice little package of legitimacy including our lease agreement, business card and printed “about” section of this blog. 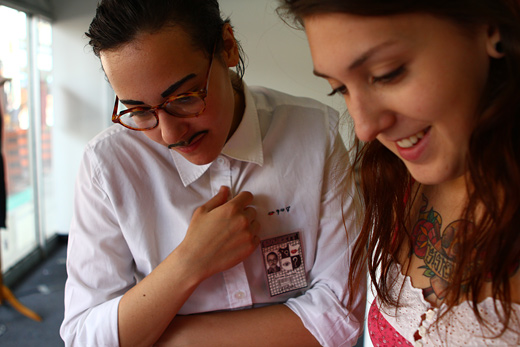 We brought the package back and opened it up in 410 with Norman standing by just in case there were explosives to protect us from. 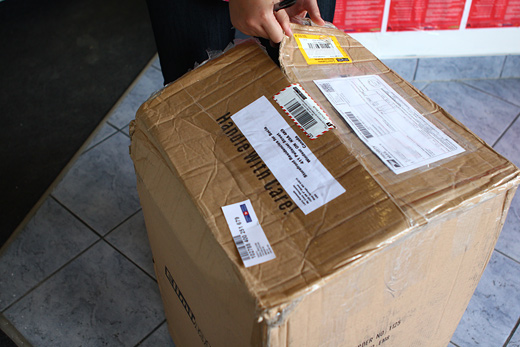 A special secret was inside!  Be sure to stop by 400 block of Pelissier after Canada Day to check out what Laura is up to. 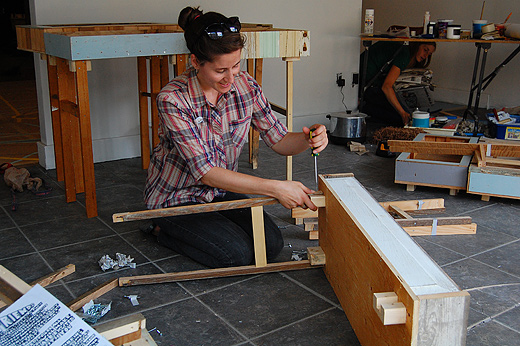 Lea Bucknell began setting up her installation in 424 on Wednesday morning. She spent most of the first day building her planters and positioning them within the display space in the front of the store. The colour scheme of the planters is an unexpected perfect match the colours used on The People’s Museum map in the back floor space right behind Lea’s installation. 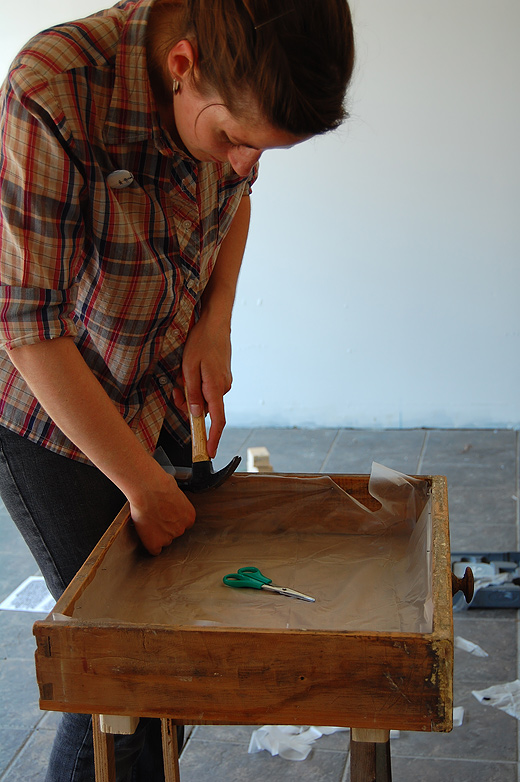 Using recycled wood and dollar store shower curtains for liners, Lea is prepping the boxes for local soil and plants she will retrieve by bicycle from each ward in the city of Windsor, then holding a Garden Party inside of 424 Pelissier June 30, 7pm. 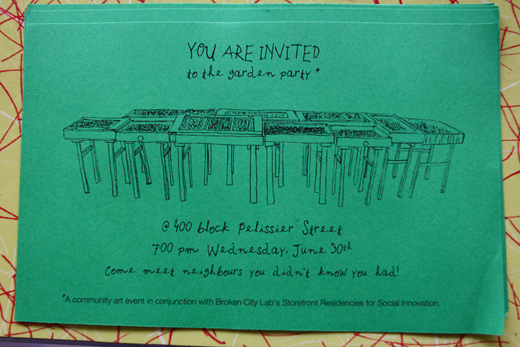