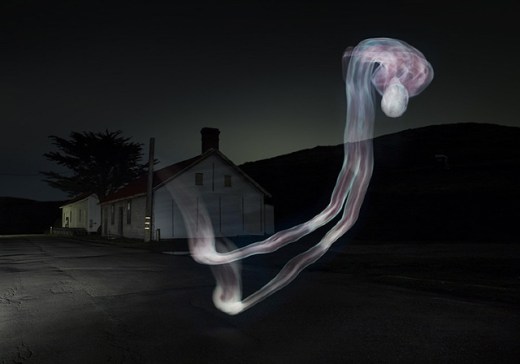 Since the film-trailer-like synopsis of Croix Gagnon and Frank Schott’s project 12:31 is so epic, I think I’ll start by including it verbatim.

“In 1993, a convicted murderer was executed. His body was given to science, segmented, and photographed for medical research. In 2011, we used photography to put it back together.”

After the page break I’ve included a description of the process involved in making this happen.

Via: Today and Tomorrow

The photographs were created by combining night photography and long-exposure photography using an animation of all 1,871 slices of a male cadaver. “The animation was played fullscreen on a computer, which was moved around by an assistant while being photographed in a dark environment. The resulting images are long-exposure “light paintings” of the entire cadaver. Variations in the movement of the computer during each exposure created differences in the shape of the body throughout the series.”