Dear Indian Road is near the very top of my list of favourites from Daragh Sankey‘s nearly complete documentary series on our Storefront Residencies for Social Innovation project. It’s kind of unreal to think about the things that have changed (and haven’t) around Indian Road, the border crossing, and the fallout from this ongoing political and infrastructural battle.

Here’s Daragh’s background on the video:

I was quite impressed by Leesa’s project. The visual impact, the collective participation, the subtlety of its activism – it all came together beautifully.

When it came to the issue of representing Indian Road on film, I couldn’t get it out of my head that the ideal technique was a single tracking shot. The road is patrolled by private security hired by the bridge company, so I wasn’t about to go lay down track or get a steadicam rig and walk the length of it. The answer was a surreptitious car mount. I found a cheap suction mount and stuck it on there. This was about a year after the residencies. My lady friend and I rented a car and drove up to Windsor to get this and a few other shots (there was some car mount footage in this one too), but unfortunately the car rental place I used didn’t let you specify what model you wanted, so we wound up trying to sneak up Indian Road in a bright orange jeep with a camera mounted on it. Like the ninja! But somehow we stayed out of trouble, and I’m very happy with how the footage looks.

This is the semi-final film. Next will be a brief coda wrapping up the series. I still have tons of great stuff dealing more specifically with Broken City Lab themselves, but I’m not promising that any time soon.

There’s more here on the rest of the In Store series.

Another week, another instalment of In Store by Daragh Sankey. Having these weekly videos is so great and it’s amazing to look back on all of this. So, here’s the story this week:

This week, we follow Thea Jones over the Ambassador Bridge to Detroit.

Thea had recently done a research paper about Detroit. I’m pretty sure she was drawn to the Windsor residency for the opportunity it presented to visit what has become the poster child of broken post-industrial cities. I also was fascinated by Detroit; I’m sure many of us are. Toronto, where I’m from, is sort of the opposite: a thriving, very expensive downtown, where successful information & service industries have replaced industry. 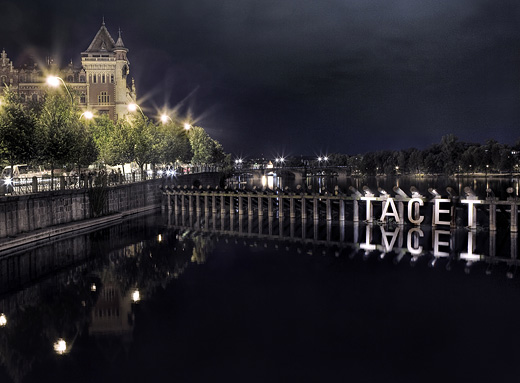 So we didn’t get a Rhizome Commission, but it doesn’t mean we’re not still planning a way around making Cross-Border Communication happen.

In the meantime, we’ll keep collecting images and reference points about ways of imagining the project happening.

Above is TACET by Ulla Rauter, which refers to acoustic pauses by drawing on the urban background noise making it the unwritten score of that piece of art. There’s something about instructive text that I quite enjoy. 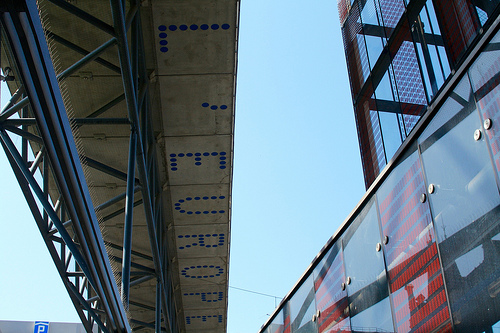 Thinking mostly about the Ambassador Bridge, but generally about any overhead infrastructure, and wondering if limiting our larger hopes for roof-based painted messages is potentially ignoring a great opportunity for other messages.