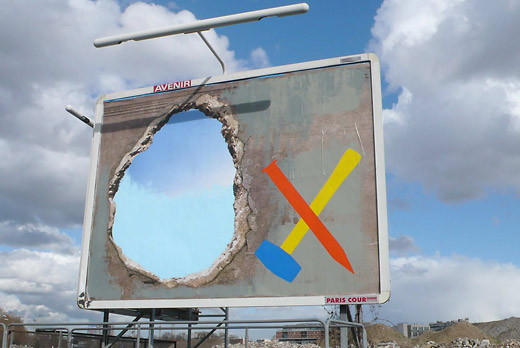 The artist has sent us a few emails in the past, so I’m happy to finally be able to post about it. You should check out OX’s site featuring a huge number of works and on the Poster Time blog. Many of the interventions are quite playful, other times being rather loud with oscillating colours and lines.

Having just arrived back from the Creative Cities Summit, and hearing a really incredible presentation by the organizers of the Philadelphia Mural Arts project (which we’ve posted about before), I’m feeling rather anxious to consider how we could transform the many, many surfaces across the city that intensify the sense of non-place that seems endemic to Windsor. 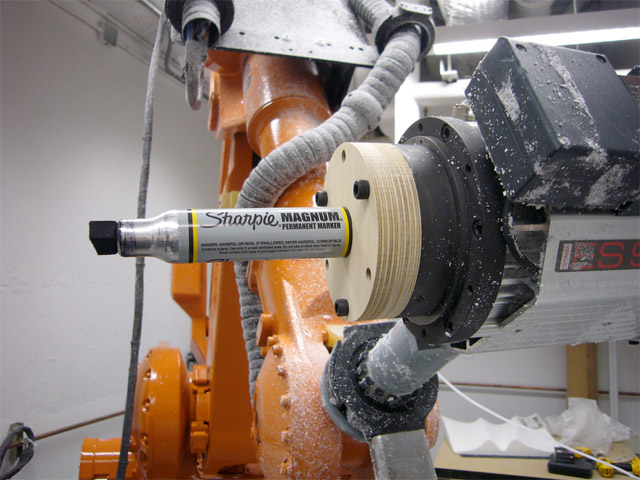 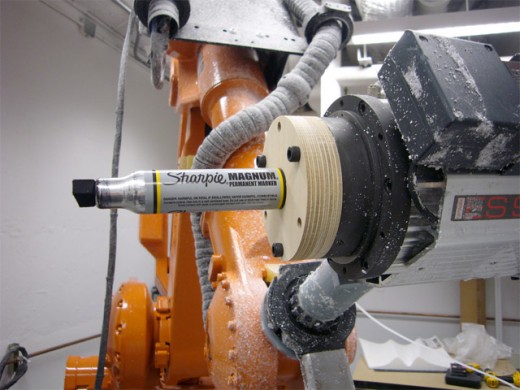 It took a while. A little over a week I guess. However, it finally clicked — FAT Labs’ latest project #000000book is starting to make sense to me in terms of how big it could be.

Part of the problem may have been just the early overview of the project that circulated the blogs: #000000book is an open repository for sharing and archiving motion captured graffiti tags. Tags are saved as digital text files known as GML (Graffiti Markup Language), which can be captured through freely available software such as Graffiti Analyisis (marker), DustTag (iPhone), EyeWriter (eye movement) and Laser Tag (laser). Graffiti writers are invited to capture and share their own tags, and computer programmers are invited to create new applications and visualizations of the resulting data.

It just seemed to me, initially, that there would be this collection of tags that had been sort of digitized through an open platform, but I kind of thought, so what? But, I knew that it had to be kind of groundbreaking. Most of the projects that involve this mix of technology and graffiti that I’ve seen come out of GRL or FAT have been very, very cool, in the way that they think about mixing tactics and tools.

#000000book is no exception, as you can see above, Golan Levin hooked up a robotic arm to read from the GML database to reproduce a tag. We are in the future.

In case you haven’t already seen it floating around the interwebs, I had to post it.

Members of Free Art and Technology (FAT), the Graffiti Research Lab, and The Ebeling Group communities have teamed-up with a legendary LA graffiti writer, publisher and activist, named Tony Quan, aka TEMPTONE. Tony was diagnosed with ALS in 2003, a disease which has left him almost completely physically paralyzed… except for his eyes. This international team is working together to create a low-cost, open source eye-tracking system that will allow ALS patients to draw using just their eyes. The long-term goal is to create a professional/social network of software developers, hardware hackers, urban projection artists and ALS patients from around the world who are using local materials and open source research to creatively connect and make eye art.

This project, which I’ve posted about before, was developed using OpenFrameworks, a cross platform c++ library for creative development (somewhat similar to Processing, which uses Java as its base), is hugely inspiring. A project like this shifts the role of the artist / the programmer / the open-source advocate in a really interesting way.

Not that we have the technical skill base to develop anything near this in terms of software / hardware, but this project is a perfect example of why I still get excited by the idea of working in that medium. 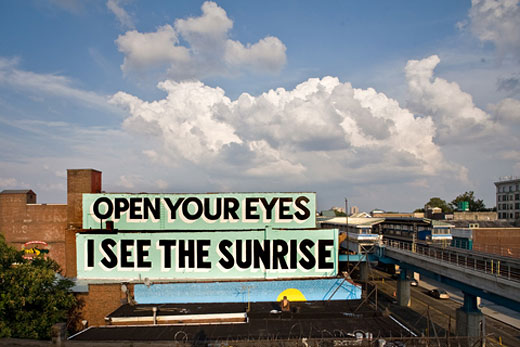 In Philadelphia, an artist named Steve Powers is working alongside the Philadelphia Mural Arts Program to create this large-scale mural project that paints huge sentiments of love letters onto the sides of 50 buildings on one street.

The project is called A Love Letter For You and totally made me think that there might just be potential in murals after all.

Take a look at the project blog and read it from first post to the most recent, it really gives some great context to the project.

[via an email from Nathan]

SWEATSHOPPE is a new multimedia performance collaboration between Bruno Levy and Blake Shaw that works at the intersection of art, music and technology. Their project, Light Painting, is pretty slick, using a LED-tipped paint roller along with some custom software and projector to reveal a video projection through painting movements. 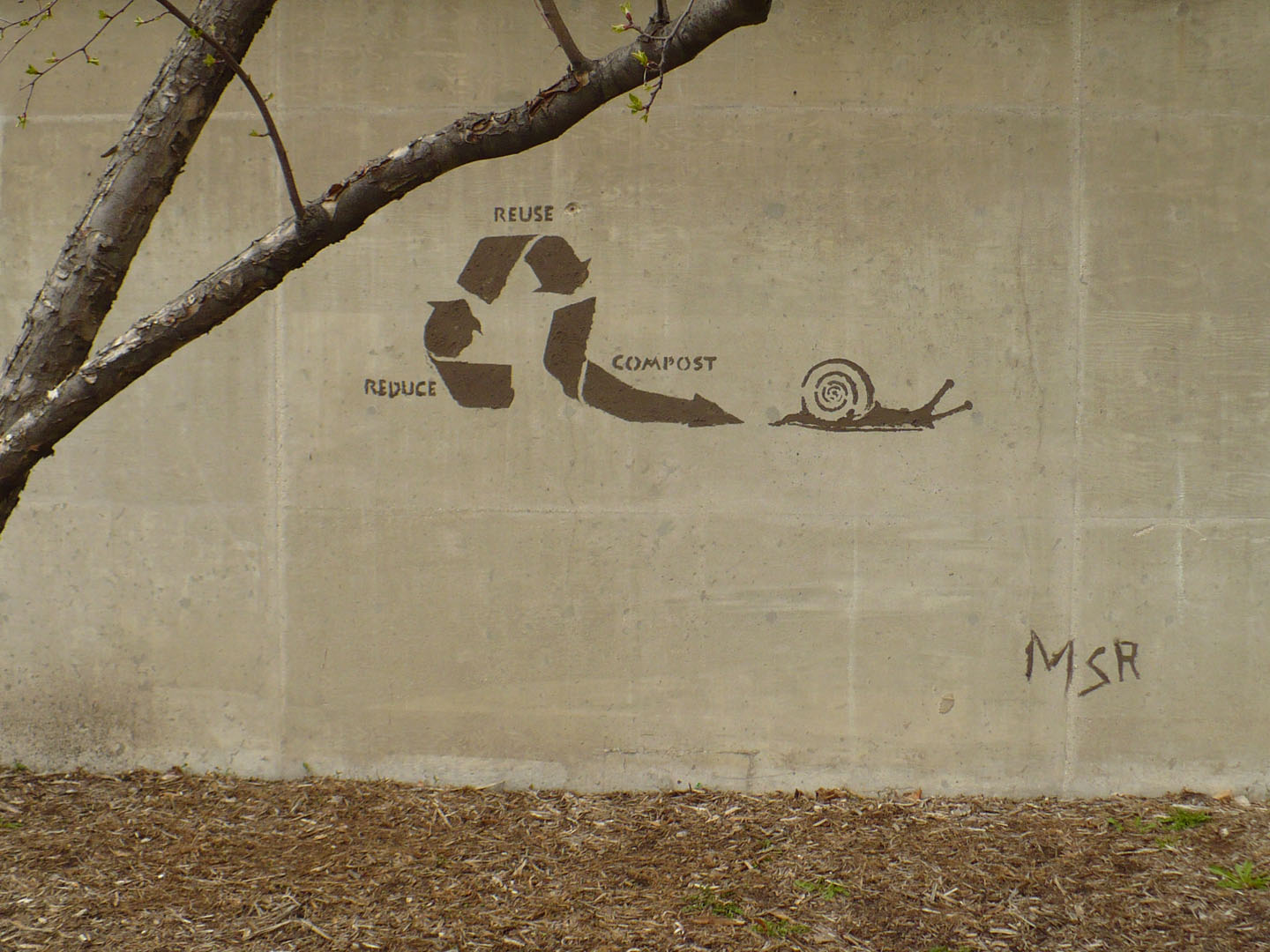 Jesse Graves, a Milwaukee artist, developed the technique of mud stenciling to avoid the pesky illegality of traditional spray paint graffiti. The technique is great, even if the subject matter is a little boring.

Kind of wish we thought of it. 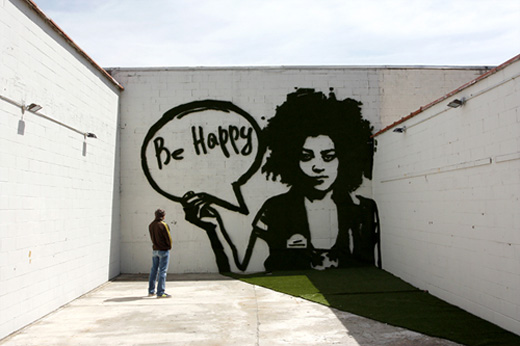 Given the recent conversations around the installation of astroturf on the Dougall gateway, I had to post this. Made by Alina and Jeff Bliumis, Be Happy uses astroturf to illustrate a photograph of one of many interviews in which the artists asked people shopping in a Russian bookstore to share their American Dream.

Graffiti Research Lab, FAT Lab, and a number of likely affiliated technologists, artists, and graffiti writers are spending the week working on an eye-tracking system attached to a pair of plastic frame glasses to write graffiti with light. From what I gather, this would allow them to avoid using those super-powerful lasers.

Follow their adventures on the blog, or on their own twitter-esque microblogging tool, fucktwitter, based on the free software, Laconica. 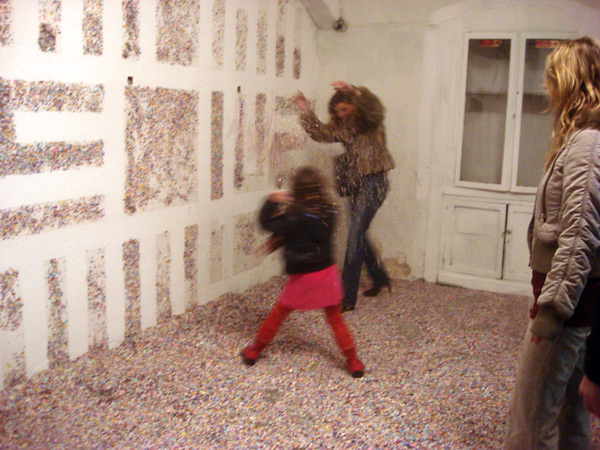 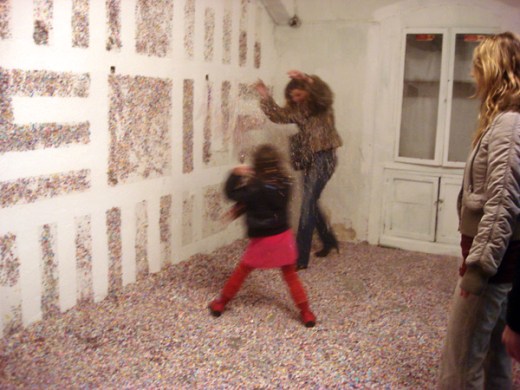 I can’t remember where I stumbled across Eltono’s work, but this project in particular seemed worth noting. Using double-sided tape and confetti, the gallery space starts off with the walls looking essentially blank (except for the double-sided tape designs) and a big pile of confetti in the middle. Fun if nothing else, I guess, right? There are some more photos of this project executed on the street at Eltono’s website. 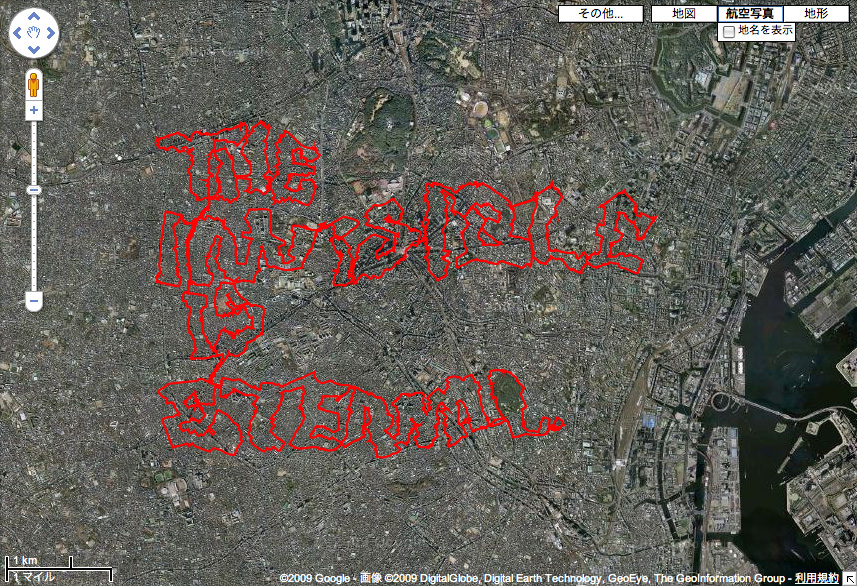 This project, executed by GRL Tokyo, took me a while to figure out. Basically this image, which reads “The Invisible is Eternal,” was made by riding a bike with a GPS device attached to it, then uploading the resulting kml file to Google Maps. It’s pretty insane to see this that this was done on a bike, though aside from that, I’m not sure about it (and the 19 minute video of the condensed bike ride doesn’t help either).

Maybe something is lost in the translation, but I think conceptually, this would have been better as a map made as a kind of algorithm to move the rider over some greater distances than he normally would, then documenting the experience of that process. Of course, in terms of how it was actually executed, that description is probably pretty close, but the reason behind doing it is different (writing / bombing without actually making a mark vs psychogeographic interests), and ultimately kind of dull.

I thought it was worth noting, given some of the Google Earth related projects we’re working on.