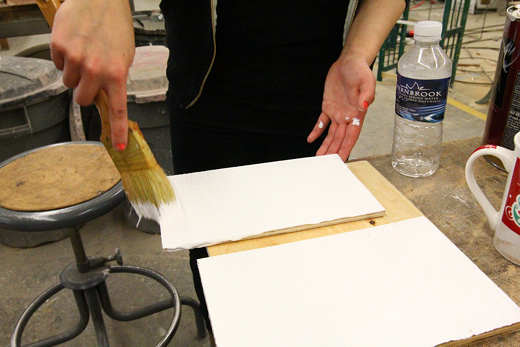 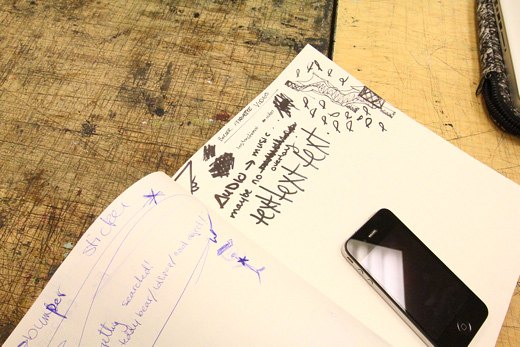 Thursday night was a night of decisions and tests.

We’ve spent the last couple of weeks just trying to get caught up generally with projects and Thursday marked the beginning of the deciding how to start wrapping up How to Forget the Border Completely and what direction to move in to make some more progress on our CAFKA project. 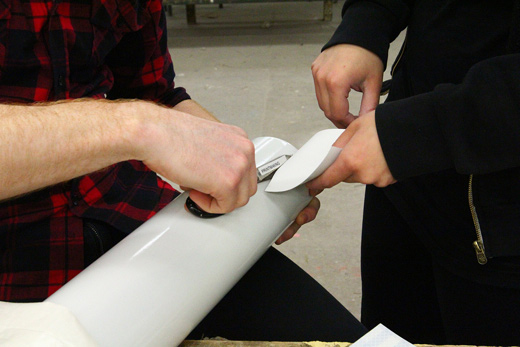 Michelle, Rosina and I spent the meeting assemble a real work plan for HFBC. Meanwhile, Karlyn, Kevin, and Hiba headed down to sculpture to test the retroreflective materials we received earlier in the week. 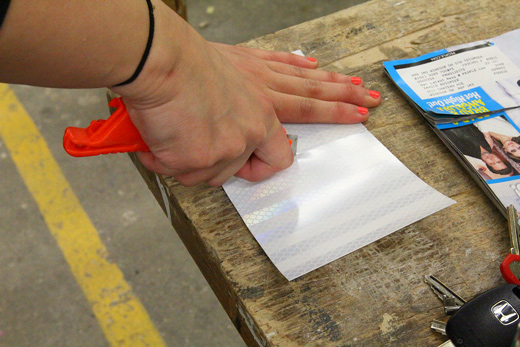 The prismatic sheeting is much stronger than the vinyl, being covered in a fairly thick plastic. 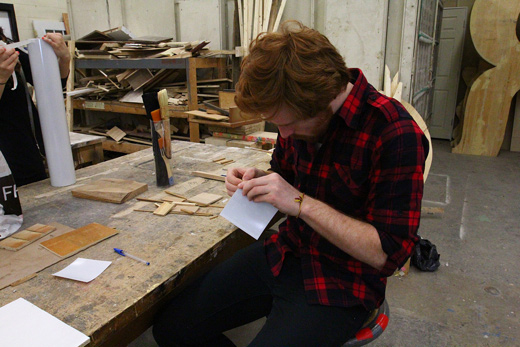 The vinyl is easier to peel, but also seems less sticky on its back.

They painted a couple scrap pieces of wood to try to get a better idea of the adhesion of each material. 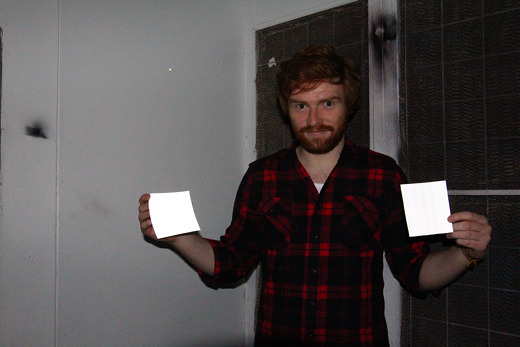 In the paint booth, testing the two materials with a flash. 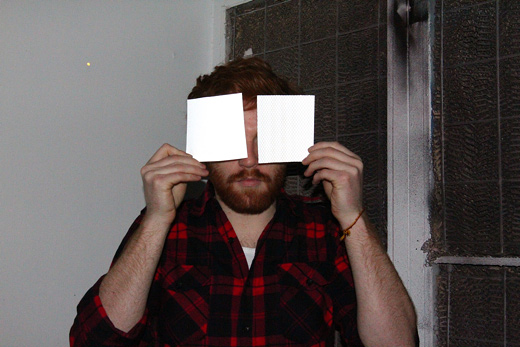 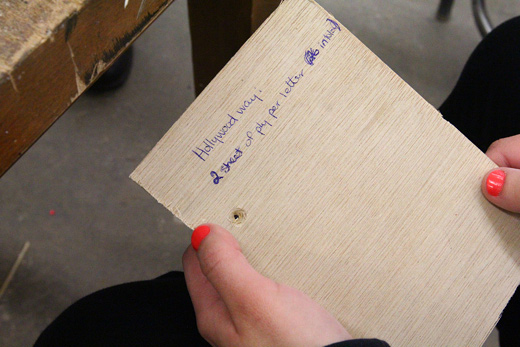 We’ve been talking about forgoing the 3D aspect of these letters and making them more into a Hollywood style text-work. 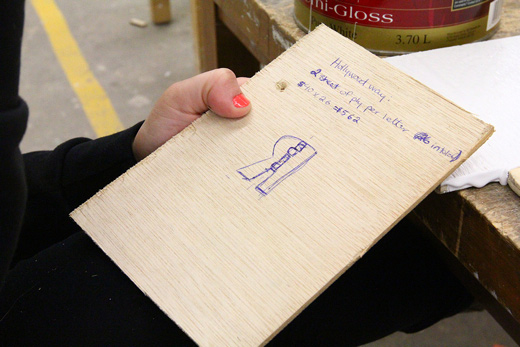 The 3D aspect has been the continued frustration and difficulty in moving the project ahead. Josh, Hiba, Kevin, Karlyn, and Rosina have tried to meet a couple of times, only to have to be stalled because of delays in getting the right wood, the tools, etc. 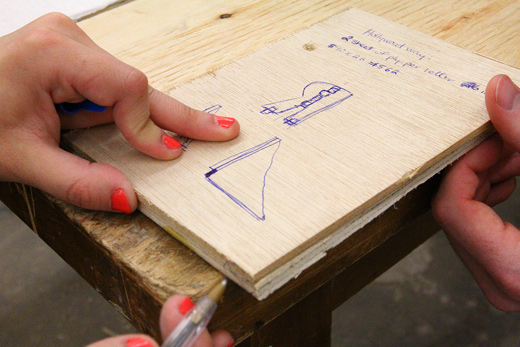 Hiba sketches out plans for bracing of a flat-style sign. 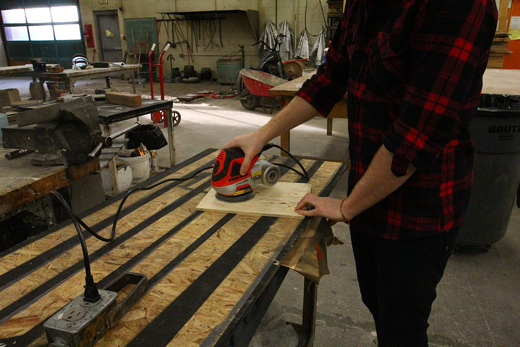 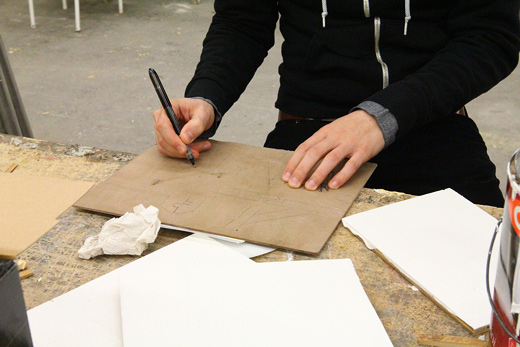 While waiting for the test paint to finish drying, I went to sit down with Kevin, Hiba, and Karlyn to figure out how we could best move forward, and I think we made some really good decisions. 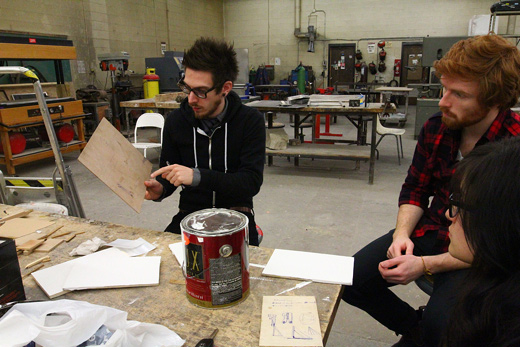 First, we decided that since the letters need to be spread across two sheets of plywood, they should be glued together ahead of even drawing the letters onto the wood. Kevin and Hiba are going to look into what kind of joint could be used on 1/2″ or 3/4″ plywood so that we can work with an 8×8′ sheet of wood, rather than trying to keep two 8×4′ sheets together while projecting the letters for tracing. While this methodology would make either the 3D or flat-letters easier to work with from the start, we’re really leaning towards the flat-letters. 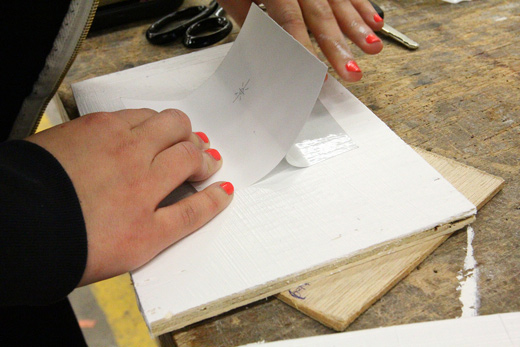 With the paint dry, back to tests. Putting the vinyl on required some finesse. 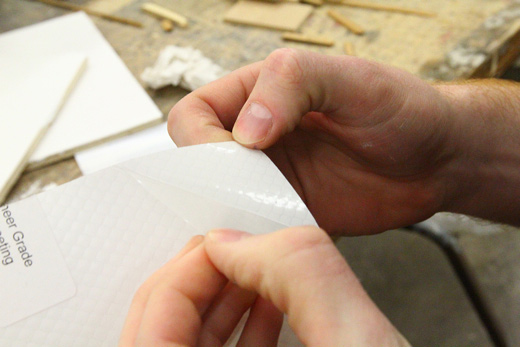 The prismatic sheeting is a lot thicker… 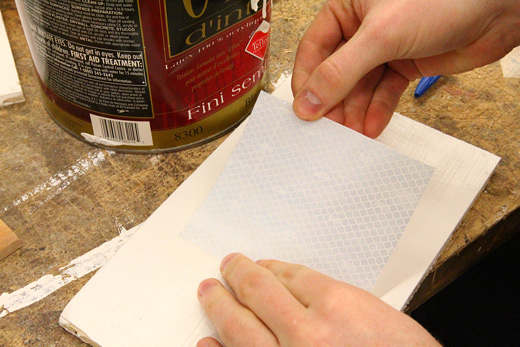 … so it went down a lot easier than the vinyl. 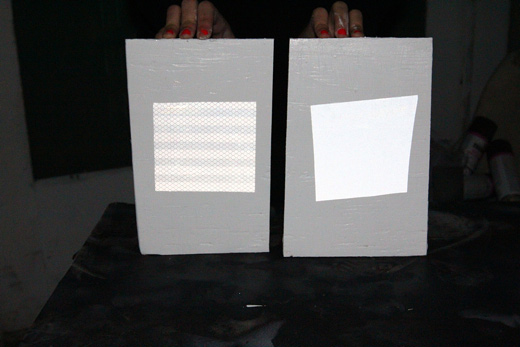 More tests, which are a bit misleading. While you can see the pattern on the prismatic sheeting (on the left), the distance is rather close. When the letters are actually installed, the viewer really won’t see that. 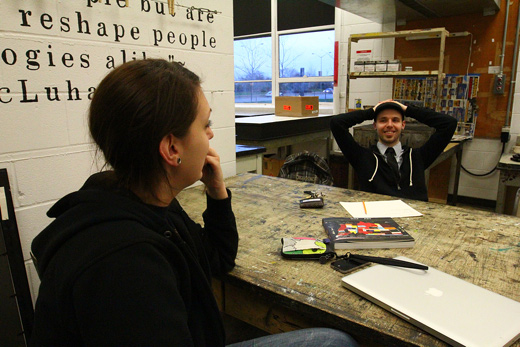 Back over in the printmaking room, Josh arrives and we firm up the plans for HFBC completion. We’re going to be making a lot of stuff for distribution, the plan is to start on Wednesday morning. 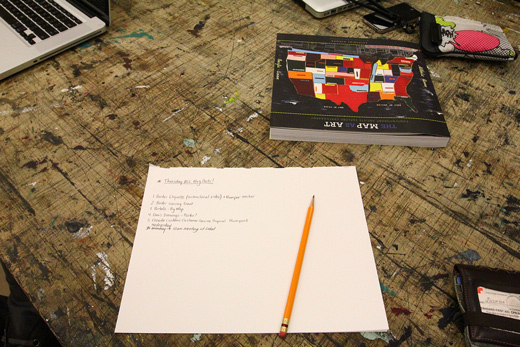 Some of Josh’s well-written plans. 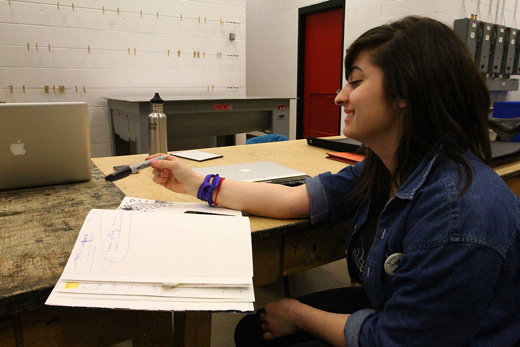 Rosina reluctantly agrees to posting on the blog once a week, along with Michelle! 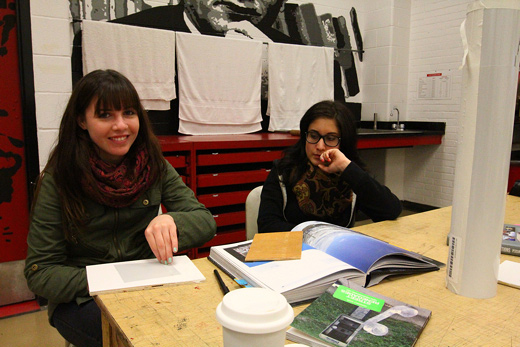 Karlyn and Hiba looking at the vinyl, trying to peel it up to test its durability . 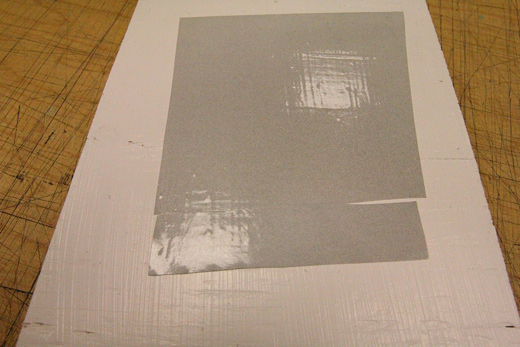 We overlapped some of the vinyl material to see if the seams would show up and it’s somewhat visible. 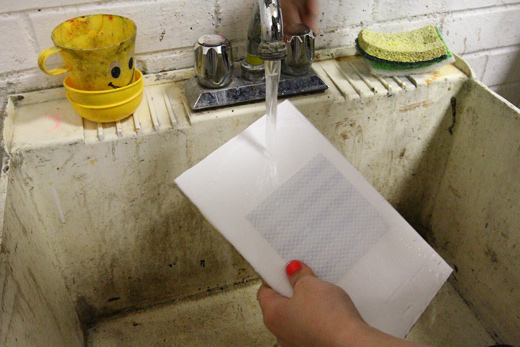 Also did some very unscientific water tests. Above, prismatic sheeting. 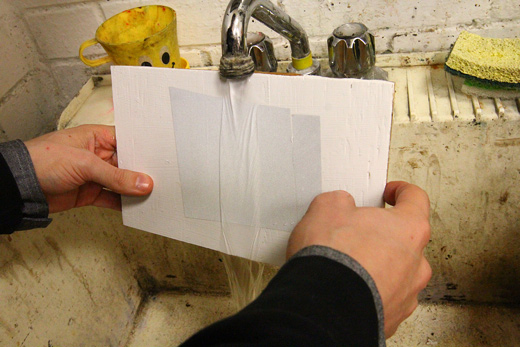 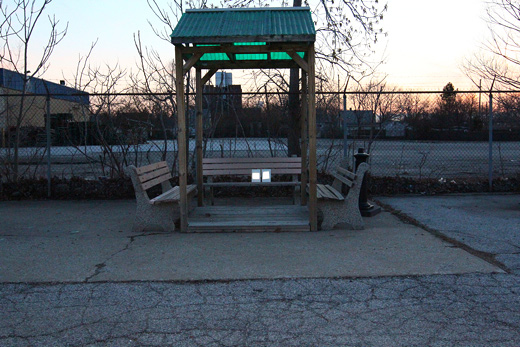 Then onto outdoors tests. The primastic sheeting is on the left, vinyl is on the right. 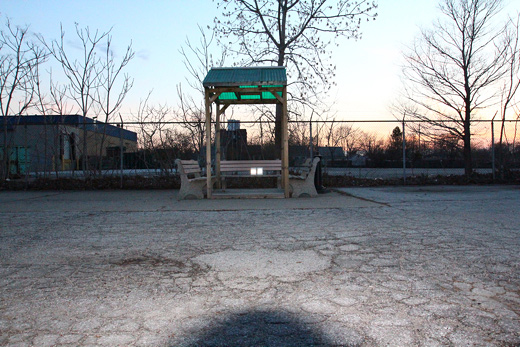 The prismatic sheeting is definitely brighter. 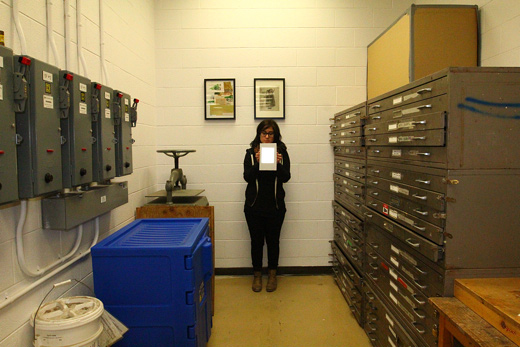 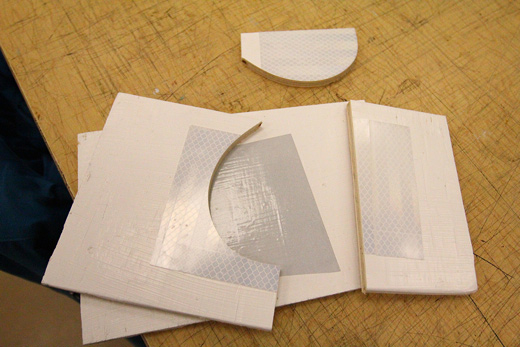 Then to the ban saw to test cutting the material when it was already applied to the wood. 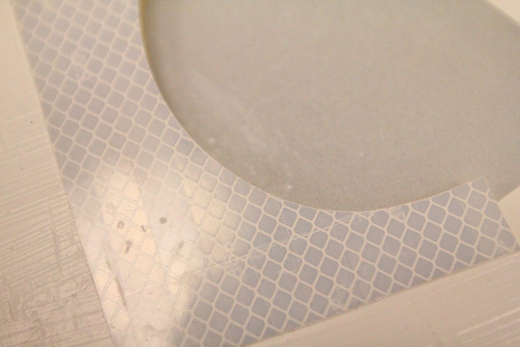 The cut is very clean, which means that we’ll likely move ahead with applying the prismatic sheeting to the wood before tracing the letter faces and cutting, as it will be excessively difficult to try to match up pieces of this material around curves that are already cut. Since the material survived the ban saw and did so without any fuss, we’ll measure the width of each letter and then figure out how many strips of this material (which is 24″ wide on the roll) we’ll put onto the 8×8′ plywood before tracing and cutting. Ideally, this will make it much easier to match up the lines and seams and make for an all-around cleaner finish.

Things invariably take more time than we ever imagine they do. But, being able to make some decisions and feel really confident about them is exactly what we needed. We’ll rent a Uhaul this week to get all of the plywood we need to start joining two 8×4′ sheets together so that we can have one massive 8×8′ sheet of plywood for each letter.

After Wednesday, we’ll also have more to report on what comes next with HFBC and how you can participate. It’s going to be great!!!!!