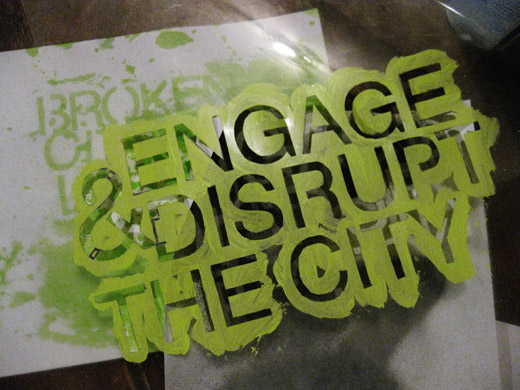 In preparation of the upcoming event, and in response to our sudden acquisition of 4 t-shirts, we spent Tuesday evening making stencils, shirts, testing Tetris 2, wheatpasting, and figuring out the logistics of a video game tournament.

First thing on the list of to-do’s was to test my custom wheatpaste applicator. The results were mixed, though I attribute some of the difficulty to the surface onto which we were wheatpasting and the paper itself. However, I think I’ve already solved the other concerns (specifically, the angle at which one needs to hold the applicator to get it to work).

The paper was insisting on coming off of the pole… Danielle and Josh secured it as Michelle wheatpasted.

Josh takes on the challenge of cutting out the Broken City Lab part of the stencil for the t-shirt. The main challenge being the “.org” part at the end.

Michelle works on tracing the front of the shirt. We spent some considerable time trying to decide how to make the “&” work.

Michelle and Josh working with utility knives, I liked all the letters that came off the mylar.

I dig through Michelle’s box of videogame stuff to find a working adapter and video cables.

It took a while to get it up and running, and now I can’t remember what the eventual solution was, but Danielle steps up to test Tetris 2.

Michelle with the front of the t-shirt stencil.

We got these cans of spray-fabric paint—it came out kind of watery, but ended up working for the base coat.

Hairdryer to dry the undercoat.

This was the first shirt, we ended up realizing the text was a bit too high after the fact.

Josh takes over painting with thicker fabric paint the front of the shirt.

Michelle and I test the average game length for 2 player Tetris. Danielle and I had previously played multiple games over the course of 30 or 40 minutes, but continually forgot to time ourselves.

Josh laying down the stencil for shirt number two.

The stencil in waiting.

Tonight is going to be awesome—bring your skills.