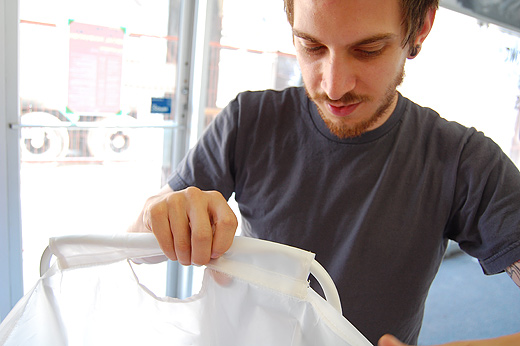 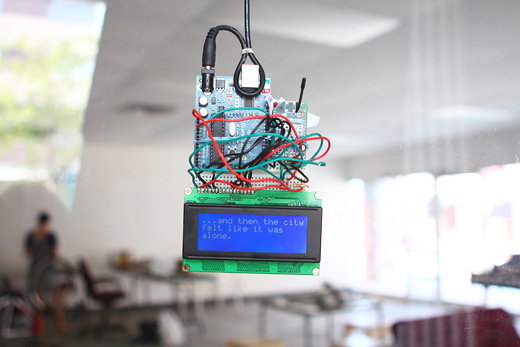 Thursday was the Storefront Success Stories Speed Dating for Store Owners event down on Pelissier for SRSI, and Justin set up a window installation using the Arduino. 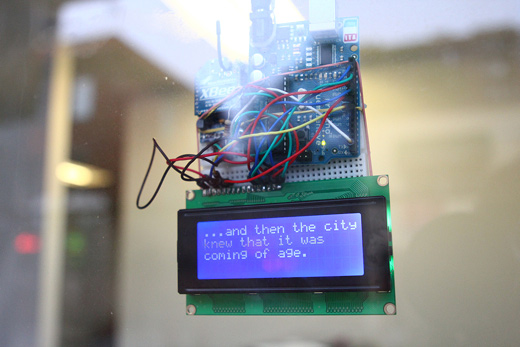 Using the same format as the text on the billboards running in Windsor until July 15th as part of the conclusion of Save The City, The Arduino in the window is displaying a list of sentences creating a randomized narrative of a city. 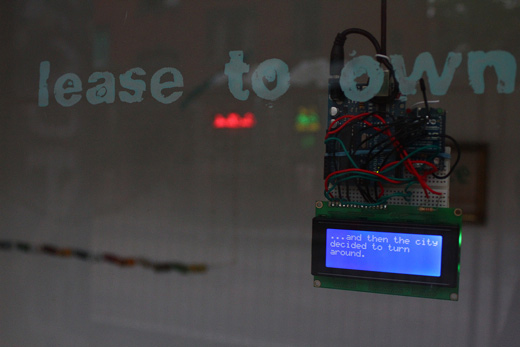 This pieces highlights the organic nature of cities, which go through boom and bust cycles over time. 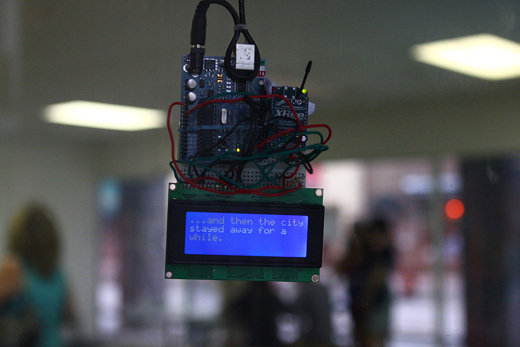 The narrative of a constantly shifting city is important to Windsor, in it’s current state of regeneration and regrowth. 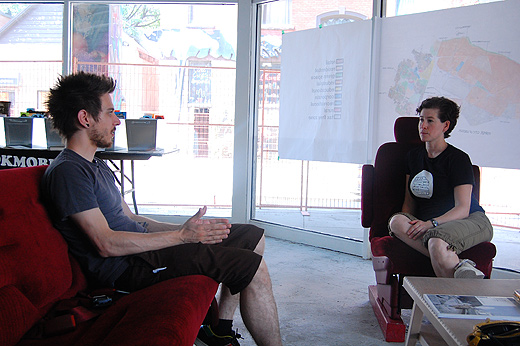 Lee and Justin had a conversation in the Bookmobile Reading Room filmed by Daragh for his SRSI documentary. 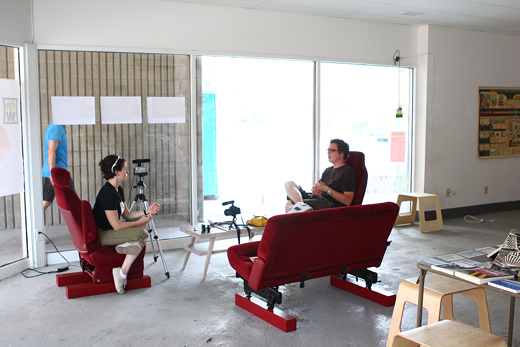 Later on, Lee interviewed Daragh for her own research purposes.

Justin was happy about his mended laundry hamper that Miss Em’s Friendly Services sewed and returned to him. 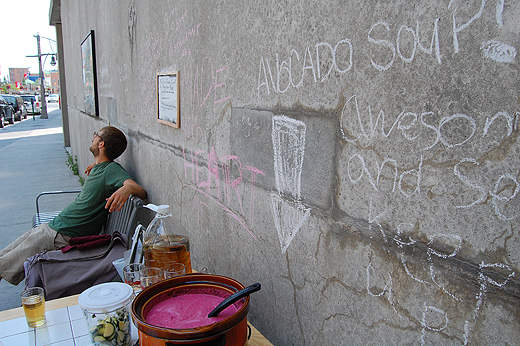 Emily returned to the heat to set up her free lunch and tea outside. 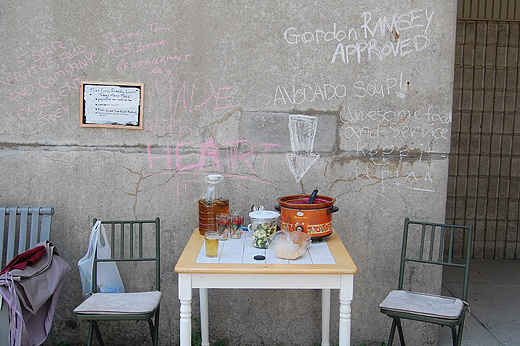 She added some chalk to the concrete wall to attract some hungry passersby. 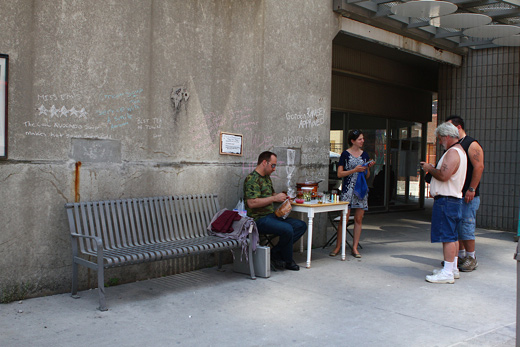 She has been getting excellent reviews on her fresh veggie creations and is making a recipe book that will be available after she goes back to Sault Ste Marie. 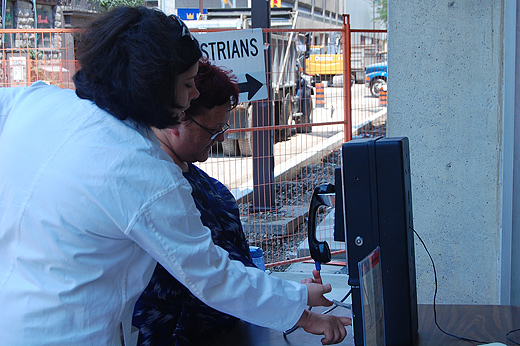 Laura was in Bell Payphone Labs character as she gathered consumer reviews for the GMBLL design. People had mixed reactions to the payphone turned gumball machine, thinking it was either a clever idea or not so practical. 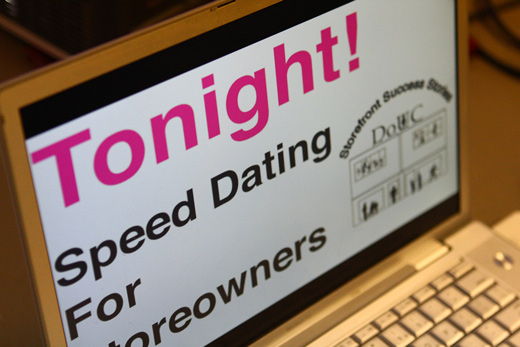 Chris and Simon were well prepared for their Speed Dating for Store Owners event held in 406 Pelissier. 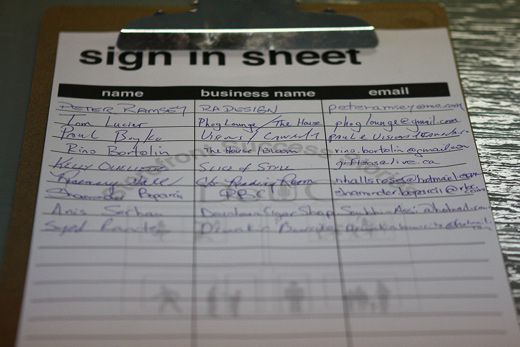 They had a great turnout, there were 20 store owners n the downtown BIA who participated in the event. 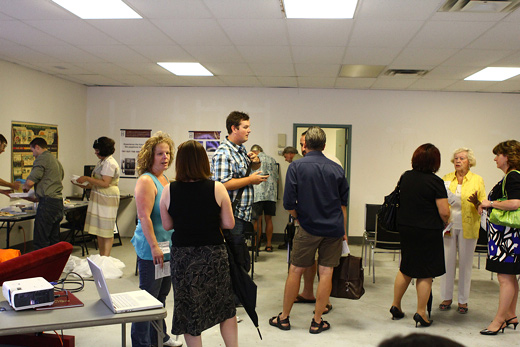 The business owners had a good time meeting each other and discussing issues related to the success of their stores. 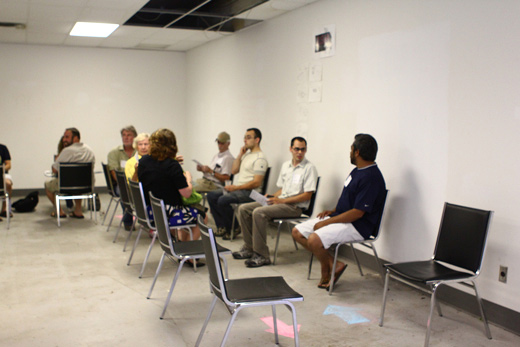 After almost four weeks of hard work facilitating this event among other things, Chris and Simon stepped back and let the participants lead the discussion. 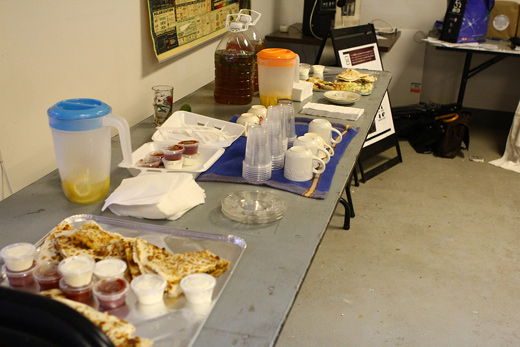 Food for the event was generously donated by Drunkin’ Burrito. 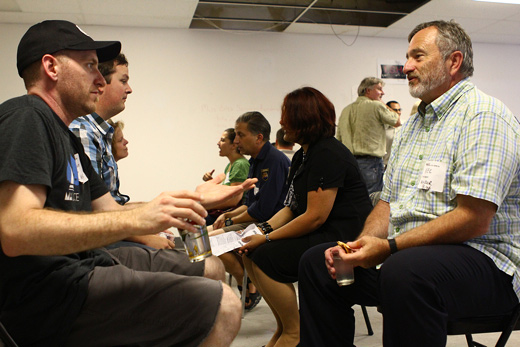 Having a wide range of types of businesses represented at the event, from retail stores to bars to community organizations, was crucial to the success of the meeting. It seems as though the participants left with some fresh ideas and plans to meet up again on a regular basis. Great Job to the DoUC and to the business owners for all their hardwork revitalizing and redefining the downtown core of Windsor!