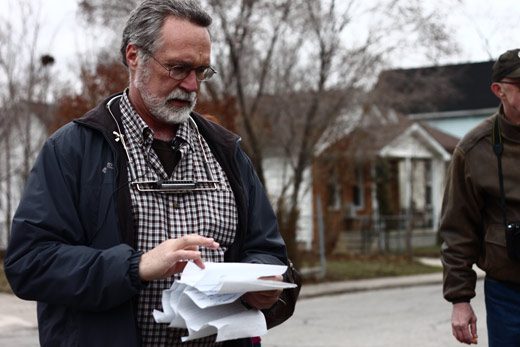 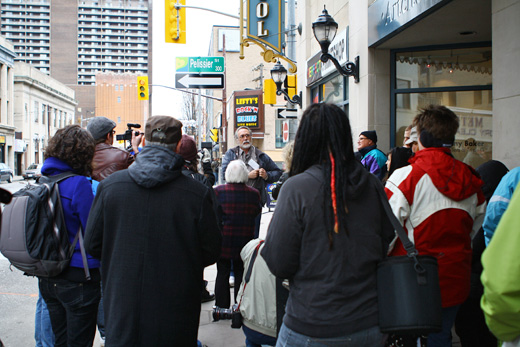 We had an incredible turnout for Sing to the Streets. The response was overwhelming, and despite the cold, we managed to get a great overview of some of the folkloric history of Windsor and Detroit and learn some Francophone folks songs along the way.

The Save the City project is really giving us a lot of insight into the things that make Windsor the city that it is — hyper-localized pronunciations and all. That idea, in particular, spurred a 2-hour conversation on a local radio station, and a great article in the Windsor Star on Monday, which was just a bonus after being able to spend the afternoon immersed in folklore and great company.

We’re a little over halfway through the Save the City project, but there’s still a lot more to come, so if you’ve been meaning to come out, but haven’t had the chance yet, check back soon, as we’ll be posting the date for April’s event any day now. 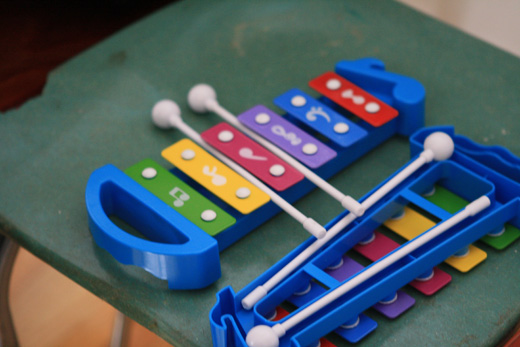 The afternoon started off at BCL HQ, getting the route organized, and going over last minute details (some of those details involving toy instruments.) Any impromptu parade needs some basic instrumentation, right? 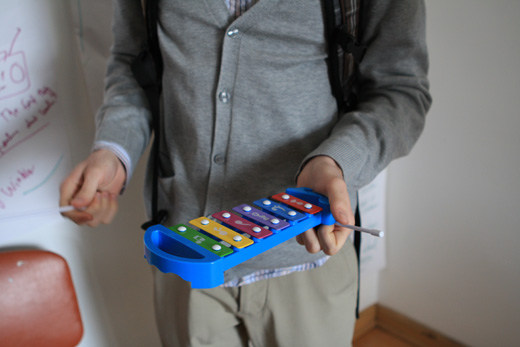 Rosina had headed to the Dollar Store to pick up a bag full of fun toy xylophones, recorders, and lots of tambourines to support the folk song performances that were were going to do once Sing to the Streets got underway. Josh took to the xylophones right away. 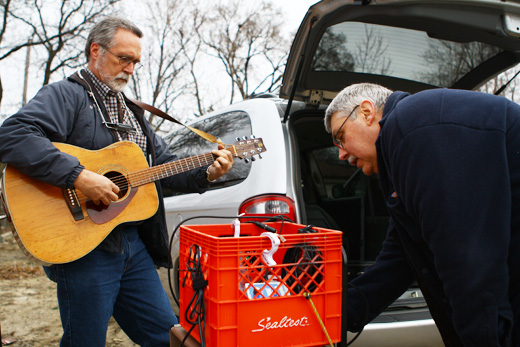 Meanwhile, with some more serious instruments, our guest for the Sing to the Streets event, Marcel Bénéteau was tuning up and testing the mobile amplification system that Michelle’s dad, Bob Soulliere of Cardinal Music hooked us up with! 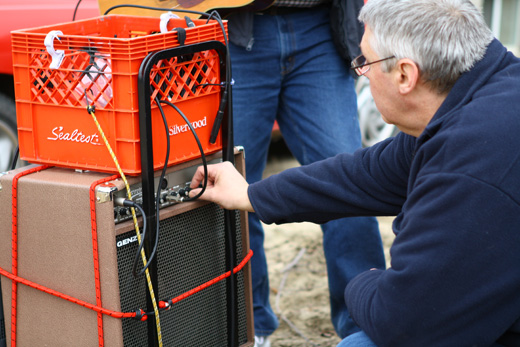 This amp / cart / wireless microphone mix was exactly what we needed to pull off this event, or so we hoped. We weren’t sure what the turn out was going to be like, given the weather report’s threat of rain and the drop in temperatures. 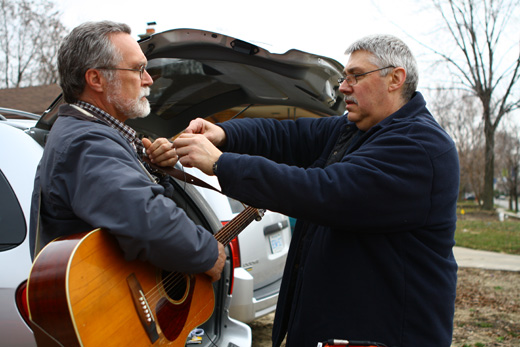 Marcel being wired up with the wireless mic. 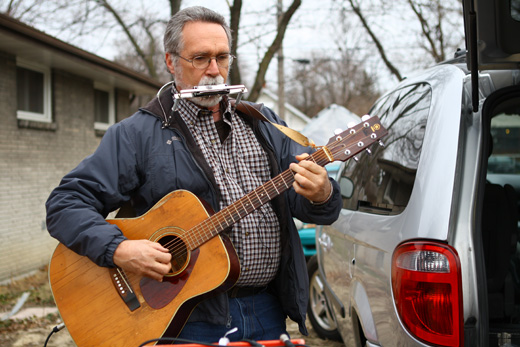 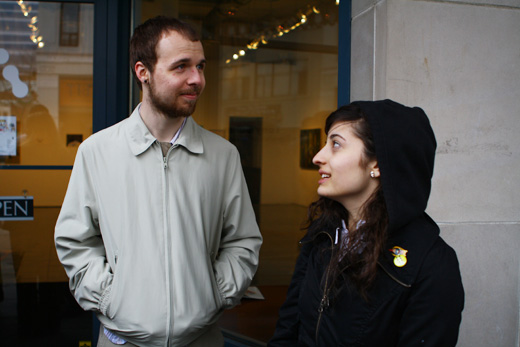 Downtown, waiting for the walk to begin, Josh and Rosina look optimistic for the turn out. 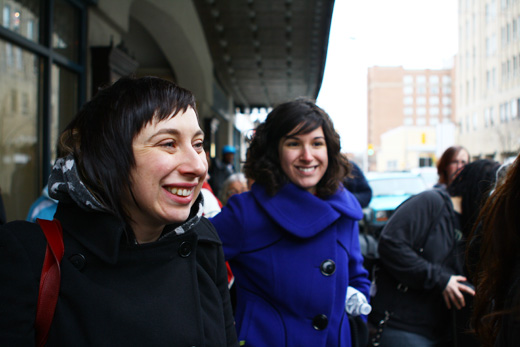 Lucy (who has been coming down with Daragh for almost every Save the City event to document the process) and Danielle’s sister, Jessica are as excited as we all were when we realized the huge crowd of people in front of the Capitol Theatre were there for our event! 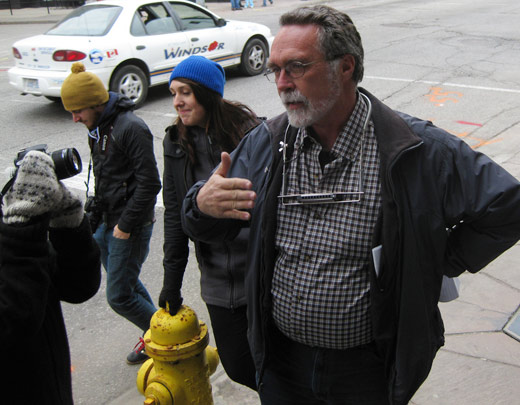 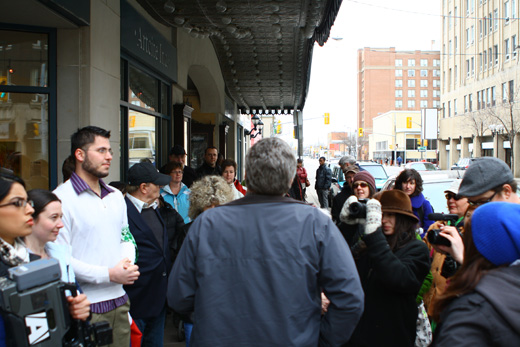 … And Marcel starts his storytelling right away to a whole bunch of Francophone Windsorites! 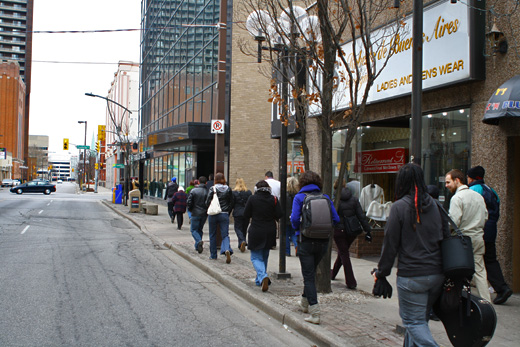 Shortly after the introduction, we head east along University — this was just part of the crowd that came out, again we were so excited to get to share this with so many people! We wound around to Pitt Street and then back down Goyeau to University to avoid the cold. 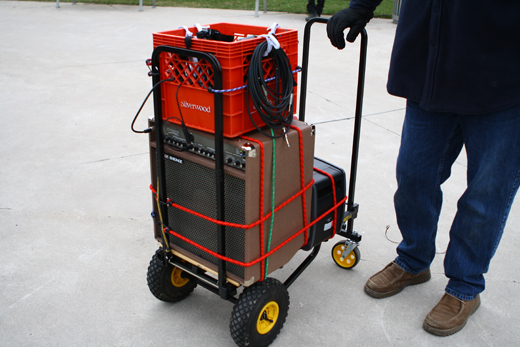 We make our first stop across the street from Charles Clark Square and Bob turns on the rig. 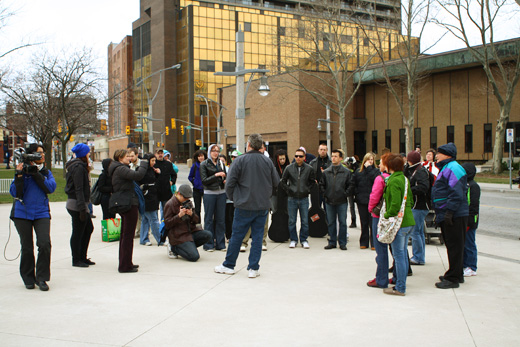 Marcel starts his story on the Jesuit pear trees, in which a widow cursed her brother-in-law beneath 12 trees, some of which are still around the city and maintained by local residents. 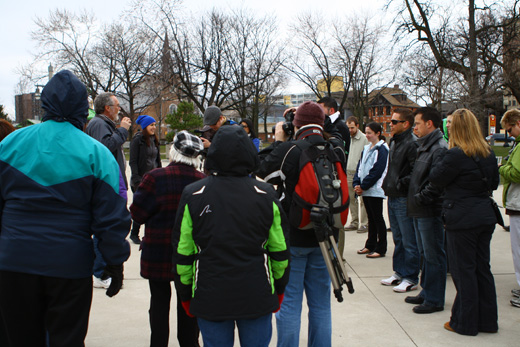 The crowd listens on to Marcel’s story, before heading further east.

While stopped at Louis, Marcel went over his notes, compiling the winding story of Windsor’s Francophone history as we went. 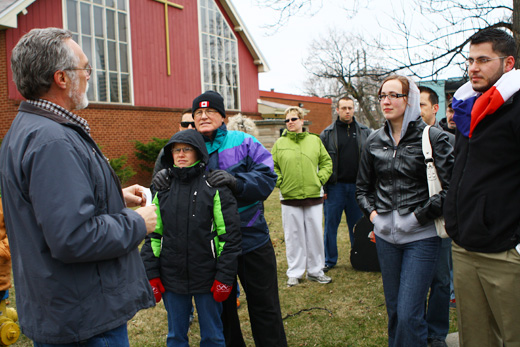 Marcel spoke about the history of the French families (including mine, somewhere far, far down the line), and then we headed back west to find a good place to start our songs! 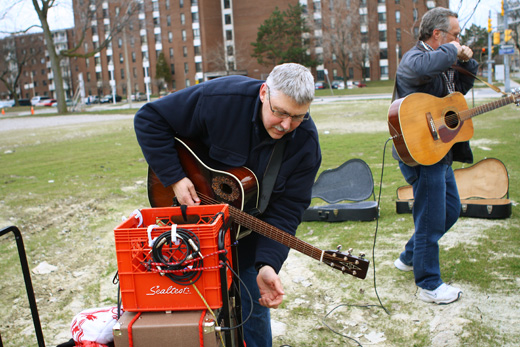 Bob and Marcel set up in the vacant lot at University and Aylmer. 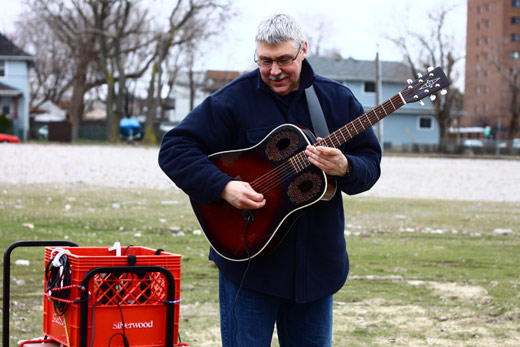 Bob waiting for his cue! 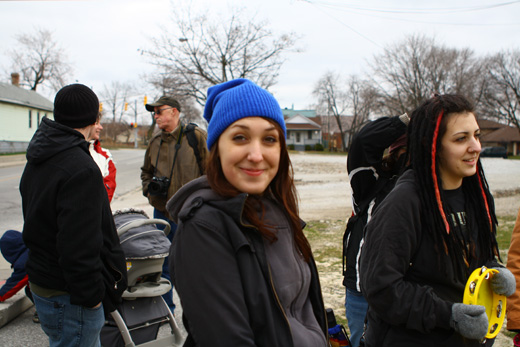 Michelle — super pumped at how the event turned out! 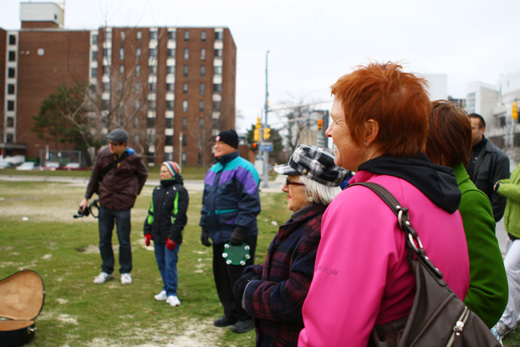 Some of the folks who came out listening to Marcel’s take on traditional french folksongs. 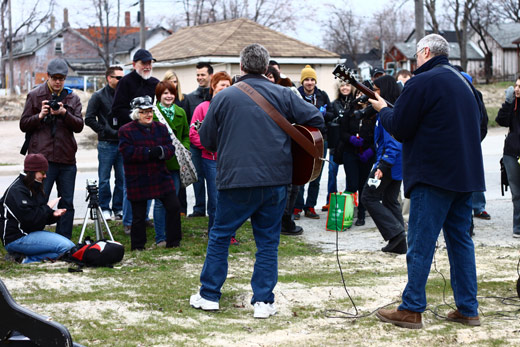 Some of us tried to sing along (myself included, though I definitely couldn’t catch all the words), but it was amazingly fun to get to share in this discovery of a part of our city’s history. Some of these songs were 300 years old!!! 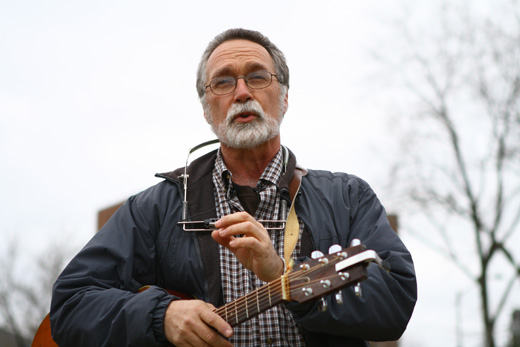 Marcel leading the group in the final acapella song. 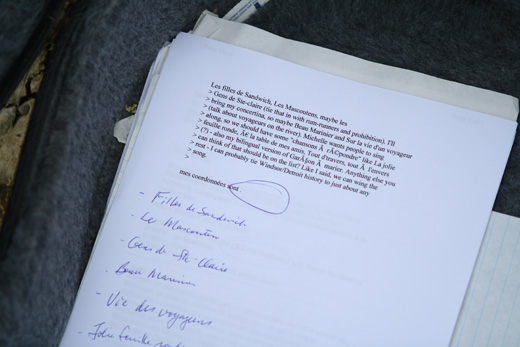 Some of Marcel’s notes, waiting for him in his guitar case… 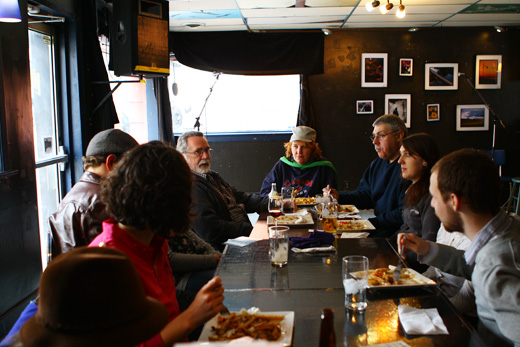 And after the songs were done, and we had packed up and headed back downtown, we settled in at Phog for some poutine (how could we not?)

Thank you to everyone who came out and shared this with us! We know a lot of people are interested in doing something like this again in the warmer weather, so we’ll definitely see what we can do. In the meantime, keep checking back for the next part of the Save the City project.

3 Replies to “We Sang to the Streets!”