Late last week, two Portland artists–Nicole Lavelle & Sarah Baugh–arrived at CIVIC SPACE in a brown Volkswagen Westfalia camper van to spend a couple weeks exploring Windsor and eventually designing a Windsor Tour Guide publication. They took a few minutes yesterday evening to ask each other questions about what their collaborative project at CIVIC SPACE will entail. 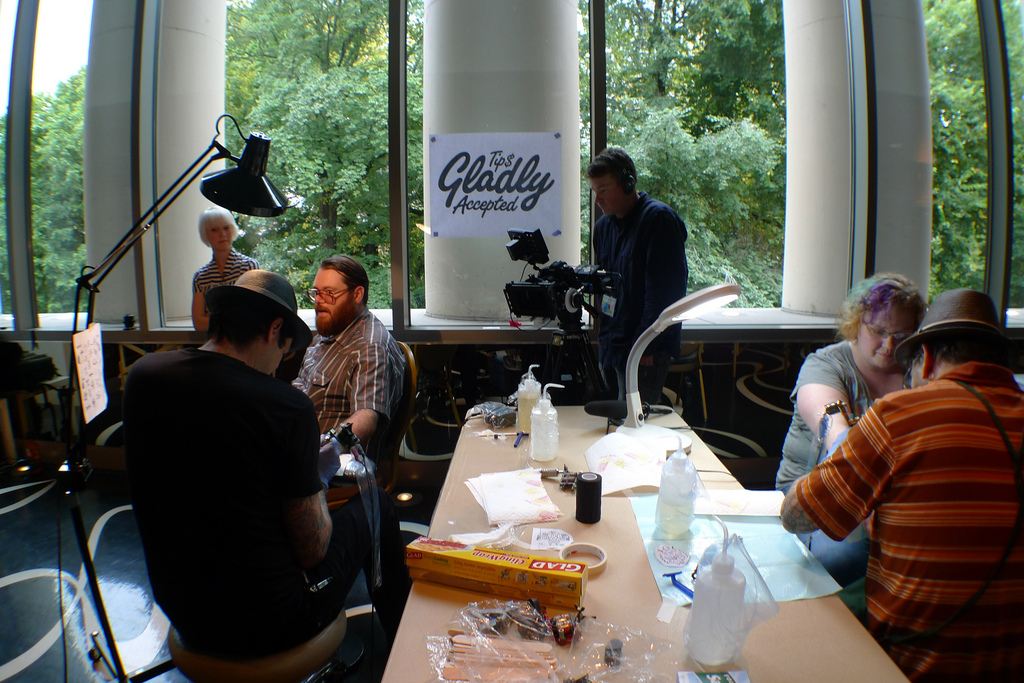 Photo by Jason Sturgill from Art is Forever.

Tattoos have been a long-lasting part of our cultural history, revealing glimpses of where we’re from, where we’re going, and who we think we are. Windsor is Forever is a new community-driven art and tattoo project that will give residents of Windsor an opportunity to make a permanent mark, on themselves.

Conceived by Portland-based artist, Jason Sturgill, Windsor is Forever will kick off on this Thursday, February 27th with Sturgill taking over CIVIC SPACE hosting events, doing archival research, and speaking with members of the community. Residents are encouraged to come meet Sturgill at CIVIC SPACE from February 27th to March 3rd to talk about their favourite places, landmarks, and people in the city. Sturgill will also be looking for Windsorites to give him guided tours of their favourite  places so that he has source materials for open sketch night where the tattoo designing will begin. That sketch night begins at 7pm on March 4th, with Sturgill co-hosting ACWR’s Sketch Night at CIVIC SPACE with local artist Dave Kant. This work will lead to the end goal of creating a series of Windsor-based flash tattoos ready to be inked onto members of the community.

Then, on March 7th, CIVIC SPACE will be turned into a FREE tattoo shop for the day, hosted by local tattoo artist Dave Kant of Advanced Tattoo. Residents that want to receive a tattoo will be asked to choose from the flash sheet that have already been designed.

Anyone eager to receive their Windsor tattoo or just interested in sharing a story is encouraged to fill out the form below with an explanation on why they believe Windsor is Forever!

*Please note that since the tattooing is only happening for ONE day, we have a limited number of spots open. So if you’re interested, please sign up below ASAP!

*We’ll be in touch by the afternoon of Tuesday, March 5th if you’ve been selected to receive a tattoo, along with an approximate timeframe for your appointment on Thursday. We’ll do our best to accomodate as many people as we can!

Justin heads to Portland to present at the PSU MFA Art and Social Practice Conversation Series this week.

The PASPWACS is a brand new series of presentations by people and organizations related to Art and Social Practice including artists, non-profits, writers, and architects. The presentations are free and open to the public and take place on Wednesdays at 1 pm at Field Work, an off-site social practice classroom and civic space at 1101 SW Jefferson Street, Portland, Oregon.  The conversations are streamed live and archived as podcasts. The presentations function as extended Q and A sessions with an expectation that participants and listeners will educate themselves in advance about the work of the presenters. The series is coordinated by PSU associate professor Harrell Fletcher and run by the graduate students of the PSU Art and Social Practice MFA program. For more information go to: http://www.psusocialpractice.org/

Also, an interview with Justin and his recent “Methodologies of Failure: Evaluation Practices for Socially Engaged Art” appear in the latest issue of PSU’s Art and Social Practice journal. 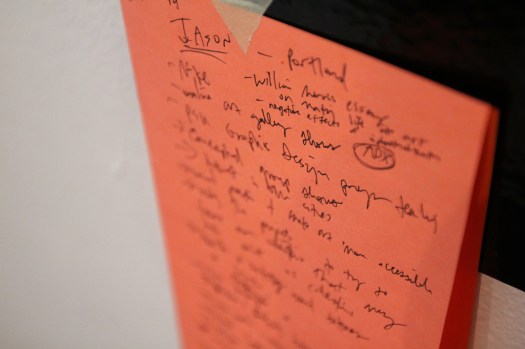 This afternoon at CIVIC SPACE started out with a video chat with Jason Sturgill from Portland about a really awesome project we’ll be collaborating with him on in the spring of next year. 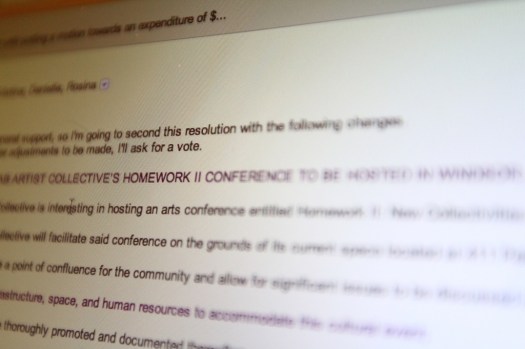 There is also talk of Homework II happening this fall…stayed tuned for more info on this. 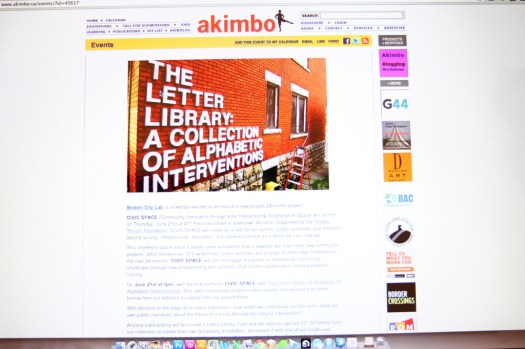 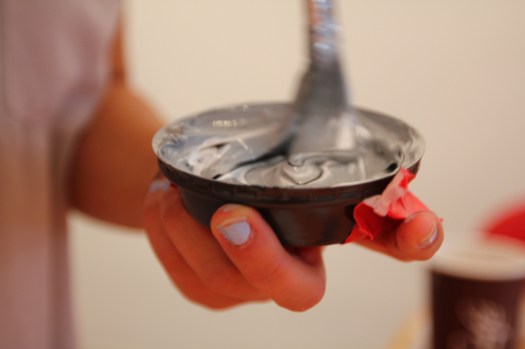 On the production side of things, we decided to do the final letter paint test for the Letter Library. While both white and black paint tests have had their pros and cons, we agreed on a final test of the colour grey to see if we can find a happy middle. 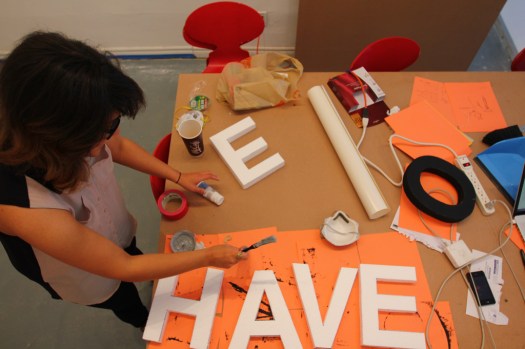 Word of the day today is: HAVE 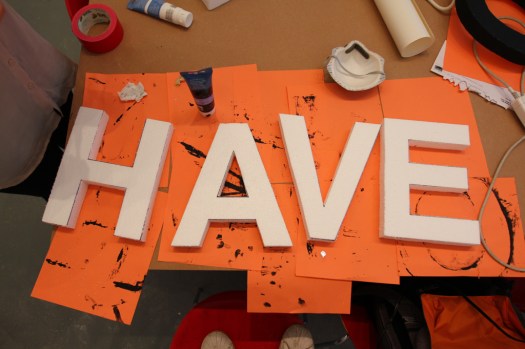 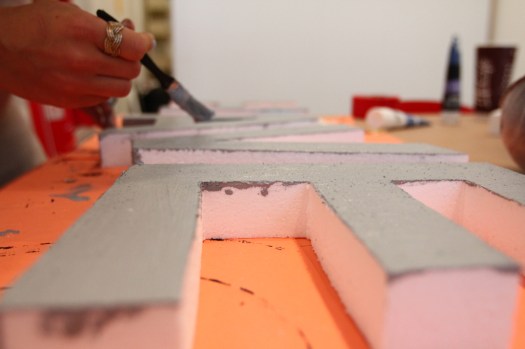 Before coming to the space, Hiba went to Michaels to grab some grey paint. All the grey paint was sold out (weird), so we resorted to making our own by mixing our black and white paint remnants. 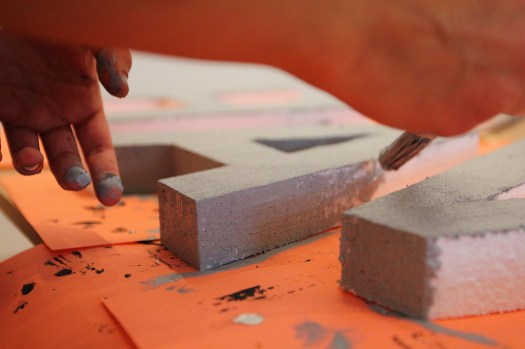 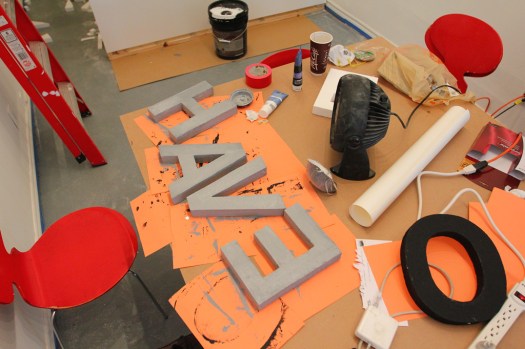 After the letters dried, we hung them up in the space to see how they fit. 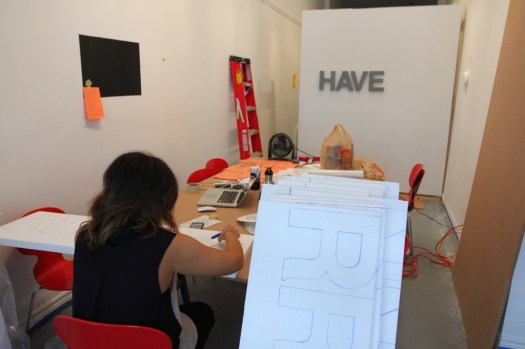 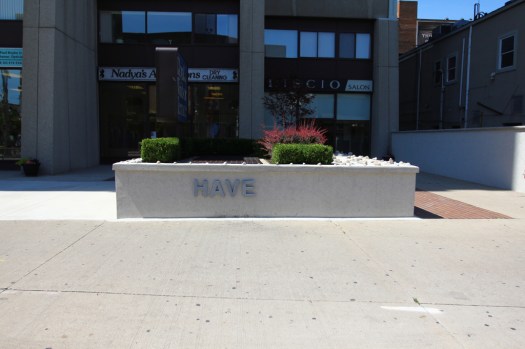 We took to the streets shortly after to take some install shots on different wall surfaces to compare with the white and black tests we did previously. 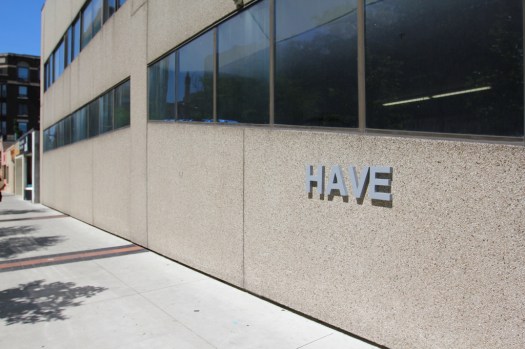 The grey has a nice pop, even on muted walls like this one. 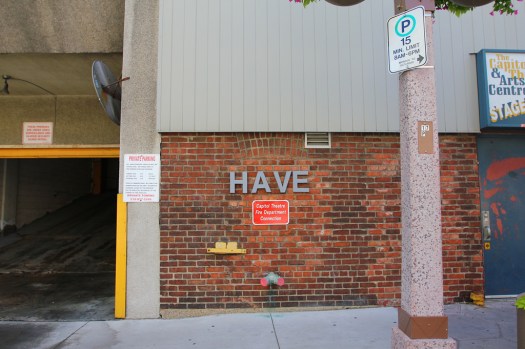 While white had a really great pop on brick walls, the grey letters have a very interesting presence. 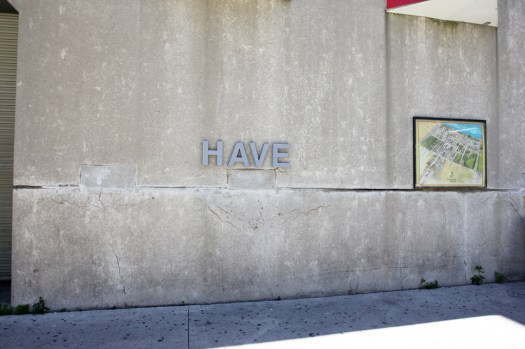 The shadows cast on the grey letters give them more depth, while the black letters got lost in their own shadows. The grey as the middle ground (in every sense) might win the day. It stands well on our white walls and looks interesting among the different textures of the buildings outside. Maybe we should sleep on it. 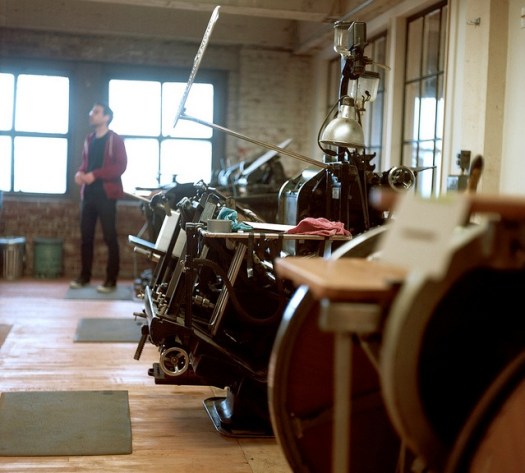 Work.Place is an awesome project by Portland photographer Carlie Armstrong which aims to document the spaces in which creativity is housed. I suggest browsing through a few of the photo sets; they are gorgeous. If this doesn’t make you want your own complete workspace, I don’t know what will!

via: The Best Part 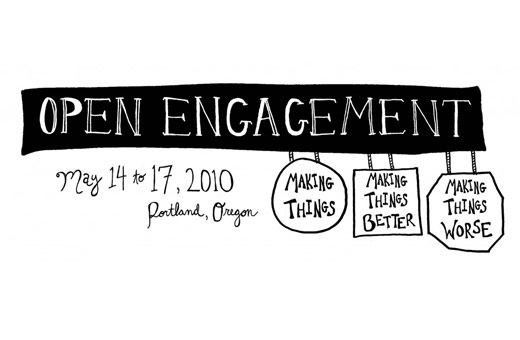 Danielle and I will head to Portland State University this weekend to participate in Open Engagement, the conference that asks questions like, “Does socially engaged art have a responsibility to create public good? Can there be transdisciplinary approaches to contemporary art making that would contribute to issues such as urban planning and sustainability?”

We’ll be speaking on the panel, Group Work: The Collective Impetus, along with folks from National Bitter Melon Council, InCUBATE, and students from OTIS’s Public Practice program.

This trip is going to incredible for a few reasons (including getting to see the city of Portland, in all of it’s functionality), but perhaps more importantly, we’re going to be able to speak to a lot of people who are engaged in a practice that is at least slightly aligned to what we do here in BCL. It’s more often the case that we go to a conference as some of the only artists in attendance (an interesting position to be in, but always a little lonely).

There’s so many conversations we want to have, the 3 days we’re actually there likely won’t be enough. 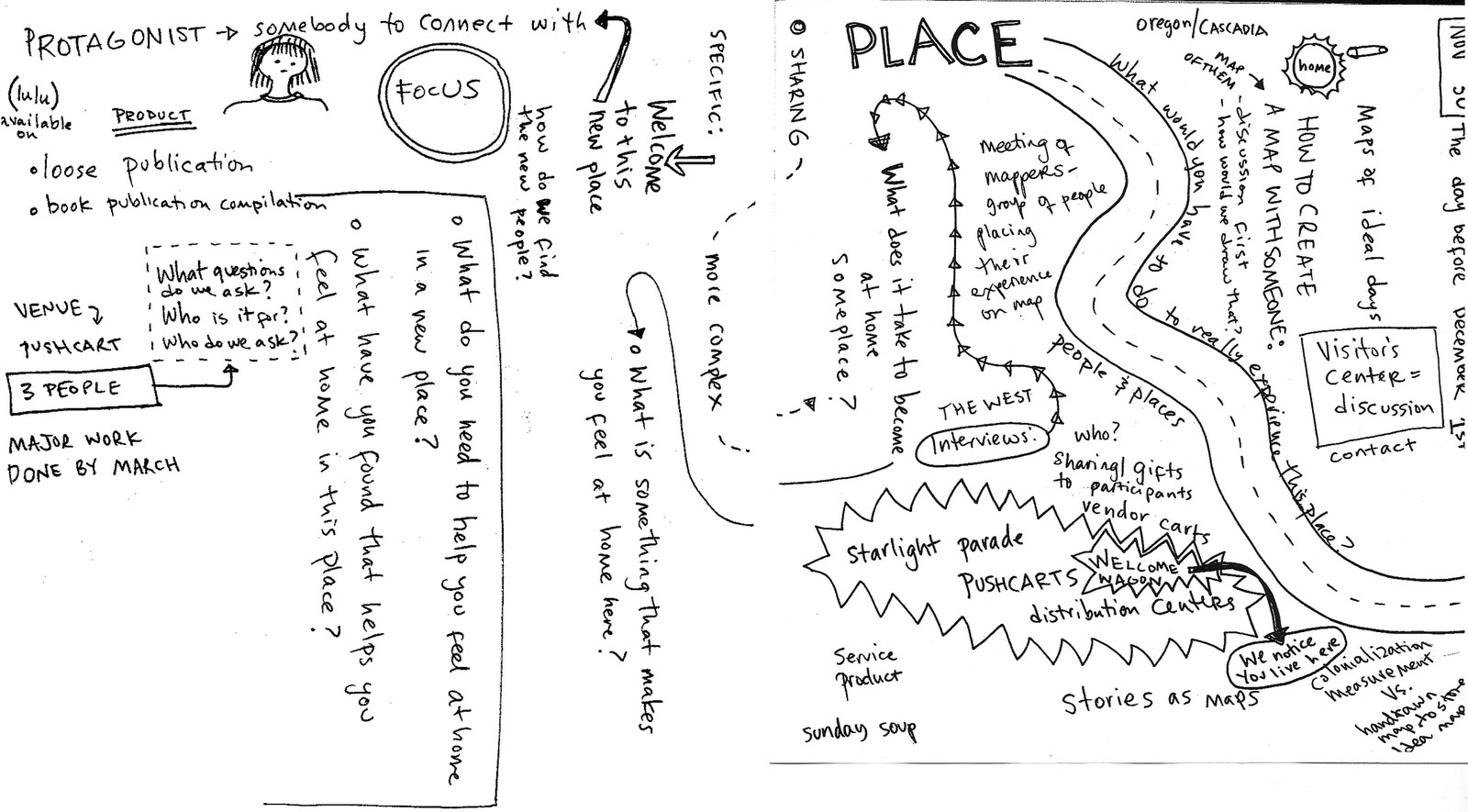 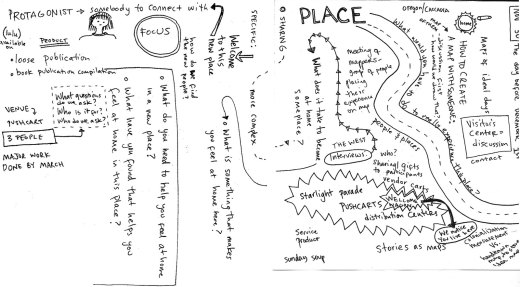 With our interest in mapping (and using the fancy technology of Google Maps to try to do so), I thought it might be interesting to post on this project, which is very much not about fancy technology. Katy Asher, a student in Portland’s MFA in Art and Social Practice program, along with Ariana Jacob and Amber Bell, have initiated a project that “aims to make a vending cart of maps made by people from Portland.”

This feels like an intersection of a number of projects we’ve discussed and are also ongoing in the community, and makes me wonder what subjective maps would look like for other Windsorites. Asking for people to map their routes to work, their favourite restaurants, their neighbourhoods would certainly provide an interesting look at the way distances and geography are collapsed or exaggerated and might help to discover some other broken parts of our city and the way it functions (or doesn’t).